The Public Health Ministry has decided to raise the nation's Covid-19 alert level following a rapid increase in Omicron variant infections, warning that new cases may surge to 30,000 a day early next year unless strict precautions are followed. 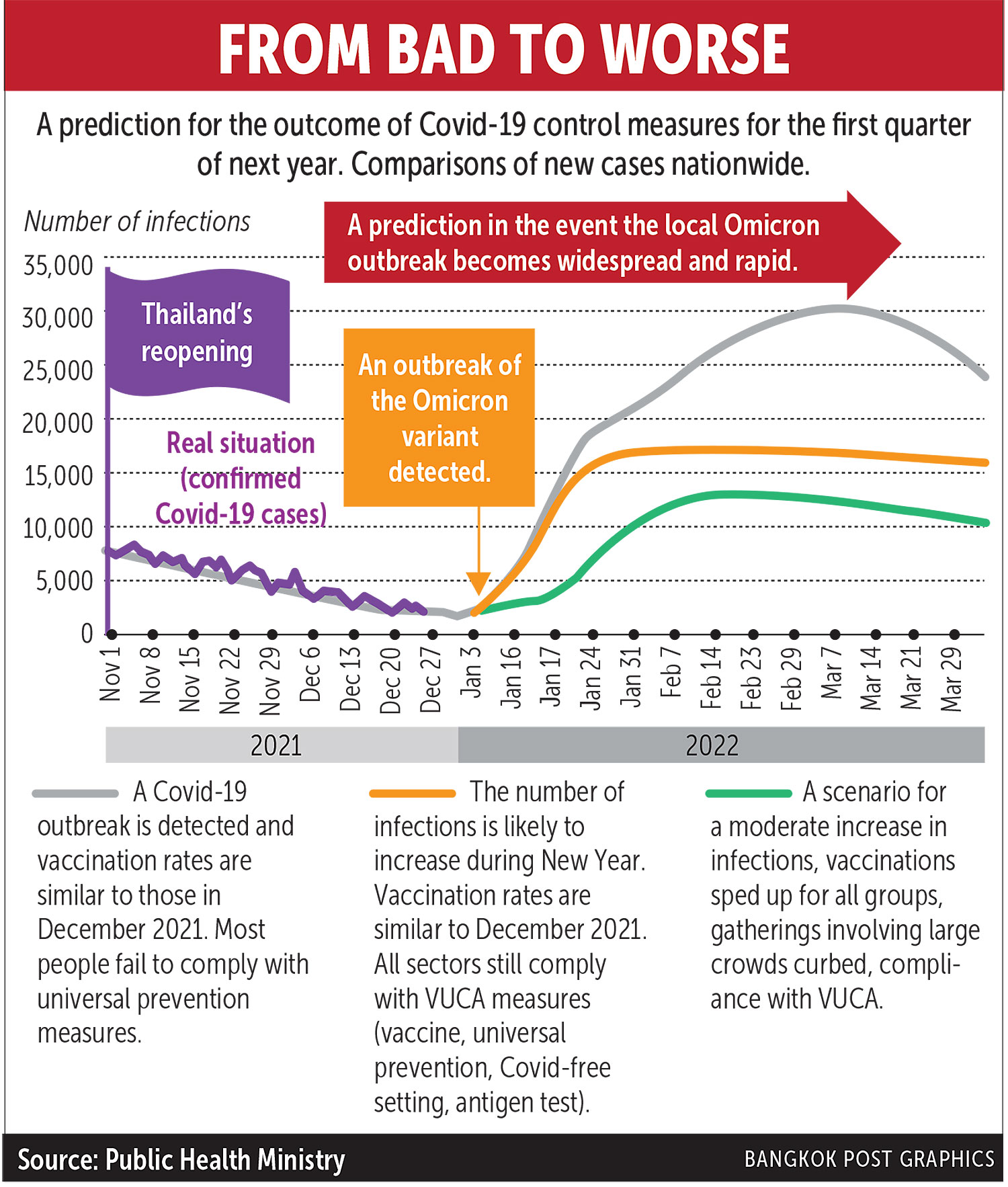 Permanent secretary for health, Kiattiphum Wongrajit said at a media briefing that the ministry decided to raise the nation's Covid-19 alert to Level 3 after seeing new cases of the Omicron variant soar from 104 last Wednesday to 514 on Monday.

In light of the new threat from the Omicron variant, the ministry has come up with three possible scenarios, Dr Kiattiphum said.

In the best-case scenario, the country would see about 10,000 new infections, with fatalities hovering between 60-70 a day as early as late January, Dr Kiattiphum said.

In the worst-case scenario, in which no added precautions against the fast-spreading variant are taken, or if the public refuses to comply with disease control measures, new infections could hit 30,000 daily, with 170-180 deaths per day, Dr Kiattiphum said.

Graphics presented at the briefing showed the daily tally of new Omicron infections peaking in late January or early February in the best and second-best scenarios.

Dr Kiattiphum said that in the best-case scenario, the outbreak would be brought under control in one or two months, while in the second-best scenario, the situation will take a little longer to stabilise.

In the worst outlook, new infections would peak in early March before the numbers decline, Dr Kiattiphum said, before adding it would take three to four months for health authorities to control the situation in this scenario.

According to the permanent secretary, the ministry isn't expecting to see the fatality rate of the new variant to be as high as the Delta variant.

However, he said, the virus is likely to spread faster, before stressing the need for at-risk groups of people to get vaccinated quickly to prevent the worst effects of the virus.

Out of the 514 Omicron cases which were detected in Thailand as of yesterday, about 90% of the patients exhibited mild or no symptoms at all, Dr Kiattiphum added.

Dr Kiattiphum also assured the public that there are enough beds and medicine to deal with a new surge of infections.

Currently, there are about 170,000 vacant hospital beds for patients and about 15 million favipiravir pills, which will last at least two months.

Dr Kiattiphum said the strict observance of disease control measures and the progress of the national vaccination campaign will ultimately determine the success of the fight against the Omicron variant.

Dr Opas Karnkawinpong, di­rector-general of the Department of Disease Control, said the alert was raised to Level 3 in order to allow the government to step up efforts to prevent, detect and control infections.

Air-conditioned restaurants must make sure their staff are fully vaccinated and regularly conduct antigen tests on them, Dr Opas said.

"The ministry is concerned about a likely rise in new cases after New Year as a result of the increased movement of people," he said, noting many people are planning to return to their hometowns to mark the New Year with their families, while others plan to take part in public year-end celebrations.

"A wider spread of the virus is expected after the New Year celebrations as Omicron is far more transmissible," Dr Opas said. He advised offices to continue with the work-from-home approach to help limit the spread of the disease.

The Centre for Covid-19 Situation Administration (CCSA) said the number of Omicron cases jumped fivefold from 104 on Wednesday last week to 514.

The biggest cluster centred around a couple who returned to Kalasin after visiting their relatives in Belgium on Dec 10, she said.

In total, Thailand logged 2,437 new Covid-19 cases and 18 more fatalities in the previous 24 hours, according to the Public Health Ministry.