More than 700 cases, over half imported

Passengers queue for a Covid-19 test provided by Transport Company on Wednesday at Bangkok Bus Terminal (Chatuchak), also known as Mo Chit Bus Terminal. The service is provided free from 9am to 9pm until Jan 3, in an effort to ensure passenger safety during the New Year holiday. (Photo: Chanat Katanyu)

Omicron infections in Thailand are rising with 740 cases confirmed in 33 provinces, 489 of which were imported while the balance were local infections linked to those, the Ministry of Public Health said on Wednesday.

"Omicron is now clearly spreading rapidly but it's not really severe," said Dr Supakit Sirilak, director-general of the Department of Medical Sciences (DMS).

At least 108 countries have detected cases of the highly transmissible strain while all states in the US have recorded cases, he said, pointing to the need for continuous monitoring of the variant's development.

Bangkok has recorded the highest number of Omicron infections due to most tests being conducted in the capital after travellers arrived at Suvarnabhumi airport, Dr Supakit said. 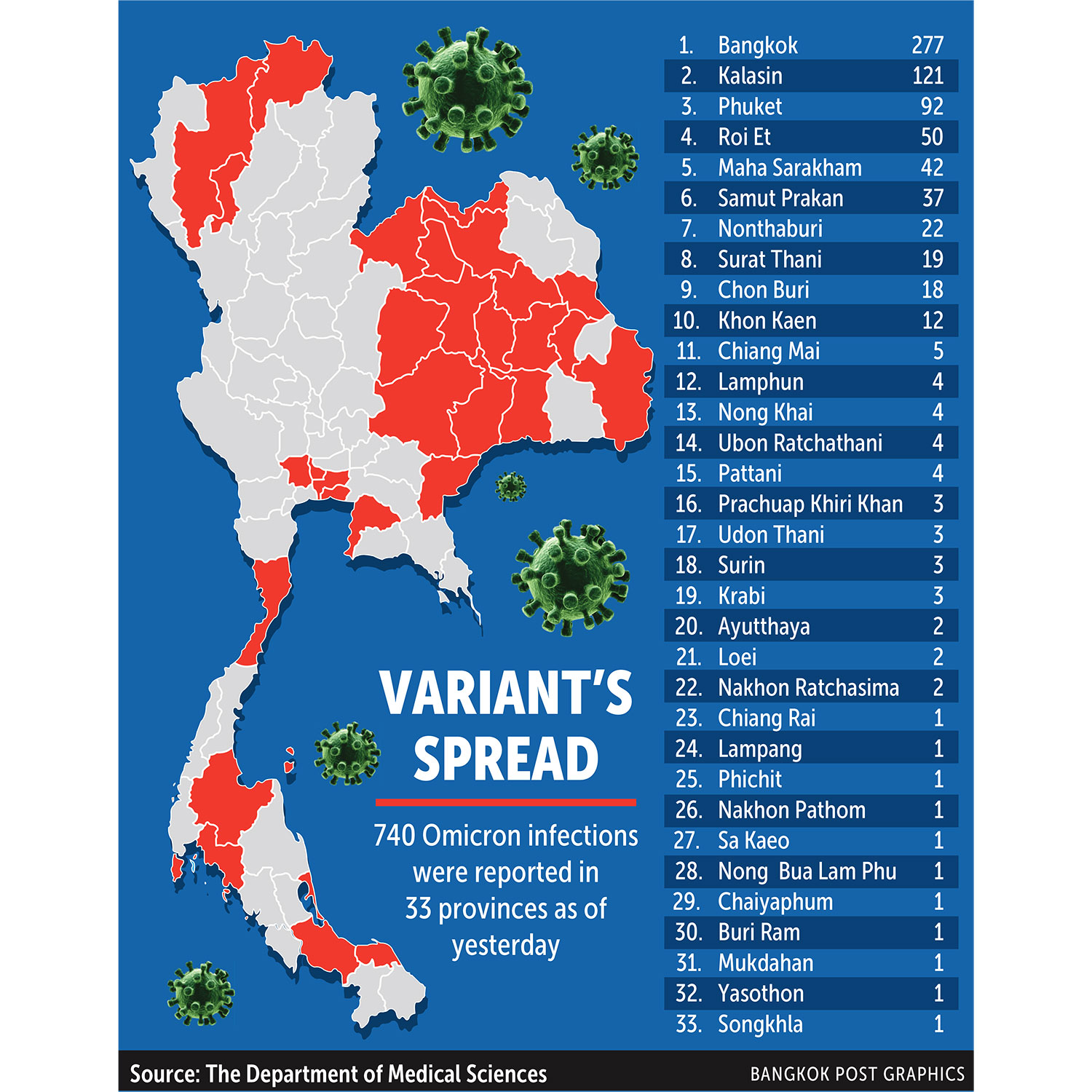 About 200 new cases of Omicron were confirmed on Monday and Tuesday when roughly 5,000 new Covid-19 infections were recorded, which means Omicron cases accounted for 6% of all Covid-19 cases detected in the same period, he said.

"Most if not all local Omicron infections were connected with previous [imported] infections," Dr Supakit said.

In a major cluster of Omicron infections in northeastern Kalasin province, for instance, the number of confirmed cases has risen to over 200, while at least four people in the northern province of Lamphun were also confirmed to have the variant, with their infections linked to the Kalasin cluster, he said.

This cluster was found to have been triggered by a husband and wife who had returned from Belgium. They reportedly dined at a bar and restaurant in Kalasin without realising they had been infected with the Omicron variant.

In response to growing concern over whether cloth face masks are capable of protecting against Omicron, Dr Supakit said all face masks capable of shielding people from previous variants still work.

"Wearing them properly is even more important now," he said.

While focusing mainly on detecting Omicron, the DMS is randomly testing people infected with Covid-19 for other variants as well to ensure efficiency in the country's surveillance of mutations of the coronavirus, Dr Supakit said.

Such random tests are being conducted not only on foreign travellers arriving in the country but also people living in border areas, Covid-19 patients who develop severe symptoms, and clusters of infections with unusual characteristics, he said.

DNA sequencing has been conducted on a number of these samples and the data gained from the genetic examination process is shared with international scientists through the Gisaid global data science initiative, he said.

Gisaid is a global science initiative established in 2008 that provides open access to genomic data of influenza viruses and the novel coronavirus responsible for Covid-19.

The Centre for Covid-19 Situation Administration (CCSA) on Wednesday reiterated the need for state officials to strictly follow requirements for them to work from home for two weeks after returning from the New Year holidays.

The measure is aimed at preventing the spread of Covid-19, said CCSA spokesman Dr Taweesilp Visanuyothin, adding that private companies are also encouraged to adopt this measure for the same reason.

While Bangkok still has the highest number of daily new Covid-19 infections, more northeastern provinces have been included on the list of 10 provinces with the highest rate of new infections, Dr Taweesilp said.

This indicates an intensification of the Covid-19 situation in the Northeast. People travelling to the region are advised to take extra care about protecting themselves from infection, he said.

Prime Minister Prayut Chan-o-cha has urged the public to be extra careful while celebrating the New Year, to always wear a face mask and try to avoid crowded areas.