A Chinese-manufactured VT4 battle tank is deployed in simulated warfare during a demonstration attended by reporters at the Royal Thai Army Calvary Centre in Saraburi on Jan 24, 2018. (Photo: Chanat Katanyu)

Military spending has faced intense scrutiny in recent years, and due to budgetary pressure from the Covid-19 pandemic several weapon purchase programmes have been shelved or scrapped to pool money into addressing the crisis and its economic fallout.

With the government having approved two emergency loan decrees to allow it to borrow 1.5 trillion baht to prop up the economy, the argument that these arms procurement schemes should remain on ice is likely to get even stronger.

However, the armed forces are expected to seek funding for key programmes to maintain their defence capabilities and strategic development while also keep on top of threats to national security.

The navy's controversial submarine programme and the air force's plan to source a new fleet of advanced fighter jets are among the projects to watch as plans for the fiscal 2023 budget, which starts in October, take shape.

The navy is unlikely to seek funding for two Yuan-class S26T submarines in the 2023 fiscal budget due to financial constraints caused by the Covid-19 pandemic, according to a source in the navy.

Navy chief Adm Somprasong Nilsamai is said to have reviewed the situation and decided the submarine spending should be put on hold for another year, the source said.

Instead, the earmarked fund will be spent on improved welfare, the source added.

"It is Adm Somprasong's decision. There has been no instruction from the government. Even though the submarines are necessary strategic weapons, the economic situation doesn't favour the programme. So his policy is to put it on hold for fiscal 2023," said the source. 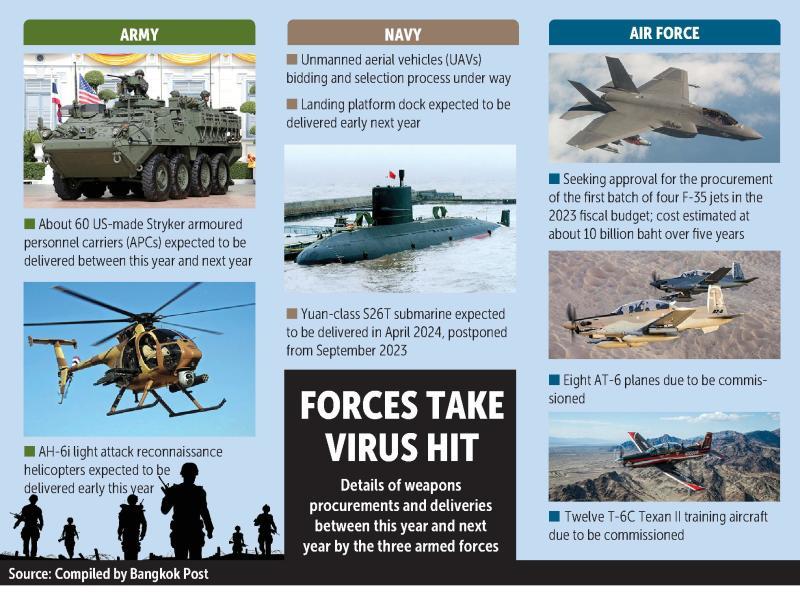 The cabinet agreed in principle with the government's earlier plan to buy three submarines from China on a budget of 36 billion baht and the navy is resigned to ultimately seeing this through, Adm Somprasong said in November.

However, while insisting the submarines are essential to protecting the nation's maritime interests and will serve as a strategic weapon, he said the programme also requires public approval.

The plan courted controversy long before the Covid-19 outbreak and Prime Minister and Defence Minister Prayut Chan-o-cha has already delayed it three times due to fierce public criticism.

There have been whispers in the navy that it may only see one submarine delivered by April 2024, pushed back from the original schedule of late 2023 due to the Covid-19 situation. Some see this as a concern given that many of Thailand's neighbours are equipped with submarines.

Myanmar's second submarine, a Type 35B Ming-class from China, was added to its fleet on Dec 24, following the commissioning of a former Indian Navy Kilo-class submarine, UMS Minye Theinkhathu, formerly the INS Sindhuvir, in 2019.

If the Thai navy's procurement scheme faces another delay of one or two years, it is likely to be forced to reassess its maritime security strategy, according to a source.

It takes about six years for the submarines to be built, so by the time they are commissioned, technologies for maritime safety and security might have changed, the source added.

"The navy may have to review its sub programme if the other two cannot be procured within a year or two," the source said, adding that new technology such as unmanned underwater vehicles -- or underwater drones -- may have been adopted by that time.

Currently the navy has a plan to deploy unmanned aerial vehicles (UAVs) in defending the country's maritime interests in the Gulf of Thailand and the Andaman Sea covering more than 300,000 sq km.

The procurement scheme was approved in the 2022 fiscal year. Five firms have reportedly expressed an interest in bidding for the project -- two from Israel and one each from China, the United States and Turkey.

The new aircraft will replace the ageing fleet of F-5s which have been in service for over three decades. The F-5 jets have been modified and upgraded to extend their use, but spare part shortages are expected in the next five years.

According to ACM Napadej, the air force plans to set up a committee to work on the procurement plan and submit the proposal to the prime minister and cabinet for approval.

The acquisition plan is in line with the air force's 2020 white paper which outlines procurement priorities and possible sources of funding.

Under the initial plan, the air force will purchase a fleet of eight F-35s and three drones which are capable of protecting crewed fighter jets and carrying out reconnaissance and interfering with signals.

The jet purchase programme will be divided into two phases -- four aircraft per phase.

"The F-35 aircraft are no longer 'out of reach' as the price per unit [fly away cost] has been lowered to US$82 million from $142 million. Gripen jets cost $85 million apiece and the costs may come down to $75-76 million after further negotiations," he said, adding the air force is not simply buying "weapons" but "security implements" to enhance the national defence system.

The country's future combat air system (FCAS) will include an assortment of fighter jets and a wide range of drones stationed at Wing 3 in Sa Kaeo's Watthana Nakhon district.

Wing 3, which has commissioned both RTAF U1 and Aerostar drones, will include three Diamond DA-42 planes in its drone fleet and operate as an UAV training centre.

"The programme is expected to reduce maintenance costs by more than 50% and manpower by 40%. It's important to get the programme started because it will take years before the jets are here," said a source.

The air force is scheduled to receive in November a fleet of 12 T-6C Texan II military training aircraft replacing the PC-9s at the Flying Training School in Nakhon Pathom's Kamphaeng Saen district.

However, the delivery of eight Beechcraft AT-6 Wolverine aircraft worth 4.6 billion baht that were originally due to arrive this November will reportedly be delayed until early 2024.

The planes, manufactured by US firm Textron Aviation Defense, will replace the existing fleet of ageing Aero L-39 Albatross aircraft.

Between this year and next, the army is expected to receive the next batch of US-made Stryker armoured infantry carriers as well as AH-6i light attack reconnaissance helicopters to replace its Cobra choppers.

The contracts for these programmes were signed during the tenure of former army chief Gen Apirat Kongsompong.

One of the army's key projects this year is a research and development collaboration with Chinese UAV developer Beihang UAS Technology Co.

This falls under an agreement with the Defence Ministry's Defence Technology Institute (DTI) to jointly manufacture UAVs locally.