An official talks to vendors during a large clean-up operation on Khao San Road on Tuesday after at least six people contracted Covid-19 there over the New Year holidays. (Photo: Pornprom Satrabhaya)

There were 3,878 cases in the general population and 68 among prison inmates.

On Tuesday, 2,508 Covid-19 patients were discharged from hospitals after recovering from the coronavirus.

The number of new infections reported on Wednesday jumped by 808 from the figure released on Tuesday.

Sumanee Wacharasin, assistant spokeswoman of the Centre for Covid-19 Situation Administration (CCSA), said that the coming fortnight would determine the direction of the pandemic in the country.

She warned that new cases could reach "tens of thousands" per day if people lower their guard against the coronavirus.

"The next two weeks will set the course of the spread," Dr Sumanee told a media briefing in the afternoon. "We could see the number of new infections in the tens of thousands if health measures are ignored."

Her warning was in line with the scenarios projected by the Public Health Ministry last month that new infections driven by Omicron could jump to 10,000 or even 30,000 cases a day.

The highly contagious variant has been detected in 55 provinces, up from 54 the previous day, while new infections linked to Omicron increased by 276 to 2,338.

However, it was unclear whether all positive Covid samples were being further tested to determine the variant. A Thai woman currently under treatment in the capital told the Bangkok Post she was informed she would have to pay if she wanted a further test to identify the coronavirus strain, and another Covid-positive patient she knew had been told the same thing.

The assistant spokeswoman said most of the cases in Samut Prakan were detected in air travellers arriving at Suvarnbhumi airport.

She said the CCSA and the Public Health Ministry were concerned about possible infections linked to pubs, bars and restaurants in Chiang Mai, Phayao, Khon Kaen, Udon Thani, Ubon Ratchathani and Bangkok.

Bangkok continued to log the most new deaths — three — while no fatalities were reported in its adjacent provinces.

Other central plain provinces further from the capital recorded five more deaths – two in Nakhon Sawan and one each in Chachoengsao, Phetchaburi and Lop Buri.

The Northeast had one new fatality in Khon Kaen.

The North saw eight new fatalities – four in Chiang Rai, two in Tak and one each in Lampang and Uttaradit.

On Tuesday 34,877 people received Covid-19 treatment at hospitals, including 541 seriously ill patients and 149 dependent on ventilators.

The death toll stood at 21,769 since the beginning of the pandemic. 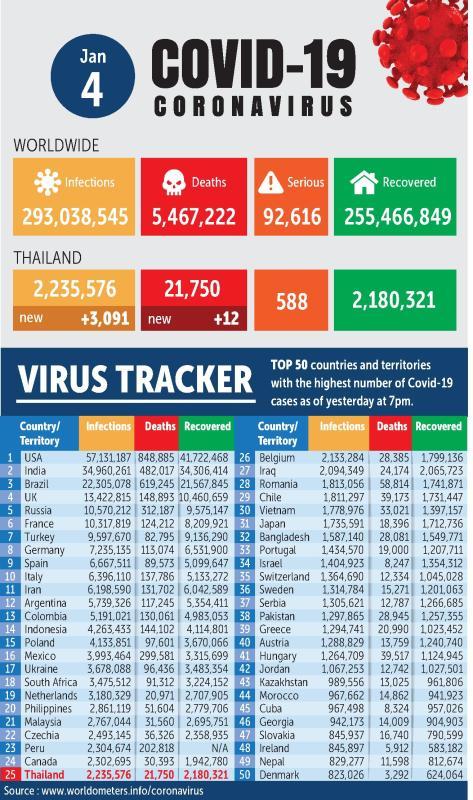