Trekking through dense jungle and mountainous terrain at night to avoid arrest, one couple from Myanmar endured a gruelling journey to Thailand -- grasping for an economic lifeline as jobs dry up in their coup-hit home.

Myo Chit and his wife are among thousands of migrants who have made the crossing in recent months, spurred by the twin crises of a pandemic-hit economy and turmoil triggered by the junta's ousting of Aung San Suu Kyi's civilian government.

Their two-day journey from Myanmar's coastal Tanintharyi Region took them through corn farms, rubber plantations and dense jungle before they reached the porous border, where they crossed into Kanchanaburi province with the help of a smuggler.

There they risked arrest and immediate processing for deportation by police.

The couple then travelled to Samut Sakhon province near Bangkok, where Myanmar migrants have historically found work.

But for undocumented migrants in the country, life under the radar is grim.

Many spend their nights in overcrowded housing, or in the homes of friends and relatives, and their days evading authorities.

"But we could not stay (in our town)... we had to think about the future of our children," 45-year-old Myo Chit told AFP, using a pseudonym for fear of being tracked down by authorities.

He eventually secured the job he was desperate for at a clothing dye factory, earning 300 baht a day.

With a six-year-old child and an infant left in his in-laws' care in Myanmar, Myo Chit said leaving was difficult but had to be done.

"We could not stay there because of high prices -- we had to leave our village," he said. "We came here just to earn money." In this file handout photo from the Royal Thai Army released on Nov 1, 2021, Myanmar migrants sit on the ground after being apprehended by military personnel in Kanchanaburi province. (AFP)

Myanmar workers have long sought jobs in Thailand. Pre-pandemic, an estimated two million were living and working in the kingdom.

With borders closed since March 2020, migrants have no choice but to make the journey illegally.

There is no official data on the size of the influx, but experts say one indicator is the number of migrants who have been caught by authorities.

In the months after Myanmar's Feb 1 coup, the number of arrests tripled, according to government figures.

It peaked in November with more than 6,000 migrants intercepted -- more than a 10-fold increase from the 560 people arrested in January 2020.

According to Geraldine Ansart, the International Organization for Migration's Thailand mission chief, for each person arrested, "it is realistic to assume that... at least one other Myanmar national could cross the border without being apprehended".

Migrant rights activist Roisai Wongsuban said the spike in arrivals is due to Myanmar's post-coup economic crisis, which has seen inflation soar and work opportunities evaporate.

With food prices doubling and fuel costs spiking as the value of the kyat, Myanmar's currency, plummeted against the US dollar, many people became destitute, she said.

"It is hard for ordinary people."

Seasonal workers, who for years had travelled in and out of Thailand, were left in the lurch after Covid-spurred border closures.

"The border has been closed for so long that there is no legal pathways for workers who want to come back to Thailand," Ms Roisai added.

Army spokesman Gen Santipong Thammapiya said it was mainly the country's reopening to tourists in November that was drawing Myanmar workers back -- many of whom staff the kingdom's vital industries, including the service and restaurant sector.

"Workers... wanted to come back," he told AFP. "They also trust the Thai healthcare system, which can provide treatment for Covid." 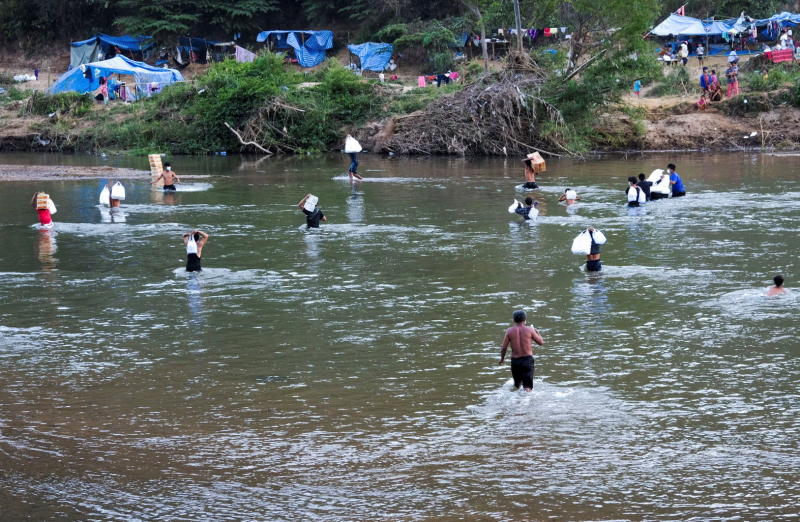 Myanmar refugees, who fled a flare-up in fighting between the Myanmar army and insurgent groups and settled temporarily on the Moei River Bank, receive aid from Thailand on the Thai-Myanmar border, in Mae Sot, Tak province on Tuesday. (Reuters photo)

Demand for Myanmar workers is high in Thailand, where -- given their status -- they have no choice but to accept lower wages.

According to the labour ministry, there is a shortage of up to 200,000 workers.

But according to Gen Santipong, there is no tolerance in Bangkok for illegal migration, and those arrested making the attempt are sent "for legal processing followed by... repatriation", he said.

Prices to make the crossing range from 13,000 to 25,000 baht, and desperation drives thousands to pay.

"Some are arrested, but there are even more people who are not," one smuggler told AFP on condition of anonymity.