Omicron now accounts for a third of Covid cases

There were 13 more Covid-19 fatalities and 7,926 new cases registered during the previous 24 hours, the Public Health Ministry said on Monday morning, with Omicron now accounting for more than a third of new infections.

This compared with 12 coronavirus-related fatalities and 8,511 new cases reported on Sunday morning.

Sumanee Wacharasin, hazard communication director of the Department of Disease Control, said in the afternoon briefing that the 13 new fatalities were between the ages of 30 and 89 years old.

“Ten out of 13 fatalities were unvaccinated or insufficiently vaccinated people,” she said.

Bangkok logged no new deaths while two were reported in the adjacent province of Nakhon Pathom.

The Northeast had one new fatality in Loei.

There were also many clusters related to New Year parties, accounting for 33 cases in Ubon Ratchathani, 25 in Khon Kaen, 22 in Prachuap Khiri Khan, 13 in Nakhon Si Thammarat, eight each in Nan and Ratchaburi, seven in Lop Buri, six each in Phayao and Yasothon, five each in Chon Buri and Amnat Charoen and four in Maha Sarakham.

“The percentage of positive results from antigen tests is rising,” she said.

Of the 412 imported cases, most were in tourism pilot provinces. “Although arrivals are declining, infections among them are going up,” Dr Sumanee said.

On Sunday 58,159 people received Covid-19 treatment at hospitals, including 495 seriously ill patients and 115 dependent on ventilators.

The numbers of seriously ill patients and those needing ventilators tended to rise as daily caseloads were increasing, Dr Sumanee said.

On Sunday, 3,612 Covid-19 patients were discharged from hospitals after recovering from the coronavirus. 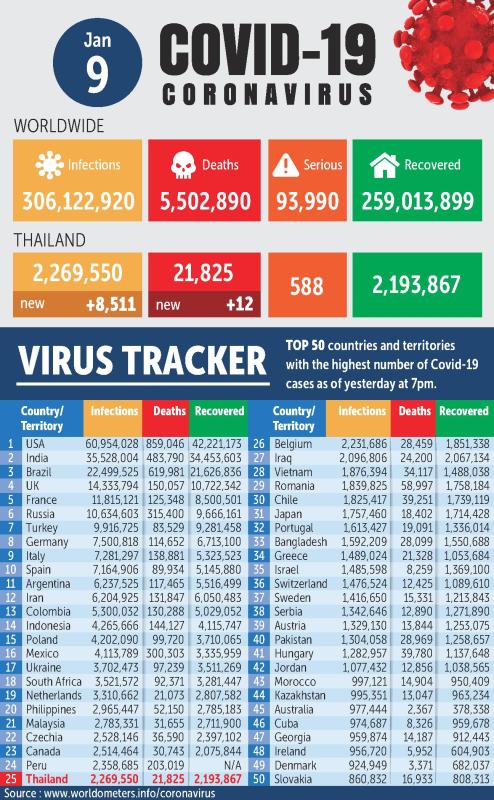