Recent attacks on tenants prompt talk over whether apartments are safe

Montri Yaikrathok, 41, a condo security guard, is handcuffed after being charged with raping a condo tenant and drug abuse. He was captured in Sa Kaeo and brought back to Bangkok. (Police photo)

Two recent attacks on tenants, one of them fatal, in condominiums have set off alarm bells about safety in these buildings and the kind of people employed to protect them.

In the early hours of Dec 26, a 23-year-old part-time warehouse worker was stabbed in a condo in Bang Phli district of Samut Prakan.

A male tenant, identified as Natthachai Art-samart, 31, allegedly admitted to police he attacked the young woman with a knife as he tried to force his way into her room.

She suffered a deep cut to her leg which bled heavily. She struggled in vain to get help and died due to blood loss outside the condo's lift. 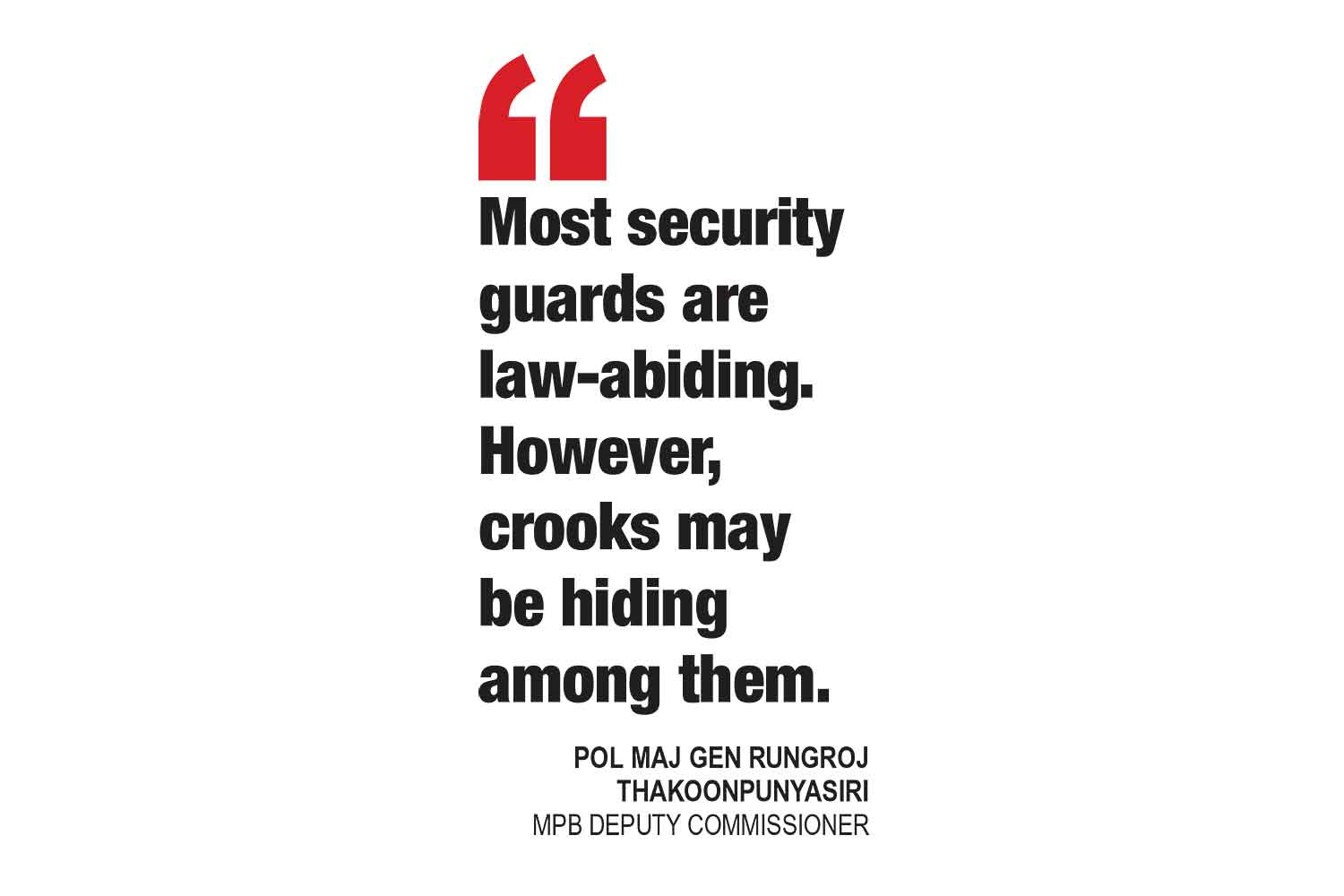 The killer said he intended to rape and steal from her, according to police.

On Jan 4, Montri Yaikrathok, 41, a head security guard, raped a woman inside her room in a condo in Phetkasem Soi 47 in Bang Kae district of Bangkok.

Checks confirmed he had been convicted of raping a minor in his home province of Sa Kaeo in 2013 and was released from prison four years ago before landing a job as head of security at the condo.

After the Jan 4 rape, he fled and was caught in Sa Kaeo two days later. He allegedly admitted to having sexually assaulted the woman while under the influence of drugs. He has since been charged with rape and drug abuse.

The two attacks, which were only days apart, have raised concerns about condo security protection and the recruitment of guards, especially since one of the attackers was one.

Pol Maj Gen Rungroj Thakoonpunyasiri, deputy commissioner of the Metropolitan Police Bureau (MPB), said changes to how security guards are recruited and how they go about their work were in order.

He will propose to the MPB commissioner that all security guards be trained by police in basic security protection.

Background checks to see if guards have criminal records are also necessary. "We need to see these records and interview them to know who they are and what they are capable of," he said.

"Most security guards are law-abiding. However, crooks may be hiding among them," Pol Maj Gen Rungroj said, adding security-guard training should be conducted by police in each province.

In the event of criminal incidents, the deputy commissioner insisted security guards have no authority to prevent police from entering a condo to investigate.

No guard or condo juristic person can obstruct a police investigation or they could be prosecuted.

The deputy commissioner was referring to the Phetkasem condo attack in which the guards were reported to have tried to keep the police from entering the building because the condo's juristic person had not given permission.

"We didn't go in there for the fun of it. They had no business keeping us out," he said.

Piyajet Meedech, a former army officer and director of security at the Sam Security Guards Company, said the Security Guard Business Act of 2015 bars anyone jailed for rape from ever obtaining a licence to work as a guard.

The security chief in the Phetkasem case should never have been employed in the first place. He may have bribed someone to secure the job or was recruited before the law came into force when applicant background checks were lax.

Maj Piyajet cited regulations that prohibit security guards from entering residential zones of a condo unless they are permitted by the juristic person.

When a guard enters such a zone, they should not do so alone but in the company of either a fellow guard or with the juristic person. In the Phetkasem case, the condo's juristic person might have been too trusting of the security chief.

Maj Piyajet said the guards themselves may not have been well-versed with the rules as they only received basic training before being employed.

Kampanat La-ong, 32, a member of the administrative committee of a condo in the Sutthisan area of Bangkok, said his committee makes a point of checking the backgrounds of people security firms send to the condo.

He said condo juristic persons should hire only reputable security firms and ask local police to check a guard's background.

The two recent attacks have spurred several condominiums and apartments into ramping up internal security protection.

A condo in the Thon Buri area has since obtained details of a firm's background check on security guards employed there.

The guards are not given key cards to access the residential floors of the condo which is equipped with closed-circuit television cameras in public areas.

A juristic person of the condo said tenants are asked to look out for any suspicious characters on the premises. The condo now bans anyone without a key card from slipping into the building when a key card holder opens the door.

Female tenants living alone are strongly advised not to open their doors to strangers and immediately alert the office if they have safety fears.

Pimpa Pakseelert, 49, said she has an apartment in Pattaya where she stays with her teenage daughter. She said the condo should advise tenants on security procedures in case of an emergency.

"They should tell us clearly how we can report incidents and who to report them to," she said.

"The two recent attacks were a cause for deep concern. Condos should be a place of safety because they're gated and guarded.

"But the security guards were the culprits themselves or at fault. I feel really bad about this," she said, adding police should conduct regular security patrols around condos, particularly at night.

A 44-year-old condo tenant in Rat Burana district, who asked not to be named, said the attacks left her feeling very scared and expose how easily safety in condos can be compromised, as the incidents had come from within.

She said safety was her main concern since she lives alone and that she does not fully trust the guards working there.

At her condo, she said security is everywhere -- in the lobby and on the residential floors -- but even with an additional chain lock on her door, she still feels unsafe.

"One time a maid mistakenly entered my room. She pushed the door so hard she broke the chain lock," she said.

Her room is also close to the fire exit where security guards regularly congregate. "I have often seen them smoking there," she said.

She also has doubts about the condo's screening of security guards as well as other on-site workers like mechanics.

Yanin Prommolmard, 28, an educational consultant from Chiang Mai who owns a condo in Ratchathewi, said condos are a home away from home for many originally from upcountry. Everyone deserves to live in a safe environment which security guards and juristic persons should be responsible for creating.

"When the recent attacks happened, I felt like I cannot rely on anyone for safety," she said, adding the incidents had taken a toll on her psychologically.

As more people are working from home because of Covid-19, safety at condos must be prioritised. Working like this can be stressful. To have to also worry about safety is a double whammy, she said.