The tigers were killing their cattle, police told

KANCHANABURI: Four men wanted for killing two Bengal tigers found skinned, their meat cooking on a grill, in a jungle camp near the Myanmar border surrendered to police on Thursday.

They said the tigers had preyed regularly on their cattle, so they used a dead cow the big cats had killed as bait and shot them with borrowed guns, according to police.

Earlier, national park officials had told reporters there were five suspects in the killing of the two tigers. Police said later there were four suspects, not five.

The four were identified as Kukue Yindee, 37, holder of the  pink ID card issued to hilltribe people;  Jorhaeng Phanarak, 38, also holder of a pink ID card; Supachai Charoensap, 34, and his brother Ratchanon Charoensap, 30. All were from tambon Pilok in Thong Pha Phum district. (continues below) 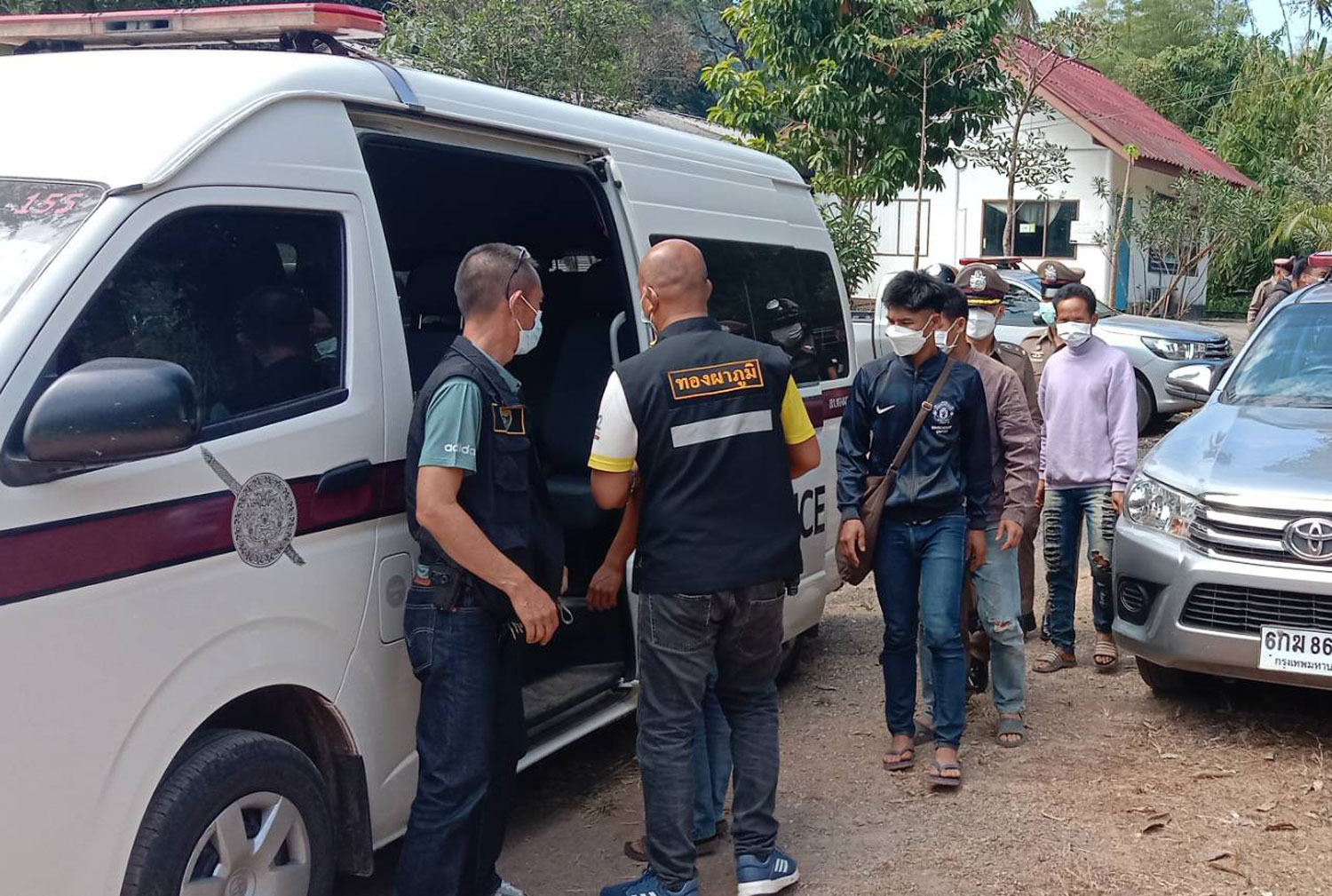 Four men wanted for killing two Bengal tigers are escorted into a police van sent to pick them up at a road checkpoint in Thong Pha Phum district, Kanchanaburi, on Thursday. (Photo supplied: Piyarat Chongcharoen)

During questioning, the four men told police that they raised cattle for a living. During the past two months, tigers had killed and eaten about 20 cows belonging to them and other local farmers.

They felt they had no choice but to put an end to it. They used the carcass of a cow killed by the tigers as bait, and lay in wait for them. They only wanted to get rid of the tigers killing their cattle, they said. They had no other motive.

They told the police that they had borrowed shotguns issued to some defence volunteers.

Charoen Chaichon, head of the Thong Pha Phum National Park, said on Thursday that park officials had presented evidence gathered at a campsite near the border to investigators at Pilok police station.

National park officials have sought permission from police investigators to keep the carcasses of the two Bengal tigers, four folding knives, three flashlights, one solar cell panel with its accessories, five hammocks, ropes and other items. (continues below) 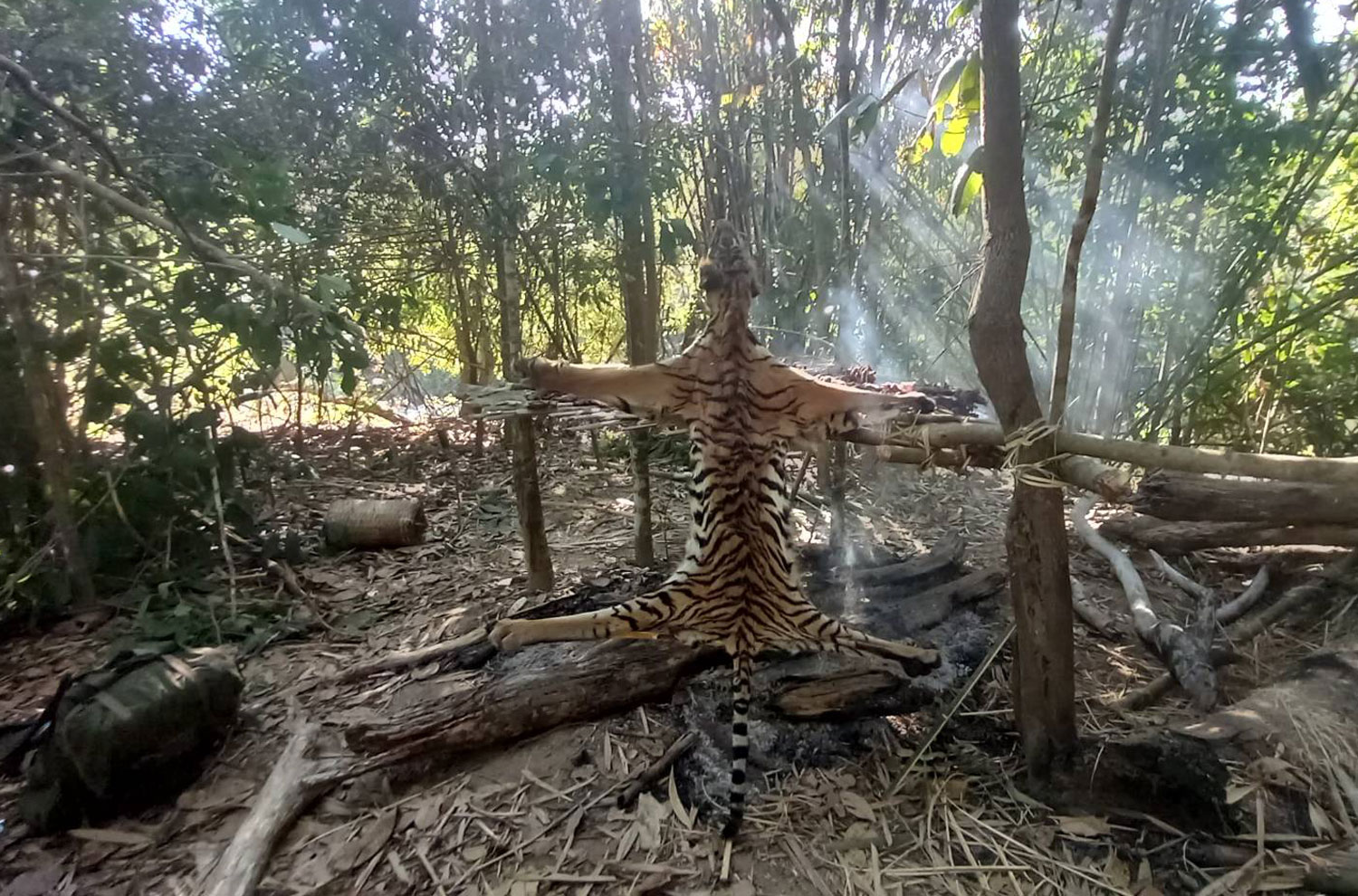 The pelt of a Bengal tiger being dried at the hunting camp near the Myanmar border in Thong Pha Phum distgrict of Kanchanaburi. (Photo supplied/ Piyarat Chongcharoen)

The national park chief said park officials Wanchai Soonkham and Uthen Buaroy had been assigned to file charges with Pilok police against the suspects for violations of the forest reserve law, the National Park Act and the Wildlife Conservation and Protection Act.

A source said the suspects were local residents and planned to surrender to police later on Thursday.

Niphon Chamnongsirisak, director of the Protected Area Regional Office 3 (Ban Pong), on Wednesday revealed the hunting and killing of the wild animals at the Thong Pha Phum National Park headquarters.

National park rangers seized the pelts of two Bengal tigers and other items at a campsite near the Myanmar border on Jan 9.

The hunters fled the campsite, leaving meat from the tigers cooking on a grill. 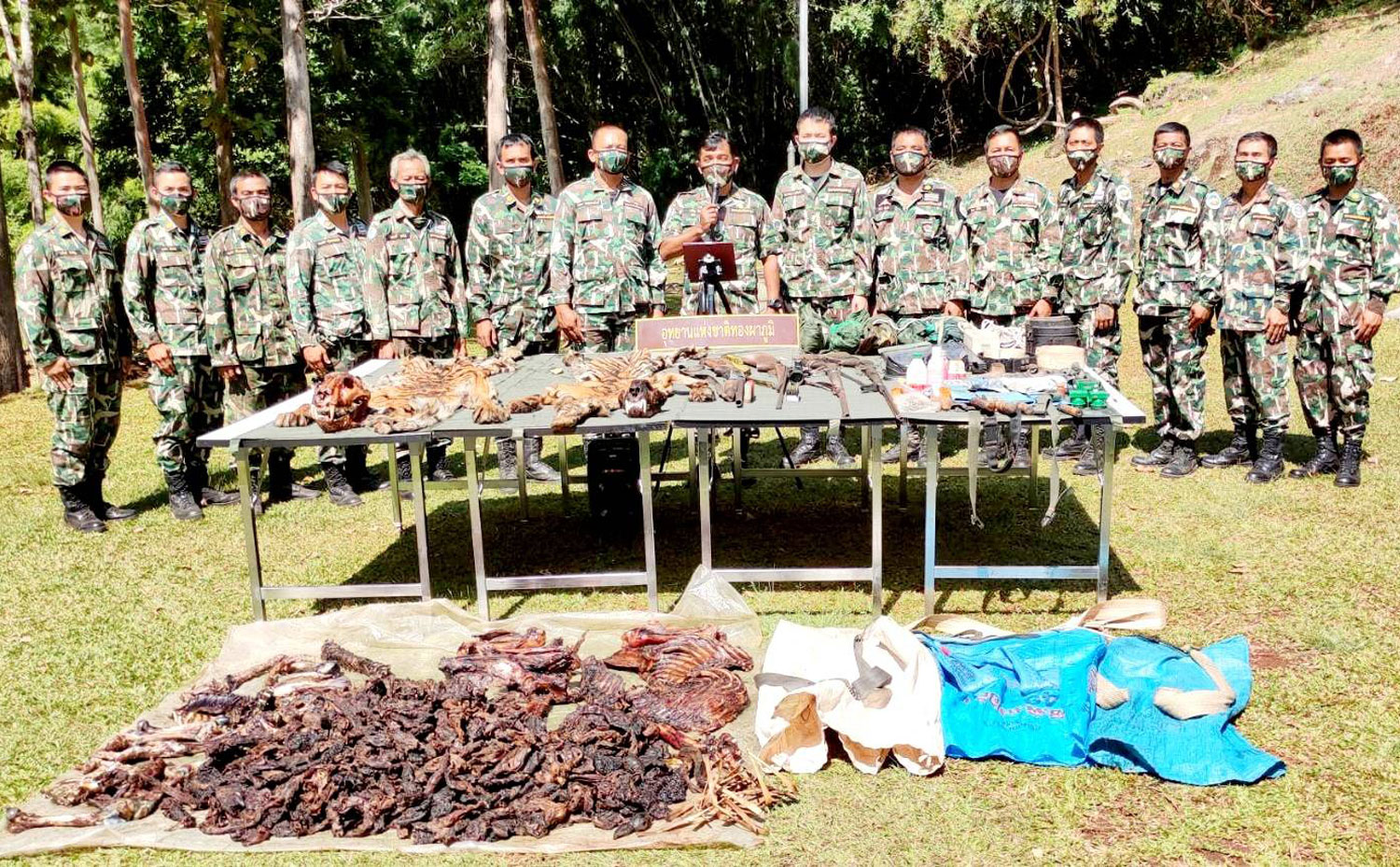