The pelts of two Bengal tigers and other items left behind by five suspects near the Pilok stream along the Thai-Myanmar border in Kanchanaburi are displayed during a briefing on Friday. (Photo: Piyarat Chongcharoen)

KANCHANABURI: Police have pressed 10 charges against all suspects involved in the killing of two Bengal tigers found skinned with their meat cooking on a grill in a jungle near the Myanmar border in Thong Pha Phum district.

The fifth and final suspect surrendered to authorities on Thursday night. Sho-ae, 66, holder of a pink ID card issued for hilltribe people, reported to officers at Thong Pha Phum police station but denied any involvement in the killings.

Four other men wanted for killing the two animals surrendered to police earlier. They said the tigers had preyed regularly on their cattle and this drove them to use a dead cow as bait and shoot them.

The four were identified as Kukue Yindee, 37, and Jorhaeng Phanarak, 38, both holders of pink hilltribe ID cards; Supachai Charoensap, 34, and his brother Ratchanon Charoensap, 30. All were from tambon Pilok in Thong Pha Phum district. During questioning, the four did not implicate anyone else in the killing of the tigers, said a source.

Jorhaeng and Supachai, who had admitted to the shootings in Jan 8, were taken on Friday for a crime re-enactment. It was followed by a briefing held by deputy national police chief Pol Gen Roy Inkhapairoj, senior officers, national park officials and provincial and local officials. 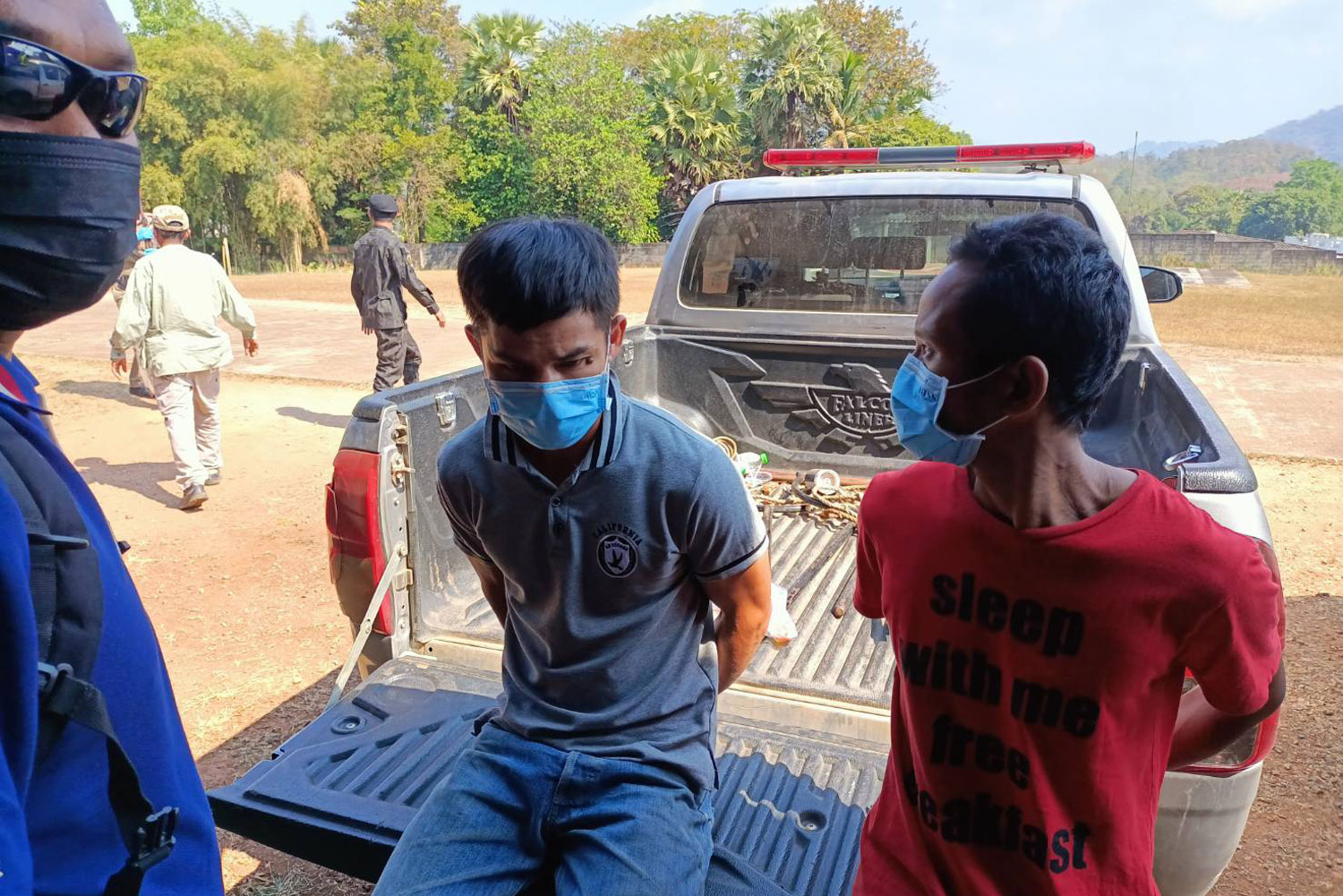 Two of the men who admitted to having shot dead two Bengal tigers are taken for a crime re-enactment on Friday in Kanchanaburi. (Photo supplied: Piyarat Chongcharoen)

Pol Gen Roy said authorities had taken drastic measures against the wildlife trade and killing of wild animals. He called on hunters to stop preying on wild animals or face harsh punishement.

The hunting and killing of the wild animals was first reported  on Wednesday by Niphon Chamnongsirisak, director of the Protected Area Regional Office 3 (Ban Pong), at the Thong Pha Phum National Park headquarters.

Park rangers seized the pelts of two Bengal tigers and other items at a campsite near the Myanmar border on Jan 9.

The hunters had fled the campsite, leaving meat from the tigers cooking on a grill.

Prasart Daengthern, head of Moo 4 village in tambon Pilok, said on Friday that cattle raising was how local residents made their living. All those who were caught were local residents and they were not wildlife hunters, he said.

He said he believed they had been angered by the death of their cattle and this drove them to kill the tigers. They had not shot the animals to sell their carcasses, said Mr Prasart.

Mr Niphon said on Friday that veterinarian Kanokwan Taruyanon of the Protected Area Regional Office 3 had performed an autopsy on the carcasses of the two tigers. The male had sustained three gunshot wounds – two to the skull and one in a canine tooth. The tigress was shot four times at close range.

It was the first time that Bengal tigers had been found in the compound of the Thong Pha Phum national park, Mr Niphon said. This might indicate that the tiger population has increased and the habitat expanded to the national park area.

He said park authorities had not received any complaints from local residents that cattle were being killed by tigers as claimed by the suspects.

He suspected the tigers might have migrated recently to the park. Local residents might have spotted traces of the animals and made a plan to kill them, he said.

However, he added that he did not think the killing of the Bengal tigers had anything to do with transnational wildlife trade. A suspect re-enacts the killing of Bengal tigers at an event staged by police. (Photo: Piyarat Chongcharoen)