People wait for Covid-19 vaccination at Bang Sue Grand Station in Bangkok on Sunday. Officials encourage people, especially the elderly, to hurry and get vaccinated to protect themselves from Covid-19. (Photo: Apichit Jinakul)

The second Omicron-related death has been recorded in Thailand, an 84-year-old unvaccinated woman with terminal lung cancer in Udon Thani province.

Apisamai Srirangson, a spokeswoman for the Centre for Covid-19 Situation Administration, said on Monday that the woman died in Kut Chap district of Udon Thani on Saturday.

Her son first tested positive for Covid-19. She showed no symptoms, but her family had her  tested for the disease on Jan 9, and it turned positive right away.

The old woman and her family stood firm on having treatment while in home isolation, Dr Apisamai said.

Dr Apisamai said on Jan 13-14 the woman had no appetite and her blood oxygen level dropped, but she still had no fever.

On Jan 15 she was fatigued, had difficulty breathing and her blood oxygen fell below 76%.

Health officials recommended her admission to hospital but relatives rejected that and also denied the use of a ventilator. The woman died on Saturday, Dr Apisamai said.

The first Omicron-related fatality was also an old woman, an 86-year-old in tambon Klong Hae of Songkhla's Hat Yai district, the spokeswoman said. She was bed-ridden and suffered Alzheimer's disease, and died last Wednesday.

She developed a fever and excessive phlegm on Jan 6. Her daughter was infected with Covid-19 and she was also in close contact with her grandson, who had returned from Phuket.

Her antigen test returned positive and relatives took her to Hat Yai Hospital on Jan 7. The hospital confirmed her infection.

Her condition deteriorated quickly with a high fever, lung inflammation with fluid in the lungs, coughing and breathing difficulties.

Dr Apisamai said both fatalities were elderly and had chronic diseases. The woman in Songkhla had previously received two doses of Covid-19 vaccine, but the second dose was more than four months ago.

The most recent, second Omicron fatality had not been vaccinated.

Both were bed-ridden and had been in close contact with at-risk relatives, she said.

Dr Apisamai recommended that people in households where old people are present observe distancing and wear face masks, and keep personal belongings separate and use separate toilets if at all possible, to protect them from infection. 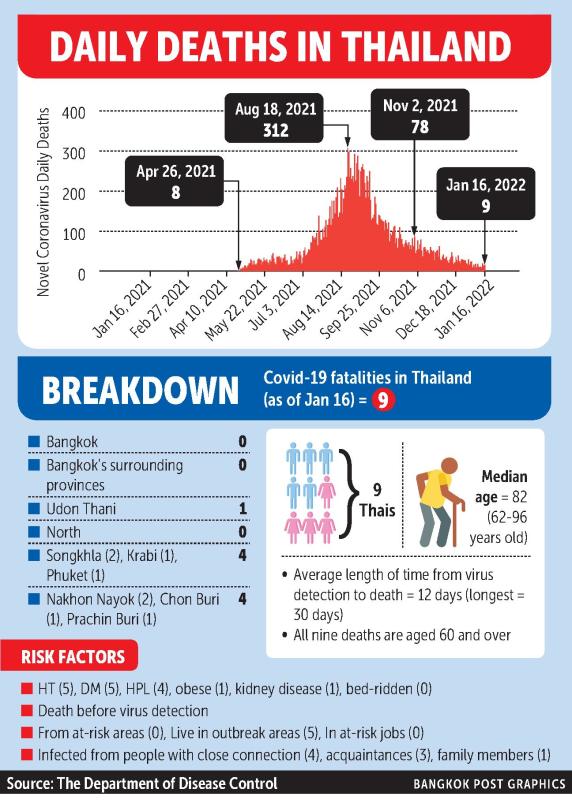