Gen Prayut told the United Nations Secretary-General's Special Envoy for Myanmar, Noeleen Heyzer, that they would be able to return to their country on a voluntary basis, according to government spokesman Thanakorn Wangboonkongchana.

All Thai agencies will provide them with basic humanitarian assistance, he added.

Thousands of Myanmar nationals are being sheltered in safe zones along the border, mainly along the Moei River in Tak province. Violent clashes between the Myanmar army and the Karen National Union erupted in Karen state last month.

Ms Heyzer is seeking support from the Association of Southeast Asian Nations (Asean) to find a solution to Myanmar, following the Feb 1 coup that ousted civilian leader Aung San Suu Kyi from power. 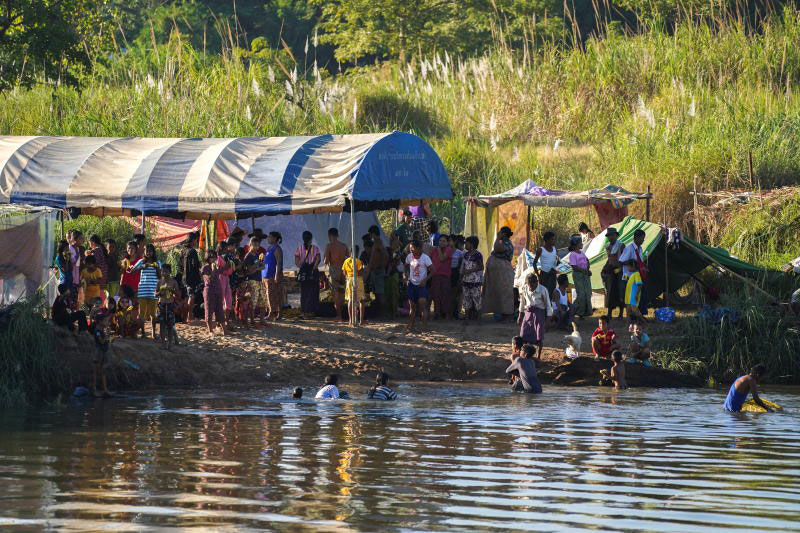 Refugees, who have fled a flare-up in fighting between the Myanmar army and insurgent groups and settled temporarily on the Moei River bank, gather after receiving aid from Thailand on the Thai-Myanmar border in Mae Sot district of Tak on Jan 6, 2022. (Reuters photo)

The UN special envoy expressed concern about the situation in Myanmar, while Gen Prayut said building trust with the Myanmar leaders would be an important step to pave the way for attempts to end the crisis, according to the spokesman.

Ms Heyzer of Singapore was appointed the special envoy for Myanmar in October. She was the first woman to lead the UN Economic and Social Commission for Asia and the Pacific for seven years ending in 2014.