Thailand and Saudi Arabia have agreed to fully restore diplomatic relations, opening a new chapter in their relations and creating opportunities for bilateral cooperation and development between the two kingdoms.

Upon his return from a one-day official visit to Riyadh, Prime Minister Prayut Chan-o-cha hailed the visit as a tremendous success, marking an end to three decades of strained relations and a beginning of cooperation for mutual benefit.

"Both countries have agreed to fully restore diplomatic ties including the appointment of ambassadors and will consider setting up mechanisms to strengthen bilateral cooperation,'' he said.

Saudi Arabia downgraded diplomatic ties with Thailand and adopted a number of measures after the murder of Saudi diplomats and the disappearance of a Saudi businessman in Bangkok following the theft of Saudi state gems in 1989.

These included replacing the head of its diplomatic mission with a charge d'affaires, prohibiting Saudi Arabian nationals from travelling to Thailand, and stopping Thai workers from being employed in the Middle East nation.

There have been a number of attempts to repair relations between the countries over the years. Gen Prayut's visit at the invitation of His Royal Highness Prince Mohammad bin Salman bin Abdulaziz, crown prince, this week has been heralded as a historic breakthrough.

"I'm overwhelmed with the vast opportunities that both nations are likely to gain from normalising relations," he said on his Facebook page. 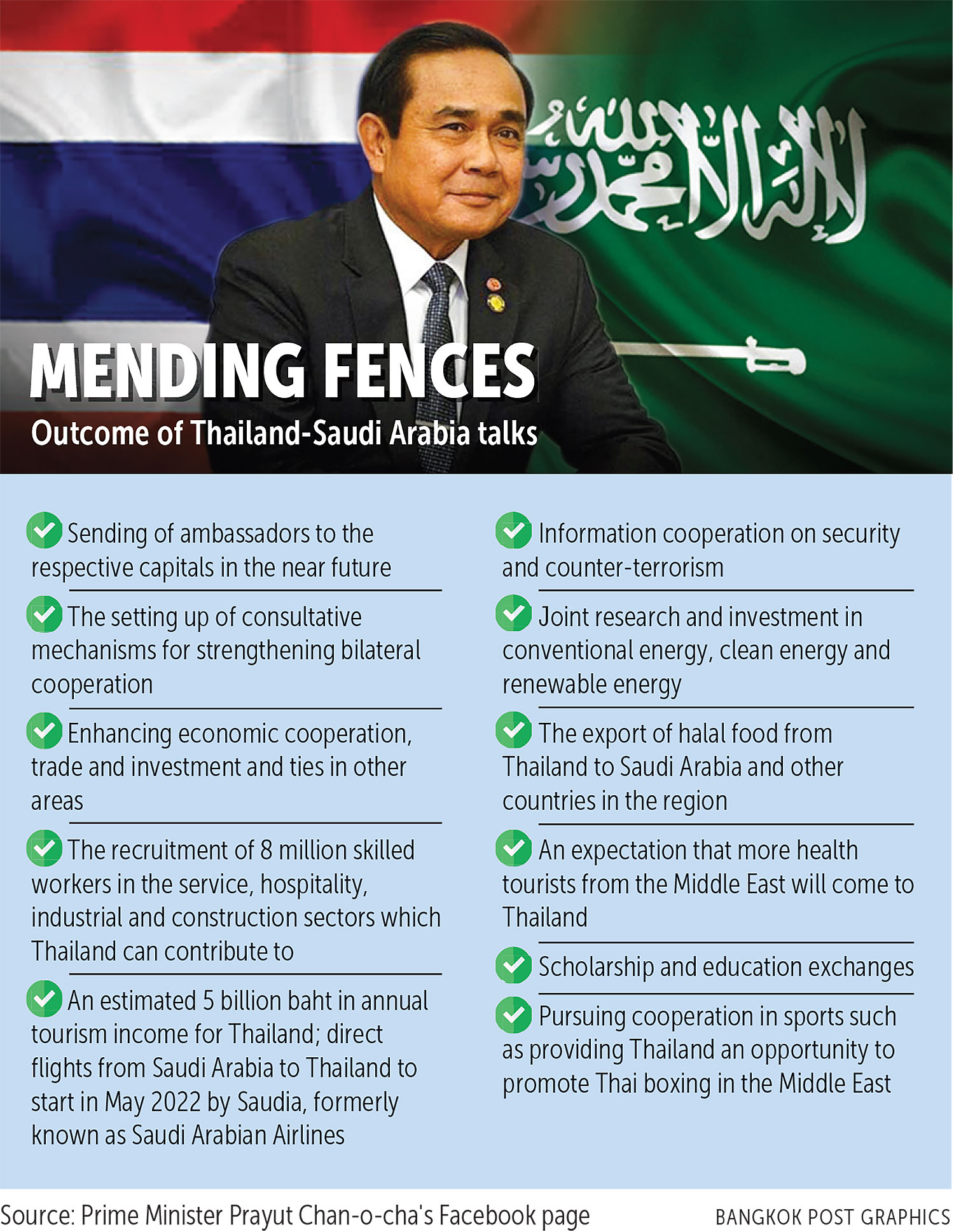 Tourism will promote more contact between the two nations and is expected to generate at least 5 billion baht in income for Thailand, he added.

On energy, both nations are expected to pursue joint research and investment in conventional, clean and renewable energy in line with strategic goals.

"The full restoration of diplomatic ties will also create job opportunities for the country's skilled and semi-skilled workers as Saudi Arabia proceeds with infrastructure schemes,'' he added.

In 1987, Thailand sent about 300,000 workers to Saudi Arabia who generated more than 9 billion baht for the country. Those labour cooperation arrangements will be brought back with Thai workers expected to contribute to Saudi Vision 2030, a strategic framework for economic and social development, Gen Prayut said.

On security, Saudi Arabia, a core member of the Organisation of Islamic Cooperation (OIC), can promote the Thai government's efforts to restore peace to the deep South.

The two countries can also intensify bilateral cooperation in religious education and exchanges of knowledge in other fields.

While Thai investors and SMEs can pursue business opportunities and partnerships in the Middle East, Saudi Arabia can seek to invest in Thailand's special economic schemes such as the Eastern Economic Corridor (EEC) via its Saudi Wealth Fund.

Gen Prayut said Thailand is ready to elevate bilateral relations to new heights and expand this to multilateral cooperation.

Mr Suchart said he asked the Thai labour office in Riyadh to coordinate with Saudi authorities on forms of labour cooperation.

As of December, there were 1,345 Thais working in Saudi Arabia.