In this file photo taken on Nov 10, 2021, protesters burn a picture of Myanmar's military chief Min Aung Hlaing during a demonstration against the military coup in Yangon. (Photo: AFP)

One night last April, a neighbour phoned to tell him his son, Wai Soe Hlaing, a young father who ran a phone shop in Yangon, had been detained in connection with protests against the Feb 1 military coup.

They traced the 31-year-old to a local police station, according to Win Hlaing and The Assistance Association for Political Prisoners (AAPP), a non-profit that has been documenting arrests and killings.

Then the trail went cold. He had vanished.

Reuters called the police station but was unable to determine the whereabouts of Wai Soe Hlaing, or the missing relatives of two other people who were interviewed for this article.

A spokesman for the junta did not respond to emailed requests for comment and did not answer phone calls seeking comment.

Wai Soe Hlaing is among many people who activists and families say have disappeared since Myanmar was plunged into turmoil after the military overthrew the elected government led by Aung San Suu Kyi.

The AAPP estimates more than 8,000 people are detained in prisons and interrogation centres, including Suu Kyi and most of her cabinet, while about 1,500 have been killed. Reuters was unable to independently verify the figures from the AAPP.

They say hundreds have died after being detained. The junta has said the figures are exaggerated and that the AAPP spreads false information. The junta has not disclosed the number of people in detention.

Search for loved ones

The military does not notify relatives when a person is arrested and prison officials often do not do so when they arrive in jail, so families laboriously search for their relatives by calling and visiting police stations and prisons or relying on accounts from local media or human rights groups.

Sometimes they send food parcels and take it as a sign their relative is being held there if the package is accepted, a Human Rights Watch report said.

In many cases, AAPP co-founder Bo Kyi said, the organisation has been able to determine someone has been detained but not where. Tae-Ung Baik, chair of the United Nations' working group on enforced disappearances told Reuters the group had received reports from families in Myanmar of enforced disappearances since last February and was "seriously alarmed" by the situation.

In a border town, 43-year-old activist Aung Nay Myo, who fled there from the northwestern Sagaing region, said junta troops took his parents and siblings from their home in mid-December and he does not know where they were.

He believes they were detained because of his work as a satirical writer. Among them is his 74-year-old father, left disabled by a stroke.

"There is nothing I can do but worry every moment," Aung Nay Myo said.

Two police stations in the town of Monywa, their hometown in Sagaing region, did not answer phone calls seeking comment.

In some areas, resistance to the junta has spiralled into conflict, with fighting displacing tens of thousands of people across the country, according to the United Nations. Thousands have fled across borders to Thailand and India. 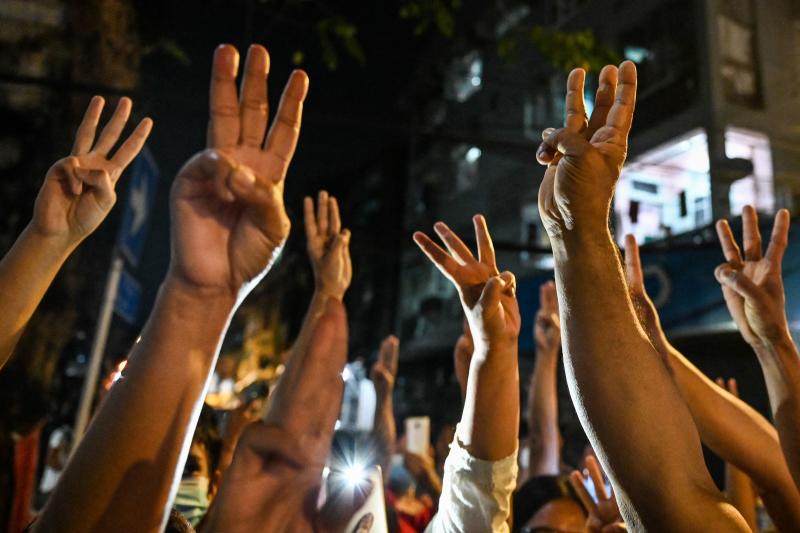 In this file photo taken on Feb 3, 2021, people give a three-finger salute after calls for protest went out on social media in Yangon, as Myanmar's ousted leader Aung San Suu Kyi was formally charged two days after she was detained in a military coup. (Photo: AFP)

In the northeastern Kayah state, where fighting has been fierce, Banyar Khun Naung, director of the non-profit Karenni Human Rights Group, said at least 50 people were missing.

The group is trying to help families search, asking recently released prisoners any names they remembered.

"The families of missing people are in great pain, especially mentally, as it is exhausting not to know where their loved ones are," he said.

Myint Aung, in his mid-50s and now living in a camp for internally displaced people in Kayah, said his 17-year-old son Pascalal disappeared in September.

The teenager told his father he was going to travel to their home in the state capital Loikaw to check on the situation, but never came back, Myint Aung said.

Instead, he was detained by security forces, Myint Aung told Reuters by phone, saying that local villagers told him. When he visited the station to deliver food, he found soldiers guarding the area and ran away.

Since then, Myint Aung has heard nothing of his son, but the rights group told him he was no longer at the police station, citing conversations with several people recently freed. Reuters was unable to independently verify this information.

Banyar Khun Naung, the Karenni rights group director, said the teenager was one of two young men pictured making the "Hunger Games" salute adopted by protesters as they were detained kneeling by the side of a road, lashed together with rope by a soldier, in an image widely circulated on social media. His sister confirmed by phone it was Pascalal.

The photo appeared in a viral post from an account that appeared to belong to a high-ranking soldier, with the caption, "While we let them do what they want before we put bullets through their heads". The account was subsequently deleted and Reuters was not able to reach its owner for comment.

"He's an underage civilian boy and he didn't do anything wrong," his father Myint Aung said.

Police in Loikaw did not answer phone calls from Reuters seeking comment.

In Yangon, the family of Wai Soe Hlaing tell his four-year-old daughter her father is working somewhere far away. Sometimes, Win Hlaing said, she murmurs about him: "My papa has been gone too long.