Consumer protection police and Food and Drug Administration officials announce the seizure of sausage products from a factory in Chon Buri after nine children in five provinces were taken to hospital after eating sausages from the factory. (Photo supplied)

Consumer protection police raided a sausage factory in Chon Buri and seized products worth about 700,000 baht for examination after children in five provinces developed a blood disorder after eating food produced there.

Consumer Protection Police Division (CPPD) commander Pol Maj Gen Anan Nanasombat and representatives from the Food and Drug Administration on Thursday announced the seizure of the products from the factory.

They were diagnosed with methemoglobinemia (a blood disorder caused by elevated levels of a form of haemoglobin).

CPPD investigators first ascertained that the sausages were all made at the same factory in Chon Buri.

The police, FDA officials and health officials in Chon Buri jointly inspected the factory and spoke to a woman who said she was the owner. Her name was withheld.

She admitted to having produced sausage products without the proper permits for about five years, Pol Col Nethi said.

Labels of some products there matched those on the food eaten by the students who fell ill. The products had no FDA approval. The factory did not pass good manufacturing practice (GMP) standards, Pol Col Nethi said. (continues below) 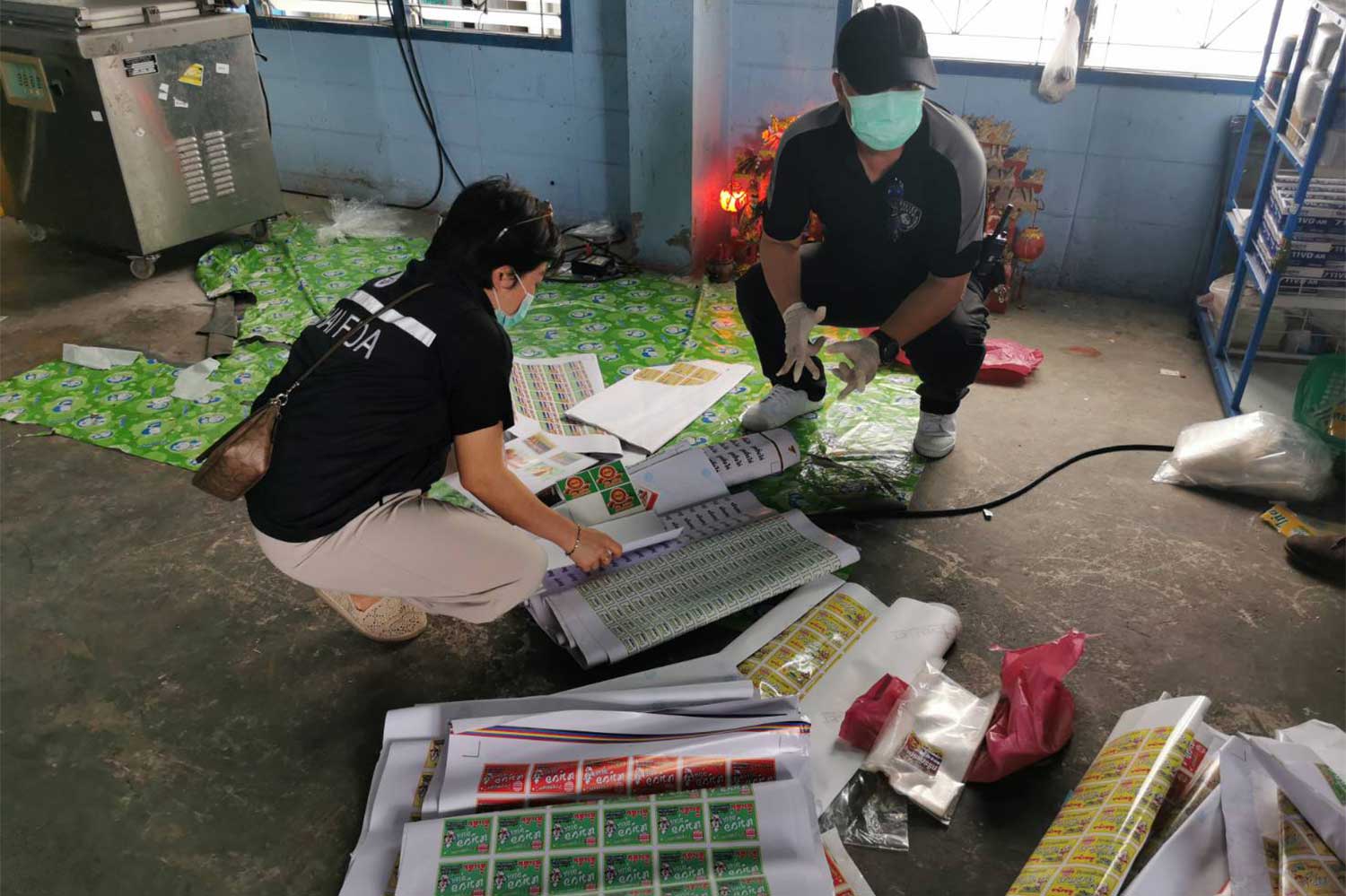 Product labels found at the sausage factory matched those on the food eaten by the stricken students. (Photo supplied)

The factory produced 32 brands, with some products displaying halal certificates. The team confiscated products worth about 700,000 baht for inspection and the factory owner was detained for questioning.

Authorities also ordered the closure of the factory.

Pol Col Nethi said the factory violated many sections of the Food Act. These included Section 6 (7) by producing food products that failed to follow good manufacturing practice. This violation carried a fine of up to 10,000 baht; and Section 6 (10) in displaying false product labels, which carries a fine of up to 30,000 baht.

If prohibited substances were found in the products, the factory would face charges of producing contaminated food products, which carries a penalty of up to 2 years in prison and/or fine of 20,000 baht.

So far, no charges had been pressed.

In Trang, health officials on Wednesday inspected a sausage stall at a market in Wang Wiset district where a parent of one student who was admitted to hospital had bought food, Thai PBS reported.

FDA deputy secretary-general Withit Saritdeechaikul said methemoglobinemia occurred when red blood cells contained abnormal amounts of methemoglobin and this resulted in a lack of oxygen in the body. Symptoms included fatigue, dizziness and shortness of breath. Severe affliction could result in blueness around the hands and feet, unconsciousness or even loss of life, Dr Withit said. 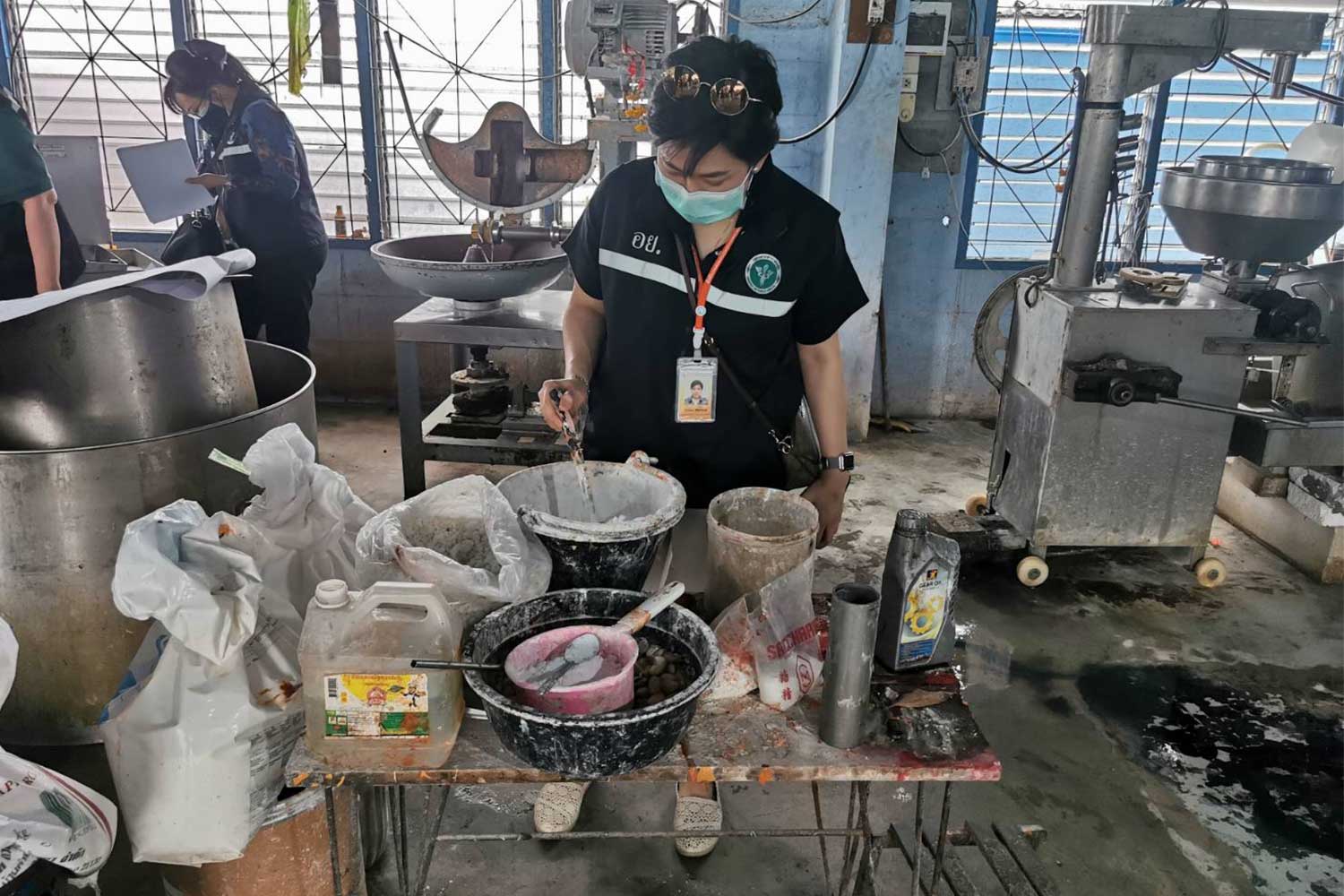 A Food and Drug Administration official inspects the contents of a pot at the sausage factory in Chon Buri. (Photo supplied) 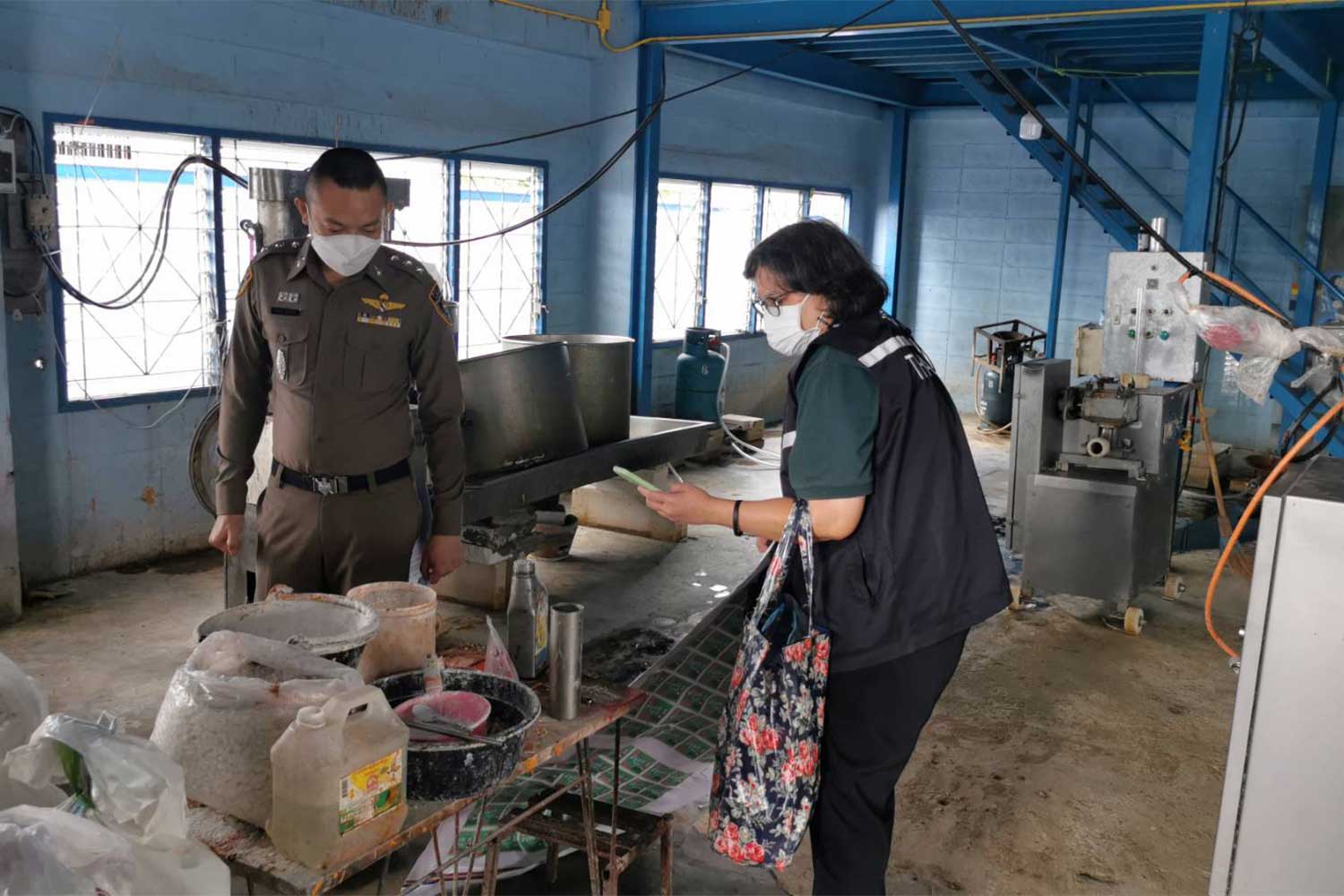