A Indochinese tiger missing its right back leg, photographed recently by a camera trap eating a dead buffalo in forest inside Khao Laem National Park in Kanchanaburi, near where a Karen man was badly mauled when attacked by three tigers late last month. (Photo supplied: Piyarat Chongcharoen)

KANCHANABURI: A tiger with only three legs has been photographed eating a dead buffalo in Khao Laem National Park, near where a Karen man was recently attacked by three tigers that killed two of his dogs.

The tiger was photographed after Freeland Foundation members and park rangers set up 20 camera traps to track tigers between Feb 4 and Feb 7. This followed an attack on a local man living inside the national park last month.

Rangers have since found the carcass of a buffalo in the Samathor junction area, where camera traps were installed. A check found the cameras had photographed a Indochinese tiger eating the buffalo carcass. The tiger was missing its right rear leg, Mr Niphon said.

The lame tiger was believed to be one of the three tigers that had attacked and mauled the Karen man late last month, he said. 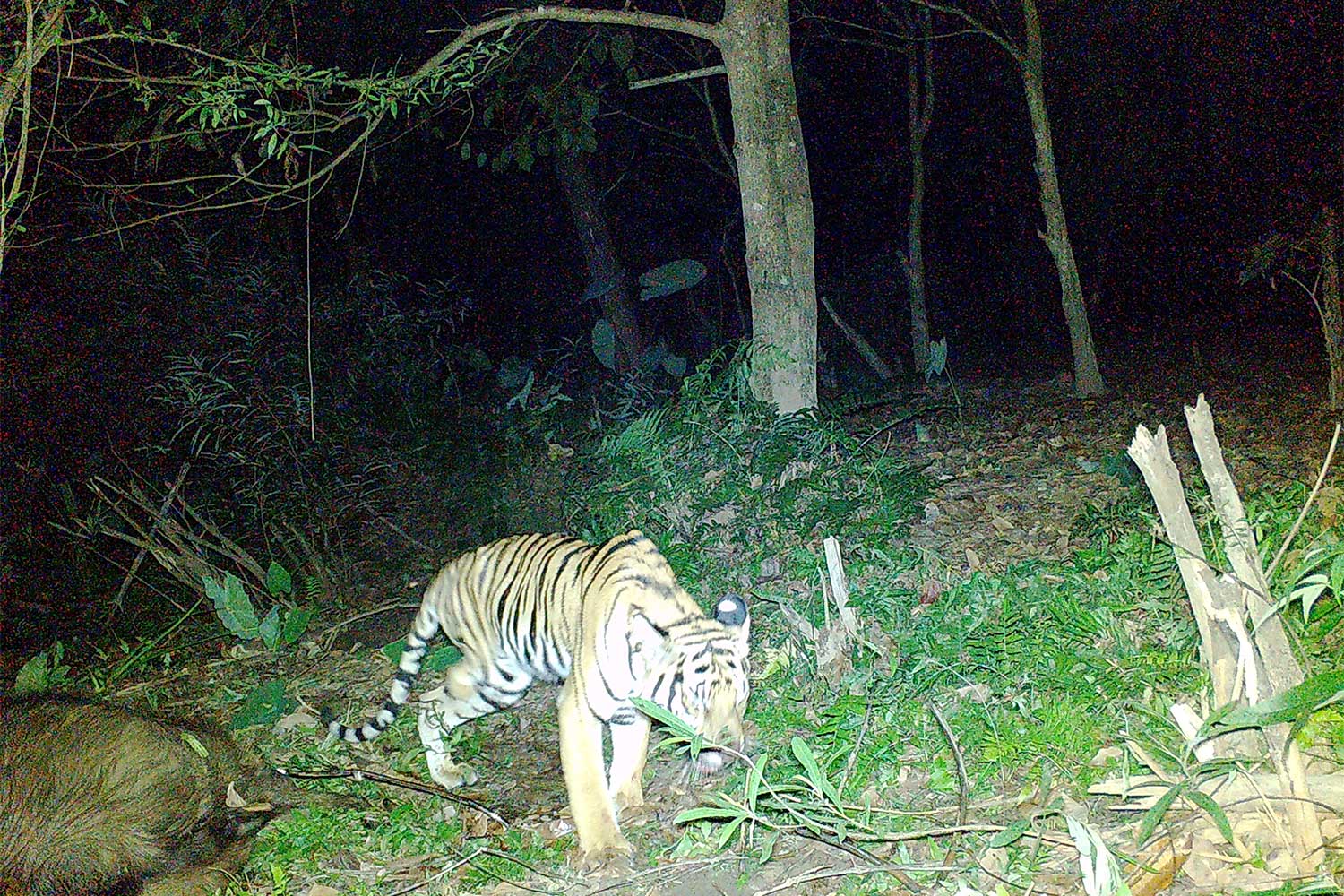 The three-legged tiger near the dead buffalo it fed on. (Photo supplied)

The Karen man, identified as Wan, 46, was injured in the tiger attack on Jan 28.  Mr Wan was accompanied by three dogs when he left his village in tambon Pilok in Thong Pha Phum district to round up his nine buffaloes, which were grazing in the forest.

He said he was attacked by three tigers. He was badly mauled but managed to flee up a tree to escape them. Two of his dogs were killed.

Mr Niphon said the Freeland Foundation and the International Union for Conservation of Nature (IUCN) have recommended that the disabled tiger be captured and taken to a safe place. A tiger with only three legs would find it hard to catch food.

Pilok Khi village was located inside the national park and near the tiger's habitat. The crippled big cat could be in danger, he said, citing the killing of two Indochinese tigers recently by five men from Pilok Khi village.

Mr Niphon said he had sent a letter to the Department of National Parks, Wildlife and Plant Conservation asking for help for the disabled tiger.

Patrols from the Khao Laem and Thong Pha Phum national parks would guard local residents against tiger attacks. They would also guard the three-legged tiger against any possible danger while in the forest, he said.

After the five villagers were caught for killing the two Indochinese tigers in Thong Pha Phum National Park early in January, local residents decided to move their cattle, numbering 120, to graze in forest near Pilok-Samathor creek, inside Khao Laem National Park.

Less than a month later, the Karen tribal man was seriously injured by tigers. 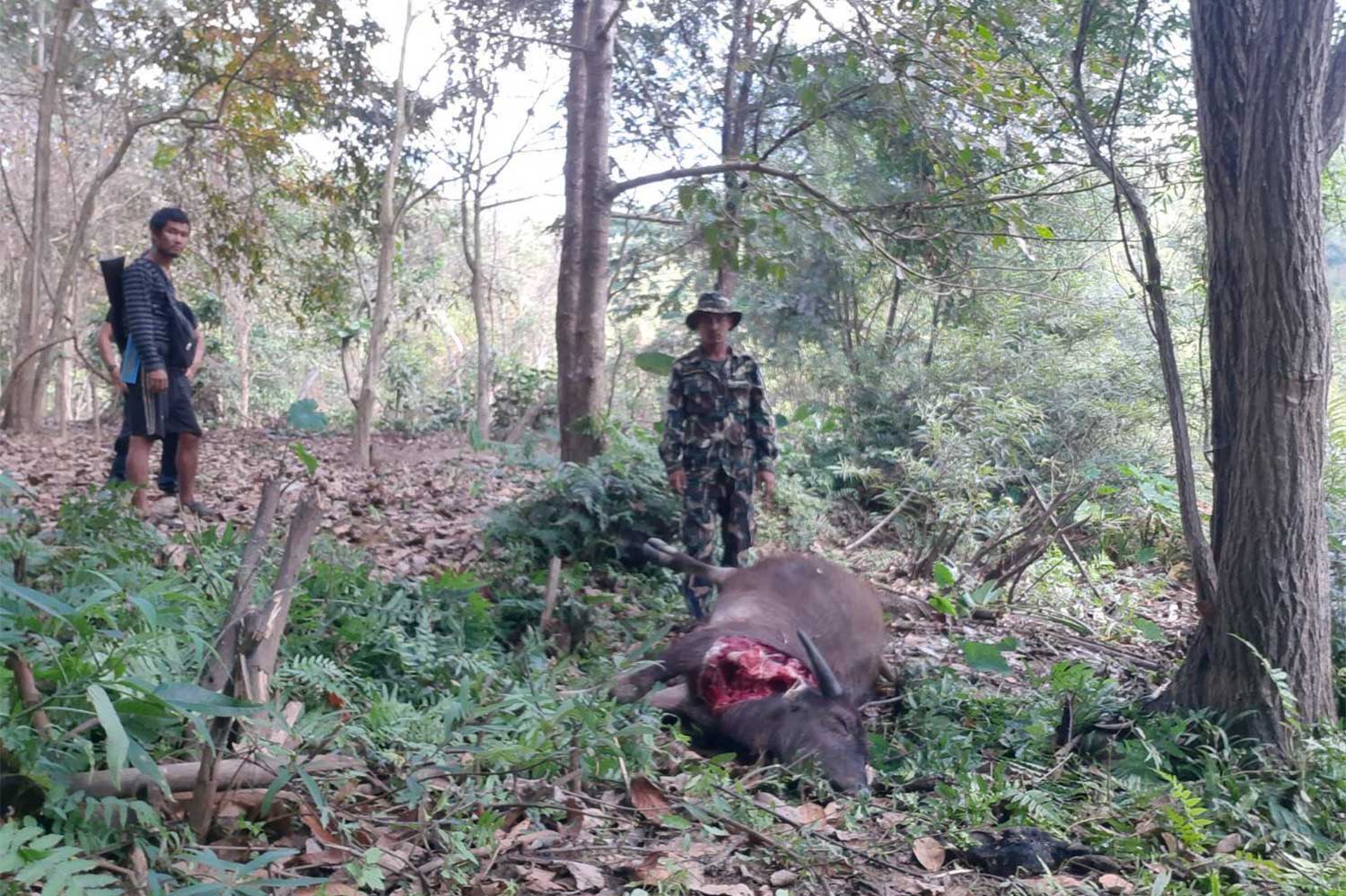 National park rangers with the carcass of a buffalo the three-legged tiger was feeding on when captured by a camera trap. (Photo: Piyarat Chongcharoen)