Finance Minister Arkhom Termpittayapaisith has outlined eight areas Thailand needs to work on over the next decade to raise the country's competitiveness.

The minister discussed eight areas that Thailand must address to improve its overall competitiveness in the next decade.

The first was climate change, he said.

With the global community setting the goal of carbon neutrality and a net-zero balance, Thailand must join the drive.

One government policy designed to support a reduction of carbon emissions was its comprehensive electric vehicle (EV) promotion plan.

Another area was the promotion of digital technology, which is one of 12 targeted industries. Digital technologies have played a key role in the past two years especially in payment systems, peer-to-peer lending and cloud funding, Mr Arkhom told the gathering.

He said the government will promote these innovations, but the Bank of Thailand and the Securities and Exchange Commission will provide oversight to make sure they do not affect the country's financial stability.

The third area was promoting the health and wellness industry, which has strong potential, he said.

The private sector has taken the initiative and incorporated health and wellness and living trends among elderly people in their business model. Property developers, for example, have built accommodation to cater to older foreigners seeking long stays in Thailand.

Mr Arkhom said the country needs to do more to promote SMEs, adding the Finance Ministry is considering how to support those interested in investing and launching start-ups.

Although the tourism industry usually accounts for 12% of GDP, with up to 40 million international travellers visiting the country annually prior to the pandemic, Thailand must shift from quantity to quality when it comes to tourism, said the minister.

He said the country must pay more attention to attracting travellers with high spending power as opposed to relying on mass tourism, which is known to have a negative impact on the environment and natural resources.

Mr Arkhom said the country must also create a social safety net, especially for grassroots people, and promote savings among the workforce to help them meet their future living needs.

He said the transition to an ageing society remains a challenge for the country and demands careful planning.

He described this as a global issue due to the massive public spending needed over the last two years to alleviate the economic impact of the Covid-19 pandemic. 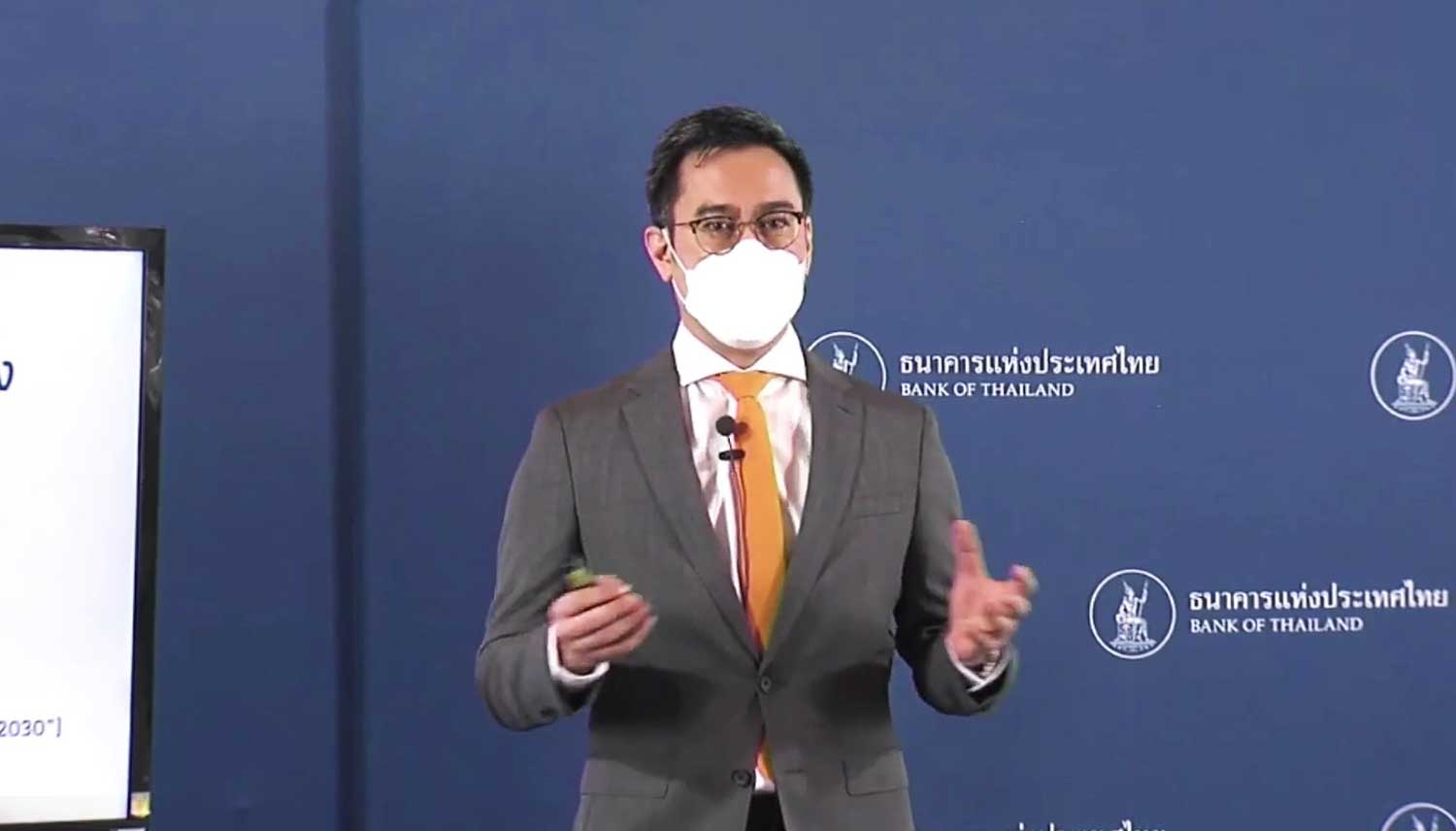 Bank of Thailand governor Sethaput Suthiwartnarueput delivers a speech on stability, equity and monetary policy for national development at the online event.

He was speaking during a virtual seminar, “Future of Growth: Thailand Vision 2030”, hosted by the Post Today newspaper.

Last week the central bank released a public consultation on the topic of “Repositioning Thailand’s Financial Sector for a Sustainable Digital Economy” to lay out its principles and policy directions for a new financial landscape.

The repositioning of the financial sector needs to strike the right balance between promoting innovation and managing risk, as well as allowing for flexibility in dealing with abrupt changes, it said.

With regards to the new financial landscape, the BoT expects the financial sector to leverage on technological advancement to drive innovation and provide inclusive financial services and consumer protection in a level-playing field and competitive environment.

Mr Sethaput said the BoT must first clarify what it should promote, as opposed to what is just hype in the market.

That does not mean the central bank is averse to change, but rather that it intends to adapt to keep pace with the changing financial landscape.

He said that heavily hyped payment innovations must prove they can function better than the existing system if they have any hope of replacing it.

That said, the BoT is not overly conservative and is ready to consider alternatives if they provide solid advantages, he added.

He said the central bank plans to capitalise on advanced technology to reinforce its regulating process.

It will keep rolling out infrastructure to promote financial innovation, he said.

The bank is expected to pilot its retail central bank digital currency (CBDC) for the public in the fourth quarter of this year.

The initiative is a collaboration between the BoT, 11 financial institutions under the Thai Bankers’ Association, and the Government Financial Institutions Association.

The service is a financial information exchange for sending and receiving bank statement data directly between banks in a machine-readable digital format.

It allows customers who need to submit their bank statements as supporting documents to request and send the data directly from one bank to another using their own mobile banking apps or via other channels.

Initially, the service will be provided by six banks and five more banks will offer the service later in the first half of this year.

Mr Sethaput said while the central bank has adapted to the changes, it has maintained the role of promoting a centralised payment system backed by the lender of the last resort.

This is to ensure financial stability. He added that if payments are not centralised, some problems could arise.