A nurse is teaching parents at a special clinic in Khon Kaen province in 2019. (Photo: Thana Boonlert)

Thailand's falling birth rate is poised to wreak havoc on the economy and society, with experts saying the trend will see the country's workforce shrink and more senior citizens adding to the burden of their relatives.

Deputy Public Health Minister Sathit Pitutecha said the declining rate is threatening to unleash a host of problems, especially considering the nation's average life expectancy is set to increase, from between 70-80 at present to 90-100 in the future.

The problems, he said, range from labour shortages to social and economic malaise.

Mr Sathit said the solution may be to encourage people to have more children by promoting childbirth as a way to contribute to society.

"It's a long-term effort that we need to commit to, regardless of who's in charge of the government," he said.

The director-general of the Department of Health, Suwannachai Wattanayingcharoen, said the drop in population numbers can be traced back to a family planning policy which was first launched in 1970.

The Office of the National Economic and Social Development Council said if the trend continues unabated, by 2040, children will only account for 12.8% of the total population, with the elderly accounting for 31%.

Dr Suwannachai said the increasing number of senior citizens will have an impact on working-age individuals, the numbers of which are gradually shrinking. 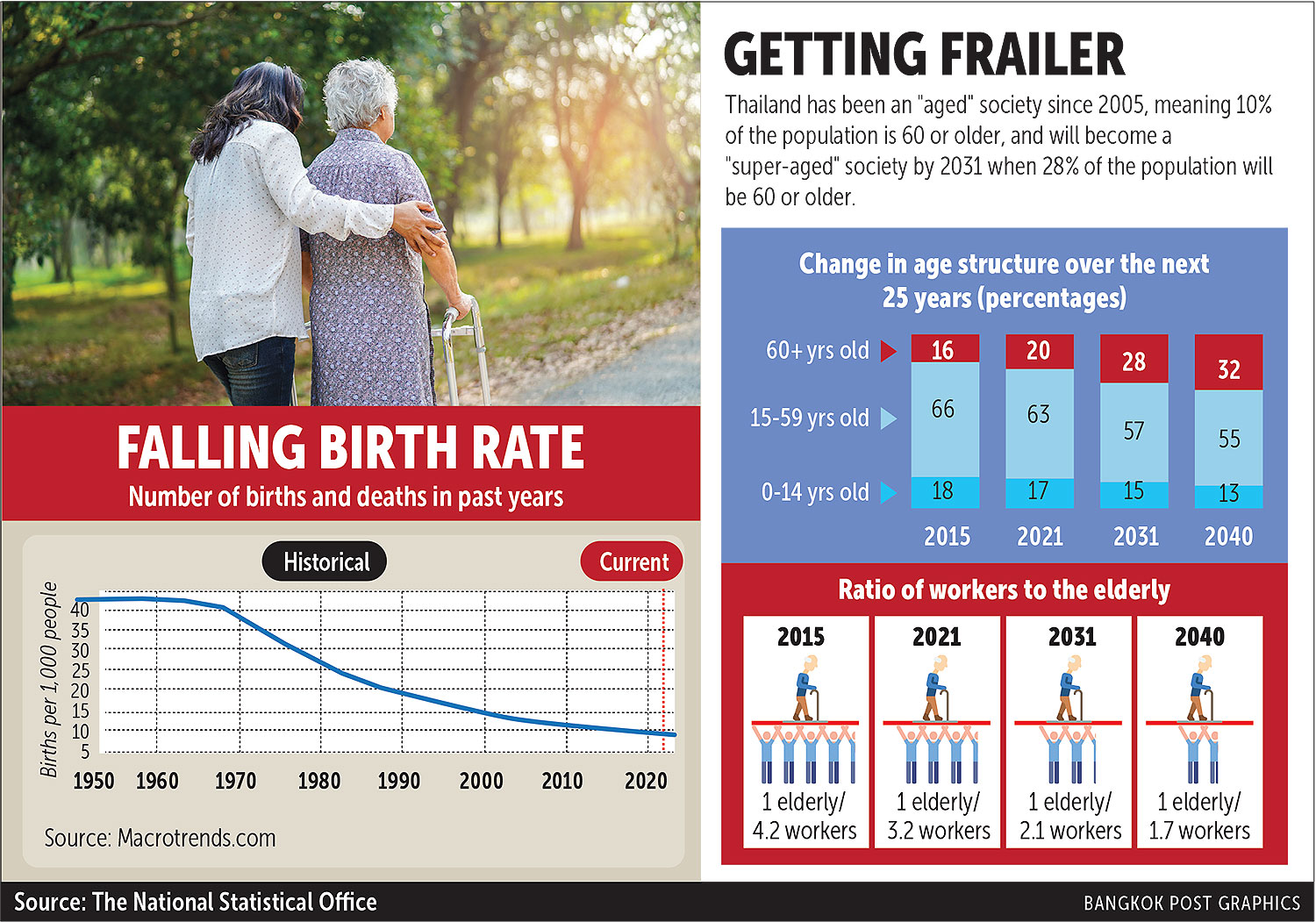 The shrinking working-age population will also mean less tax revenue for the government, which may lead to a shortfall of funds for caring for the elderly.

Witthaya Thithapan, president of the Royal Thai College of Obstetricians and Gynaecologists, said while many infertile couples are interested in treatments that they hope will allow them to conceive, such treatments are very costly in Thailand. Combined with the low success rate of about 30%, many simply cannot afford to go through with the treatment, he said.

At the same time, more and more people are starting their families late. Many are now choosing to wait until after they have graduated from university and feel they are financially secure to have babies, according to Somsak Lolekha, president of the Royal College of Paediatricians of Thailand.

If the current trend continues, the country's population may plunge from the current 66 million to 40 million soon, he warned.

Tongjai Suthas na Ayutthaya, assistant permanent secretary for labour, said the state is offering help that would help parents raise children and hopefully push them to have more babies, such as breastfeeding corners and day care centres at factories.