Girl, 17, charged with strangling her grandmother, dumping her body

Police arrive outside the rented premises in Muang district of Nakhon Ratchasima where a teenage girl allegedly strangled her 62-year-old grandmother whose body was found in a plastic bin dumped on a roadside in Suphan Buri. Angry neighbours prevented a full re-enactment of the crime. (Photo: Prasit Tangprasert)

NAKHON RATCHASIMA: A 17-year-old girl has allegedly admitted that she strangled her grandmother at their home in Muang district and with the help of her boyfriend dumped the body on a roadside in Suphan Buri.

She and her boyfriend were arrested by police in Tak on Tuesday.

The 17-year-old suspect (whose name was withheld) and her boyfriend Pathiphon Chantharamonthon, 23, were later taken by police investigators to the rented premises behind Wat Samorai in Muang district of Nakhon Ratchasima, where the crime allegedly occurred, for a re-enactment around 6pm.

However, more than 200 angry people had gathered outside the premises. Police did not dare to take the suspects out of the vehicle they arrived in for fear they might be attacked.

The pair were arrested on Tuesday afternoon at a road checkpoint in Mae Sot district of northern Tak province. Police and soldiers manning the checkpoint and on the look out for drug smugglers stopped a passenger van for a search.

They noticed two passengers, a young woman and a young man, acting suspiciously.

They asked the pair to get out of the van and searched their belongings. They learned the girl was the granddaughter of a 62-year-old woman whose body was found on Sunday in a garbage bin dumped on the side of Road 340, the Suphan Buri - Chai Nat route, in Doembang Nangbuat district of Suphan Buri.

Police said the dead woman was Somsri Mamkrathok, 62, a native of Saraburi province.

The woman's 17-year-old granddaughter, who lived with her in Nakhon Ratchasima, had disappeared. Police wanted to question her.  (continues below) 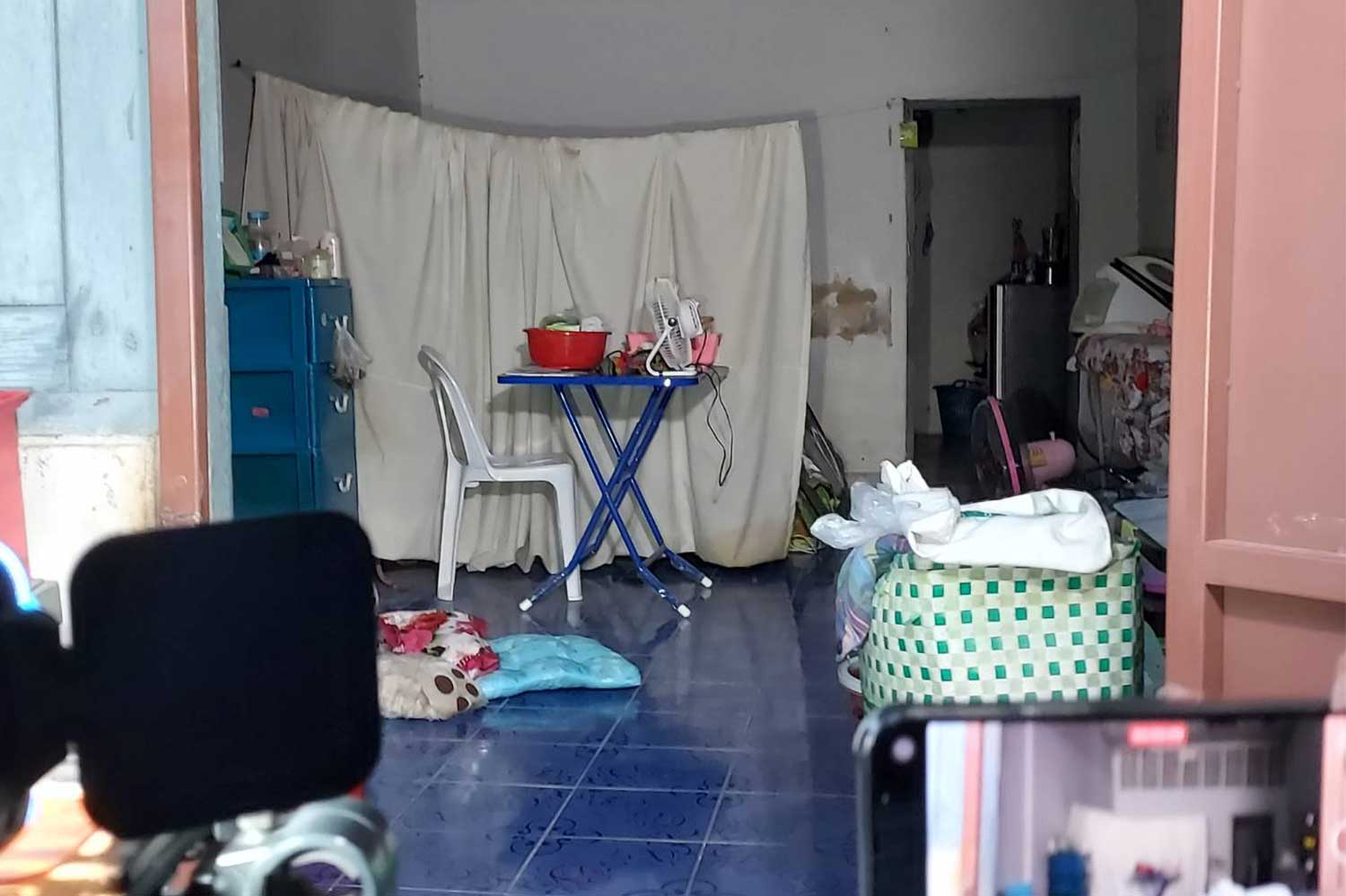 Investigators tracked her mobile phone, which showed she was in Mae Sot district. They then asked local police to help find her, and she was subsequently taken off the passenger van on Tuesday.

During initial questioning, the girl allegedly admitted to having choked her grandmother until she lost consciousness, and then finished the job with a rope she tied tightly around the old woman's neck, according to Pol Lt Col Charn Iemwijarn, deputy investigation chief at Suphan Buri’s Boembang Nangbuat police station, who is leading the case.

She then phoned her boyfriend, who lived in Tak, asking him for help to dispose the body, according to Pol Lt Col Charn.

The suspect said she was stressed staying with her grandmother, who prohibited her from having friends, girls or boys. She said her grandmother had always insisted on taking her with her, wherever she went, since childhood.

About 8.45pm on Wednesday, police decided to take her boyfriend, Mr Pathiphon, into the rented premises for a crime re-enactment, while his girlfriend remained in the police pickup outside.

As soon as the young man was taken out of the vehicle, the angry crowd began scolding and cursing him. After the re-enactment, he was immediately taken back to the police vehicle.

A source said the girl met Mr Pathiphon via Facebook. After the murder, she contacted him to help move the body. He drove a pickup from Tak and allegedly helped her take the body from the room.

He saw a garbage bin on the roadside in Suphan Buri, put the body inside it and dumped it in some bushes. He abandoned the pickup truck further along the road and took a passenger van to Mae Sot, where he and his girlfriend were subsequently arrested.

According to TV Channel 7 news, Pol Lt Gen Thanayut Wutcharasthamrong, commissioner of Provincial Police Region 7, said the victim's husband told police he had borrowed 100,000 baht from the State Railway cooperative and given it to his wife. She took care of the family’s finances and had often won money on the underground lottery.

He believed his granddaughter and her boyfriend conspired to use her ATM card to withdraw the 100,000 baht for their own use. This sparked a quarrel that led to the murder, according to the report. 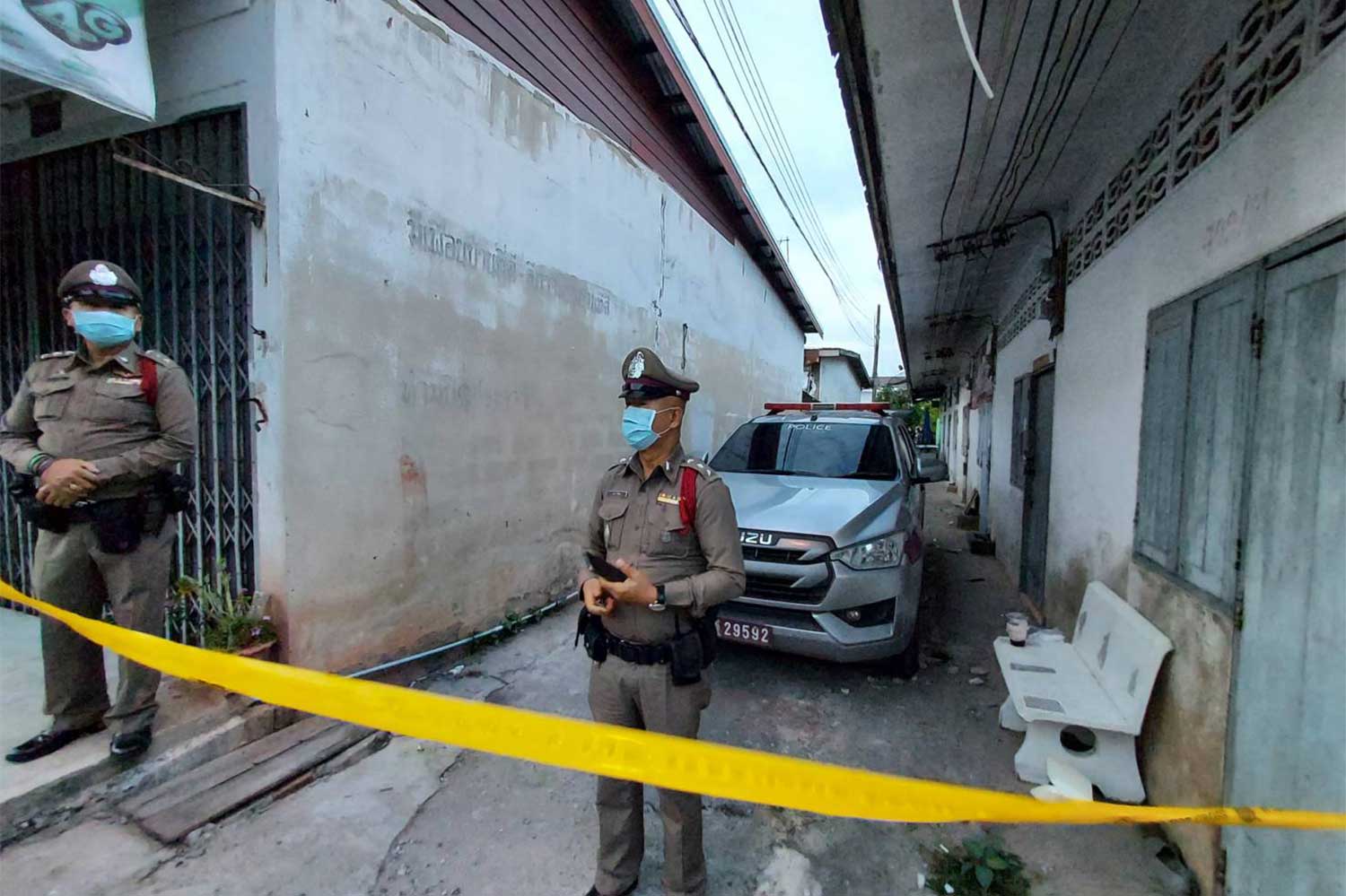 Police guard the cordoned off rented premises where the 62-year-old woman was strangled. (Photo: Prasit Tangprasert)