Police and officials from Conservation Forest Management Administration Office 1 remove the bagged and boxed macaques from the deserted house where they were found in Phra Phuttabat district of Saraburi province on Thursday morning. They were taken to a wild animal shelter. (Photo: Police TV Facebook)

Thirty macaques restrained in sealed bags and boxes were found in an unoccupied building in Saraburi province police believe was used by wildlife traffickers to evade vehicle searches at a nearby checkpoint.

Police raided the building in Phra Phuttabat district in the small hours of Thursday after being alerted by passing motorist Phirom Phranavee, who reported hearing the animal's  loud screeches as she drove by the place with her younger sister.

Police found 29 live macaques, either stuffed in plastic boxes in the living room or in bags hanging from a nylon rope strung in the bathroom. Another was found dead outside the building.

Violators face a maximum fine of 500,000 baht and/or five years imprisonment. (continues below) 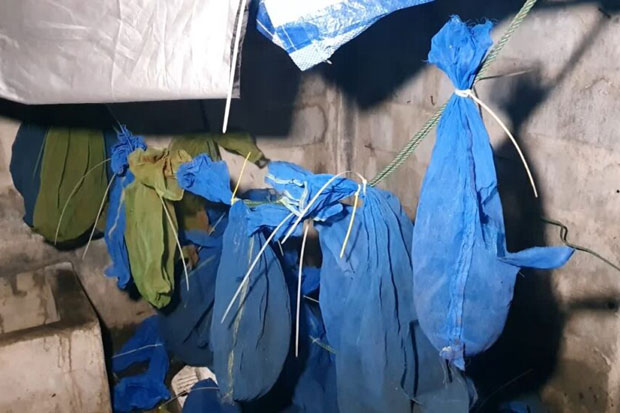 Pol Capt Nawaret said it was likely the captive primates were left there by wildlife traffickers to avoid a vehicle search at a nearby police checkpoint. They would have returned down a side track to collect them after passing through it.

Ms Phirom, who was with police during the inspection, said she had not expected to see so  many macaques when she and her sister reported the noises.

The macaques were taken to a wild animal shelter in Nakhon Nayok province.