People queue up at Suvarnabhumi airport as the government on Wednesday decided to replace the second RT-PCR test with an antigen test for fully-vaccinated international travellers and lower minimum health insurance to US$20,000. (Photo: Wichan Charoenkiatpakul)

The government has agreed to relax entry requirements for overseas arrivals by replacing the second RT-PCR test with an antigen test kit (ATK) and reducing health insurance coverage for foreign visitors from at least US$50,000 to $20,000.

The eased measures were agreed upon Wednesday at a meeting of the Centre for Covid-19 Situation Administration (CCSA) chaired by Prime Minister Prayut Chan-o-cha.

The proposal was put forward by the Department of Disease Control (DDC) and the Emergency Operation Centre under the Public Health Ministry.

The revised entry rules come about a month after the Feb 1 resumption of the Test & Go entry scheme. That was suspended in late December in a bid to curb the spread of the Omicron variant.

Effective from March 1, the second RT-PCR test required by the Test & Go scheme on Day 5 will be scrapped and replaced with ATK testing.

The revised programme will require only one night of SHA Extra Plus or Alternative Quarantine accommodation booking on the day of arrival, instead of two nights.

Foreign visitors who are required to have health insurance will need coverage of at least US$20,000, instead of US$50,000, under the revised programme.

The two other pre-travel requirements -- proof of Covid-19 vaccination and negative RT-PCR test results no more than 72 hours before travel to Thailand -- remain unchanged.

Deputy Prime Minister and Public Health Minister Anutin Charnvirakul said on Wednesday the health insurance coverage will be lowered to reduce travel costs and give foreign visitors an incentive to come. 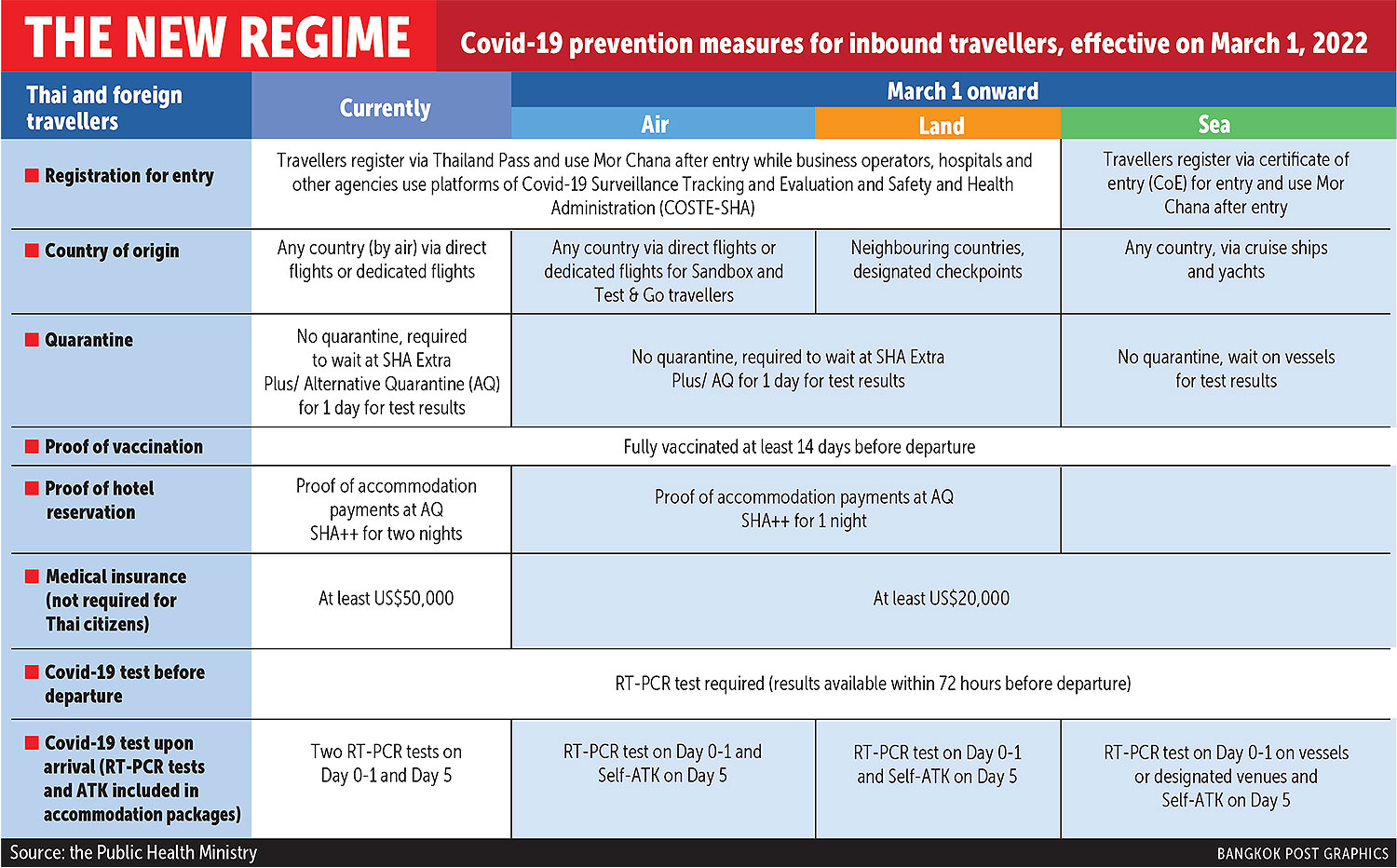 Citing figures from the National Health Security Office (NHSO), he said medical expenses for severe cases run to about 300,000 baht per head.

"If coverage was set at $30,000 it would add burdens to those visiting for pleasure and for business. So it is reduced further to at least $20,000 which should cover the medical costs," he said.

He said Thailand's Covid-19 infections are mostly domestic while "imported cases" are relatively low, estimated at one per 1,000 visitors.

The minister also stressed the government's readiness to set up more field hospitals if necessary to cope with a surge in the number of Covid-19 patients.

With cases growing, Mr Anutin said the ministry's focus is on reducing severe cases and thus preventing deaths. He called on people to get vaccinated as soon as possible and avoid risky activities.

The Public Health Ministry on Wednesday reported a daily caseload of 21,232 new infections, 39 deaths and 16,890 positive ATK results over the previous 24 hours. Those are the biggest one-day increases this year.

"To get zero cases we will have to go for lockdown measures, but we've already passed that point and the virus doesn't seem to cause severe illnesses like it did in the beginning," Mr Anutin said.

Deputy Public Health Minister Sathit Pitutecha said the CCSA is concerned about the rise in cases and has stressed the need to support home and community isolation centres.

The government is maintaining the current Covid-19 containment measures but has ordered state agencies to increase community isolation centres to cope with the surge.