Travellers protect themselves from infection at Suvarnahumi airport in Samut Prakan on Wednesday when the country logged 23,557 new Covid-19 cases and 38 more fatalities. (Photo: Wichan Charoenkiatpakul)

The Public Health Ministry on Thursday reported a record daily increase of 23,557 new coronavirus infections during the previous 24 hours, as the kingdom deals with an outbreak driven by the Omicron variant.

The number of daily Covid-related deaths, however, was 38 -- well below the 184 fatalities reported on Aug 13 last year, when Thailand recorded its previous daily record of 23,418 infections.

A World Health Organization official said last month there is evidence the Omicron variant causes milder symptoms than previous variants and while case numbers have surged to records in many places, hospitalisation and death rates have often been lower than in earlier phases of the pandemic.

Up to now, about 69% of people in Thailand have been fully vaccinated, compared with about 12% at the end of August.

There are currently just below 181,000 people receiving treatment in hospital or isolating in the community, versus more than 212,000 on Aug 13 last year, data from the health ministry showed.

The 38 new fatalities were between the ages of seven and 97 years old.

Bangkok had 10 new deaths while there were four more fatalities in the adjacent provinces of Nakhon Pathom (2) and Samut Prakan (2).

Other central plain provinces further from the capital recorded seven more deaths - two each in Lop Buri and Chanthaburi and one each in Rayong, Samut Songkhram and Saraburi.

The Northeast had two new fatalities in Nakhon Phanom and Buri Ram.

The South reported eight more deaths - two in Phuket and one each in Krabi, Chumphon, Trang, Phangnga, Phatthalung and Satun.

During the previous 24 hours, 16,131 Covid-19 patients were discharged from hospitals after recovering from the coronavirus. 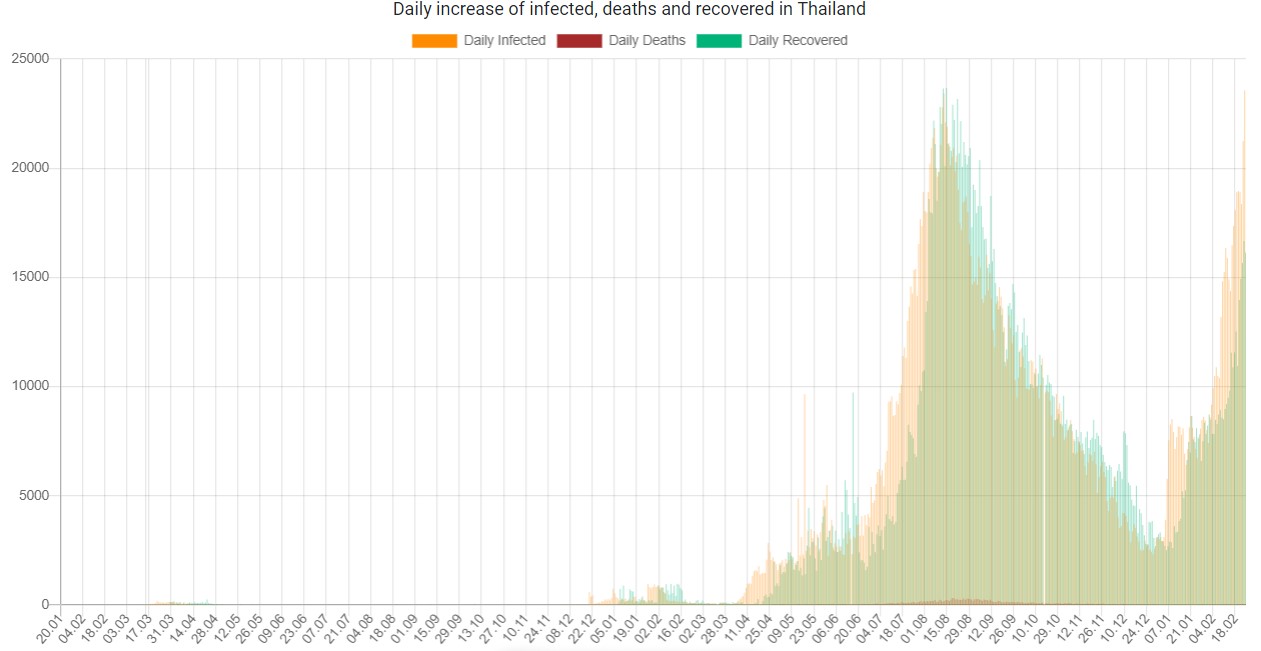 Of the 23,557 new cases, just 228 were detected in new arrivals from other countries. The rest were all local transmissions, including 96 in prisons.

The figures did not include 22,240 positive results from antigen tests over the past 24 hours.

The 228 imported cases included 58 from Russia, 26 from Cambodia, 20 from Germany, 13 from the United Kingdom, 11 from Singapore, 10 from Kazakhstan and eight each from Myanmar and France.