A student gets a Covid-19 jab at Rittiyawannalai School in Sai Mai district of Bangkok. Children between the ages of 5-11 are now eligible for a vaccine, with inoculations starting with older students on Monday. (Photo: Apichit Jinakul)

New cases have declined about 20% from the 25,615 posted on Friday. On Monday morning, authorities announced 22,311 new cases and 42 fatalities.

Deaths from the virus remain far lower than during the Delta wave last year, when the toll hit a peak of 312 on Aug 13.

The vast majority of the 20,420 new cases announced Tuesday were locally transmitted, with just 171 infections found in arrivals from other countries. Prisoners accounted for 66 of the domestic cases.

Of the local cases, 19,826 were confirmed at hospitals and 357 via mass testing

Despite the decline, the number of new cases still exceeded the 18,297 recoveries on Monday.

The 171 imported cases were from 38 countries and included 35 from Russia, 15 from Germany, 11 from the United Kingdom and 10 each from the United Arab Emirates and Indonesia. 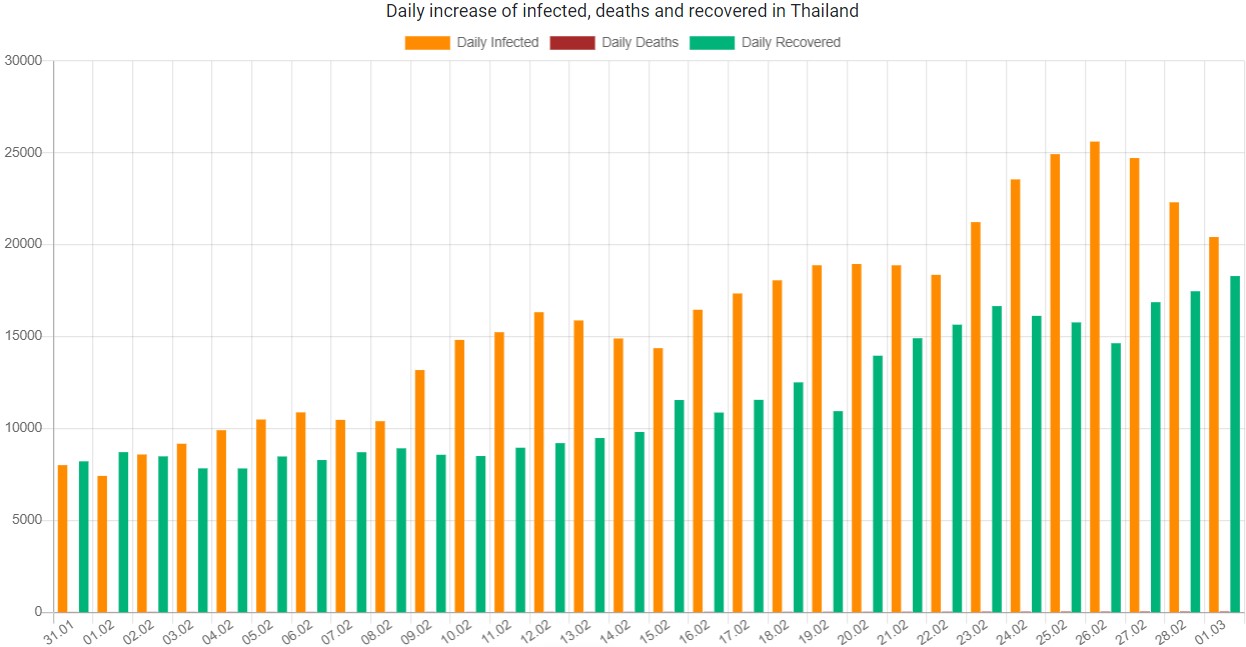 The 42 new fatalities were between the ages of 1 and 94 years old.

Bangkok had five new deaths while there were two more fatalities in the adjacent province of Samut Sakhon.

Other central plain provinces further from the capital recorded seven more deaths - two in Suphan Buri and one each in Chachoengsao, Trat, Prachin Buri, Lop Buri and Saraburi.

The Northeast had two new fatalities in Kalasin and Maha Sarakham.

The South reported 13 more deaths - three in Krabi, two each in Ranong and Songkhla and one each in Chumphon, Pattani, Phangnga, Yala, Satun and Surat Thani.

The North saw 14 new fatalities - three in Tak, two each in Chiang Mai, Mae Hong Son and Phitsanulok and one each in Chiang Rai, Kamphaeng Phet, Lampang, Sukhothai and Uttaradit.Since the pandemic started in early 2020, there have been 2,912,347 Covid-19 cases, including 688,912 cases this year, with 2,673,646 complete recoveries to date.

The accumulated death toll stood at 22,976 since the beginning of the pandemic, including 1,278 so far this year.

The 24-hour period also saw 18,297 Covid-19 patients discharged from hospitals after recovering from the coronavirus.