People visit the Thai Teaw Thai Fair at the Bangkok International Trade and Exhibition Centre (Bitec) in Bang Na district, Bangkok. The tourism fair is being held from Mar 3 to 6, 2022. (Photo: Somchai Poomlard)

The figures did not include 33,085 positive results from antigen tests over the past 24 hours.

This compared with the 54 coronavirus-related fatalities and 23,834 new cases reported on Friday morning.

The Centre for Covid-19 Situation Administration (CCSA) said on Saturday afternoon that the 52 new fatalities — 33  men and 19 women — were aged between six months to 104 years with an average age of 72. By nationality, 51 were Thais and one was from Myanmar.

Bangkok had seven new deaths and there were seven more in adjacent provinces – three in Samut Sakhon, two in Samut Prakan and one each in Nakhon Pathom and Nonthaburi.

Other central plain provinces further from the capital saw 12 more deaths – two each in Chon Buri, Ratchaburi and Sing Buri, and one each in Kanchanaburi, Chanthaburi, Chachoengsao, Trat, Rayong and Ang Thong.

The Northeast saw 11 new fatalities – two each in Si Sa Ket, Roi Et, Surin and Nong Khai, and one each in Kalasin, Nakhon Ratchasima and Ubon  Ratchathani.

The North logged seven more deaths – two in Chiang Mai and Uttaradit and one each in Phetchabun, Nan and Phitsanulok.

The South reported four new deaths – four in Phuket and one each in Krabi, Trang, Yala and Satun.

There were 22,566 new cases in the general population, 115 among prison inmates and 137 imported ones.

The 137 imported cases were from 30 countries. They included 32 from Myanmar, 21 from Russia, 12 from the United Kingdom, nine from Germany, eight from France, and seven from Sweden.

The 24-hour period also saw 18,462 Covid-19 patients discharged from hospitals after recovering from the coronavirus.

Vaccinations continued to progress, with 124.64 million doses administered as of Friday. According to the CCSA, 77.4% of the population have now received at one dose of the vaccine, 71.7% have received two shots, and 30.1% have had a booster.

The death toll stood at 23,176 since the beginning of the pandemic, including 1,478 so far this year.

The highest number of Covid-related fatalities in a 24-hour period was 312 recorded on Aug 13. 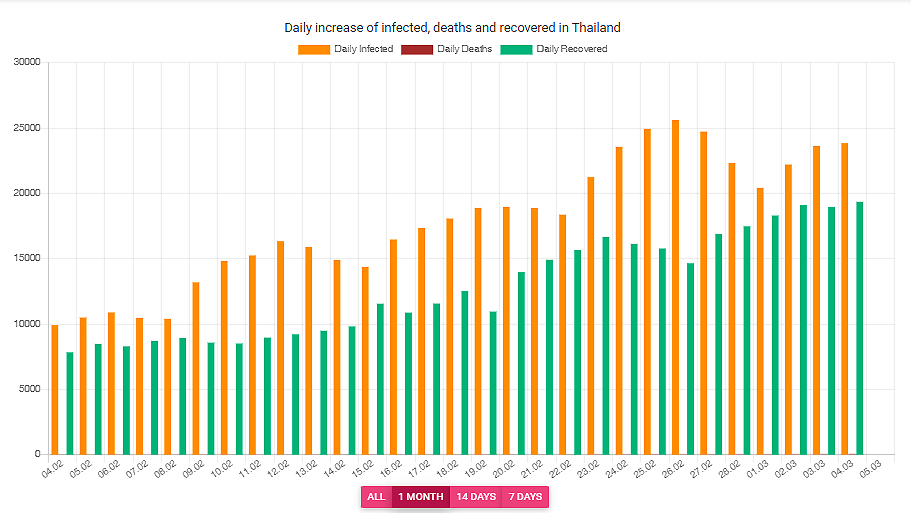