There were 65 more Covid-19 fatalities and 21,162 new cases recorded during the previous 24 hours, the Public Health Ministry reported on Monday morning.

This compared with the 59 coronavirus-related fatalities and 21,881 new cases reported on Sunday morning.

The confirmed new cases did not include 24,236 positive results from antigen tests over the same period. This would bring the total number to 45,398, Sumanee Wacharasin, hazard communication director of the Department of Disease Control, said in the afternoon briefing.

“The number of patients with lung inflammation and dependent on ventilators is also increasing as daily new cases rise,” Dr Sumanee said.

Bangkok had seven new deaths and there were eight more in adjacent provinces – three each in Samut Prakan and Samut Sakhon and one each in Nakhon Pathom and Pathum Thani.

Other central plain provinces further from the capital recorded 15 more coronavirus-related deaths - two each in Kanchanaburi, Chachoengsao, Chon Buri, Prachuap Khiri Khan, Lop Buri and Sa Kaew and one each in Trat, Saraburi and Ang Thong.

The South reported 17 more deaths - three in Trang, two each in Krabi, Chumphon, Phatthalung, Yala, Satun and Surat Thani and one each in Pattani and Phuket.

The North had six fatalities - two in Chiang Rai and Phitsanulok and one each in Mae Hong Son and Uttaradit.

“The most new deaths were in the South. Sixty-five percent of the new fatalities were unvaccinated,” Dr Sumanee said. 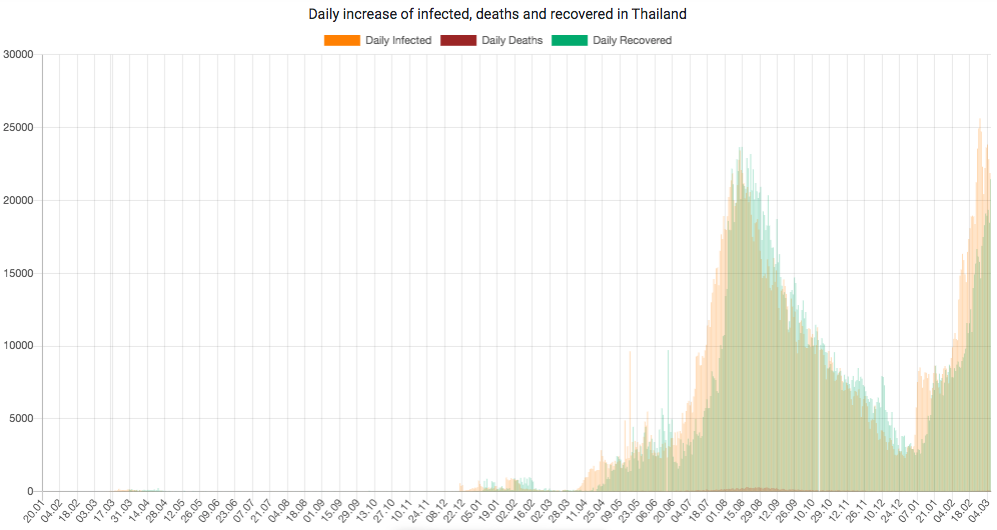 There were 20,986 new infections in the general population, 74 among prison inmates and 102 imported cases.

Of the local Covid-19 infections, 20,784 were confirmed at hospitals and 202 via mass testing.

On Sunday 230,459 people received Covid-19 treatment at hospitals, including 1,148 seriously ill patients with lung inflammation and 375 dependent on ventilators. Dr Sumanee said that 161,493 patients were at home and community isolation centres.

The 24-hour period also saw 23,159 Covid-19 patients discharged from hospitals after recovering from the coronavirus.

The death toll stood at 23,300 since the beginning of the pandemic, including 1,602 so far this year.