There were 69 more Covid-19 fatalities and 22,073 confirmed new cases during the previous 24 hours, the Public Health Ministry announced on Wednesday morning.

This compared with the 69 coronavirus-related fatalities and 18,943 confirmed new cases reported on Tuesday morning.

The figures did not include 31,890 positive results from antigen tests over the past 24 hours. If included, it took the number to 53,963.

The 69 latest fatalities were between the ages of 17 and 95 years. (continues below) 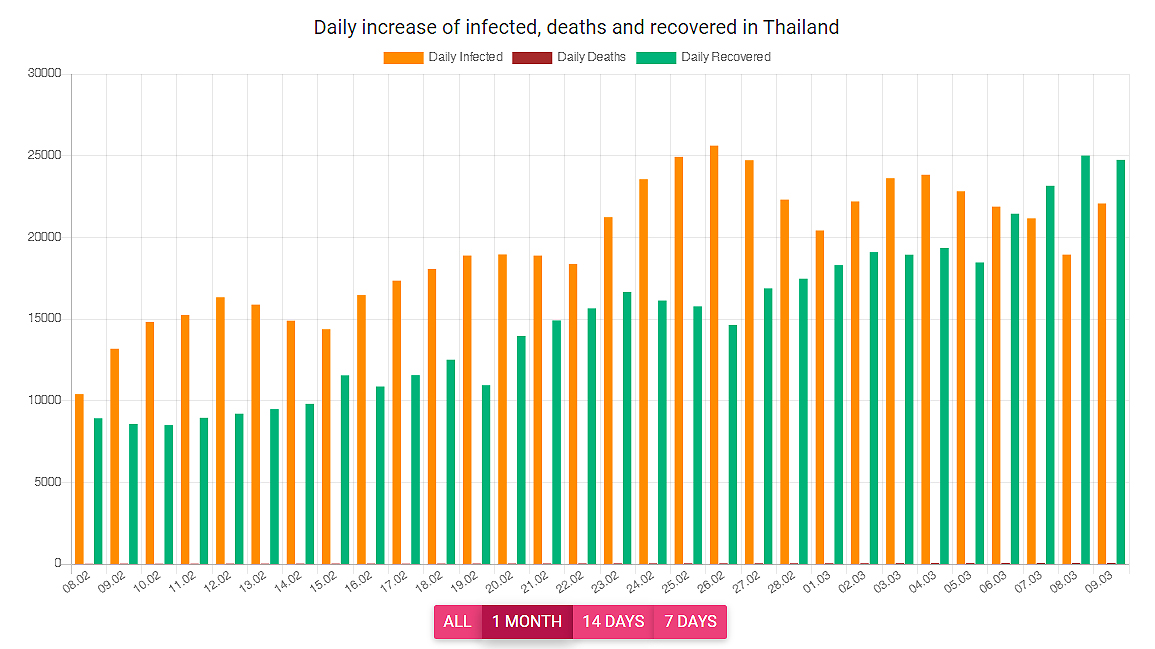 Bangkok had 15 new deaths and there were six more in adjacent provinces - in Samut Sakhon (3), Samut Prakan (2) and Nakhon Pathom (1).

Other central plain provinces further from the capital recorded 22 more deaths - five in Chon Buri, three each in Prachuap Khiri Khan and Lop Buri, two each in Kanchanaburi and Trat and one each in Chachoengsao, Prachin Buri, Samut Songkhram, Ayutthaya, Sa Kaeo, Sing Buri and Suphan Buri.

The Northeast had five new fatalities - two in Khon Kaen and once each in Nakhon Ratchasima, Buri Ram and Si Sa Ket.

The South reported 17 deaths - three each in Krabi, Phuket and Chumphon, two each in Trang and Pattani and one each in Narathiwat, Phangnga, Satun and Surat Thani.

There were 21,830 new cases in the general population, 151 among prison inmates and 92 imported cases.

Of the local Covid-19 infections, 21,653 were confirmed at hospitals and 177 via mass testing.

The 92 imported cases were from 24 countries and included 21 from Cambodia, 14 from Germany, 12 from Myanmar, nine from the United Kingdom and five each from Indonesia and France.

The 24-hour period also saw 24,747 Covid-19 patients discharged from hospitals after recovering from the coronavirus.

The death toll stood at 23,438 since the beginning of the pandemic, including 1,740 so far this year.