People seek Covid-19 vaccination on a walk-in basis at Bang Sue Grand Station in Bangkok on Wednesday. The Central Vaccination Centre at the station is ramping up vaccinations in the build-up to the Songkran festival in the middle of next month. (Photo: Pornprom Satrabhaya)

The country registered 74 more Covid-19 fatalities during the previous 24 hours, a record high in the latest wave but a fraction of the historical peak of 312, the Public Health Ministry announced on Thursday morning.

The 22,984 new cases marked the third consecutive day of rising new infections, up from the 22,073 announced Wednesday, while deaths increased by five.

Thursday's figures did not include 49,494 positive results from antigen tests over the past 24 hours. If they were included, daily infections would total 72,478.

Sumanee Wacharasin, hazard communications director of the Department of Disease Control, said the number of new fatalities exceeded predictions and officials would try to find out why.

However, the spike in fatalities came two weeks after infections hit new records, appearing to follow the pattern observed throughout the pandemic. 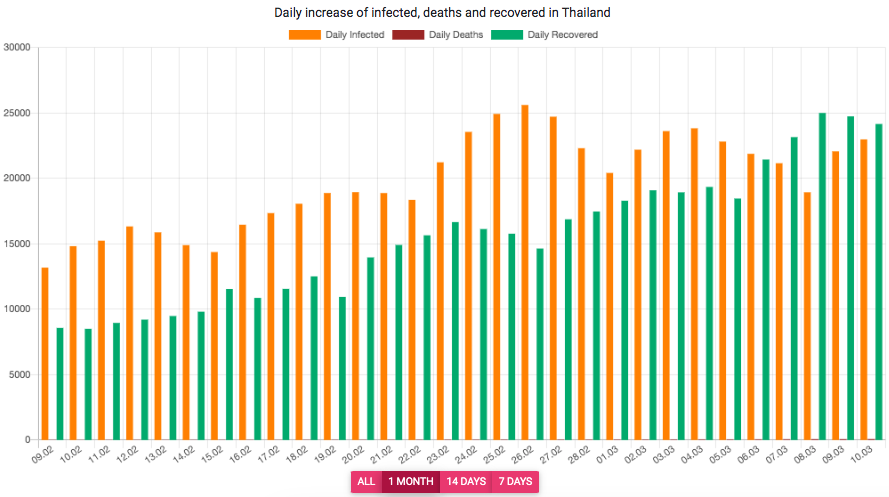 The fatality rate in the latest wave of Covid-19 is currently 0.20%, Dr Sumanee said.

The 74 new fatalities were between the ages of 26 and 97 years old and included a Myanmar and a Swedish national.

Eighty-eight percent of new fatalities had underlying illnesses, she said.

Bangkok had 12 new deaths while there were 10 more fatalities in adjacent provinces - in Samut Sakhon (4), Pathum Thani (3), Nakhon Pathom (2) and Samut Prakan (1).

Other central plain provinces further from the capital recorded 12 more deaths - three each in Chon Buri and Lop Buri and one each in Ayutthaya, Rayong, Ratchaburi, Kanchanaburi, Suphan Buri and Ang Thong.

The Northeast had 12 new fatalities - three in Buri Ram, two each in Yasothon and Udon Thani and one each in Si Sa Ket, Loei, Nakhon Phanom, Surin and Ubon Ratchathani.

The South reported 20 more deaths - six in Nakhon Si Thammarat, four in Phatthalung, three in Phuket, two in Surat Thani and one each in Chumphon, Trang, Yala, Songkhla and Satun.

The North saw eight new fatalities - three in Phrae, two in Tak and one each in Chiang Mai, Nakhon Sawan and Uttaradit. 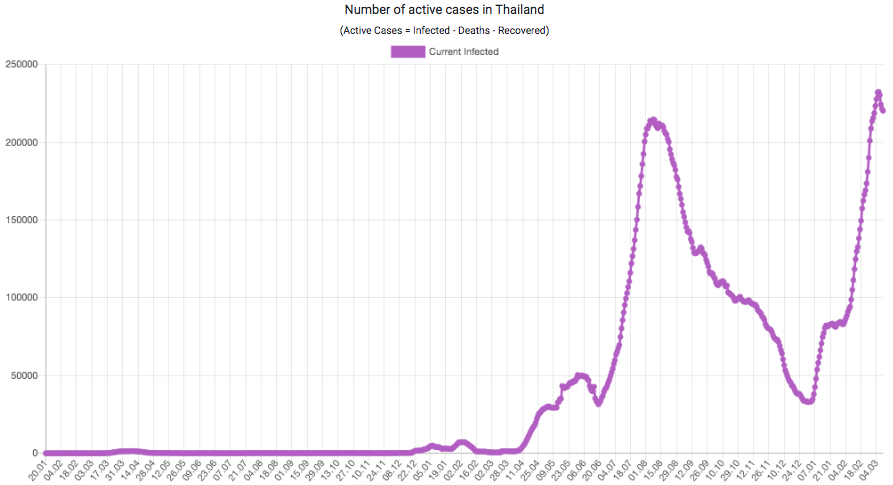 Only 47 of the 22,984 new cases announced on Thursday were found in arrivals from other countries. The rest were all locally transmitted, including 52 among prison inmates.

Of the local Covid-19 infections, 22,722 were confirmed at hospitals and 163 via mass testing.

The 24-hour period also saw 24,161 Covid-19 patients discharged from hospitals after recovering from the coronavirus.

The accumulated death toll stood at 23,512 since the beginning of the pandemic, including 1,814 so far this year.

Over the past seven days, South Korea had the most cases of 1.72 million, followed by Germany with 1.16 million cases, Vietnam with 1.02 million cases and Russia with 547,245 cases.