National police chief Pol Gen Suwat Jangyodsuk, right, leads officers in a search near Khao Nui in Rattaphum district of Songkhla on Saturday, seeking three suspects in a Phatthalung shootout in which a police officer and a drug suspect were shot dead. (Photo supplied: Wassayos Ngamkham)

SONGKHLA: More than 100 police officers were deployed to search areas around a mountain in Rattaphum district on Saturday as the hunt for three suspects wanted in connection with a fatal shootout in Phatthalung intensified.

National police chief Pol Pol Gen Suwat Jangyodsuk travelled from Bangkok to lead the operation because one of those slain in the gunfight was a police officer. He was joined by his deputy, Pol Gen Suchart Theerasawat, and Pol Lt Gen Jirabhop Bhuridej, commissioner of the Central Investigation Bureau.

Police from special operations units have focused their search on the area around Khao Nui in tambon Khao Phra of Rattaphum district.

The shooting took place at the Ban Tha Nang Phrom intersection in tambon Khok Muang of Khao Chaison district in Phatthalung on Wednesday when officers tried to arrest members of an alleged narcotics gang led by Mr Jamras.

A car chase and a gunfight ensued, in which Pol Snr Sgt Maj Anan Meesaeng was shot dead and Pol Snr Sgt Maj Chatchai Phantha-ou was wounded. One of the suspects, Watchara Ratanasuwan, 47, was also killed.

On Saturday officers searched rubber and oil palm plantations around Khao Nui. A helicopter also flew over the mountain and nearby Khao Noi but no traces of the suspects were found.

They also searched a two-storey wooden house in tambon Khao Phra after receiving information that Mr Jamras was in hiding. The house was located in a rubber plantation covering almost 100 rai.

Only elderly women and children were found inside the house. Pol Gen Suwat questioned them and a caretaker, but they insisted that they had not seen Mr Jamras, said a police source. 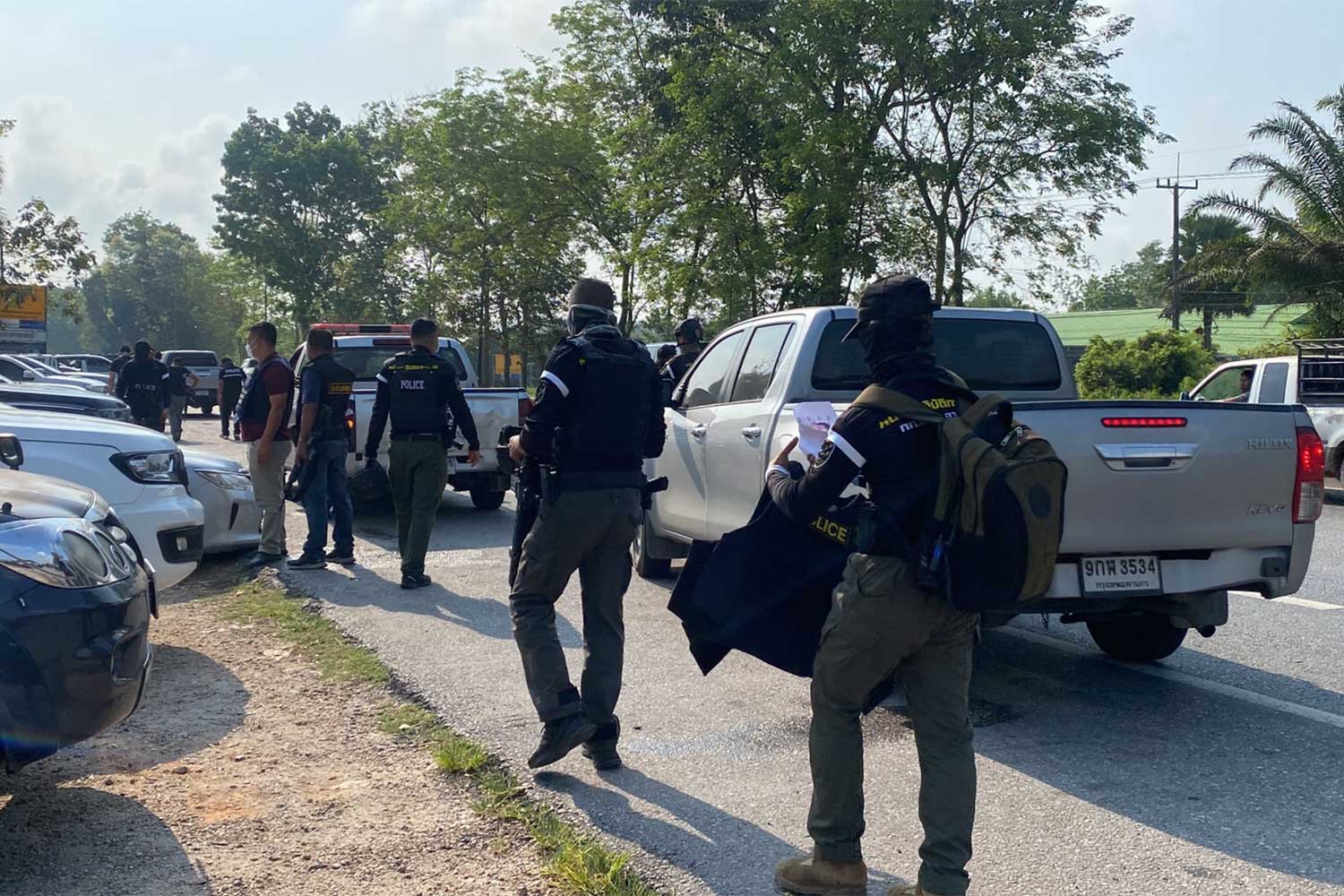 Police are deployed to hunt down the suspects in Rattaphum district of Songkhla. (Photo: Assawin Pakkawan)