Buffets for jumbos on Elephant Day

Elephants enjoy a buffet of fruit and vegetables during Elephant Day celebrations at Nong Nooch Tropical Garden near Pattaya in Sattahip district of Chon Buri province on Sunday. (Reuters photo)

Elephants at two homes in Surin and Chon Buri provinces were given a special treat on Sunday as the country celebrated Elephant Day, designated to raise awareness of the animal.

The elephant village in Tha Tum district of Surin threw a fruit banquet for about 300 elephants and held a merit-making ceremony to honour late elephants and mahouts.

The village is home to the most elephants in the country and an attraction for visitors to the northeastern province.

The Surin deputy governor said the event was held to signify the importance of the elephants and hoped that it would remind people of the need to help conserve the iconic animals.

Elephants are a source of national pride and cultural identity for Thailand and have been used for labour, transport, and battlefield triumphs by warriors and kings. 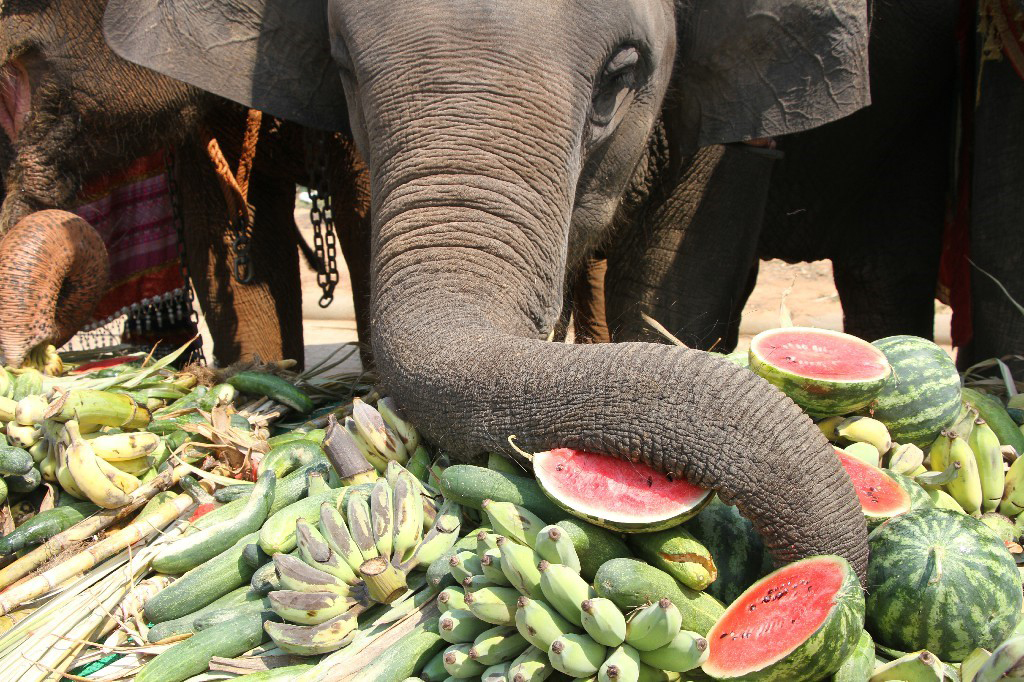 Elephants eat a variety of fruit at the elephant village in Tha Tum district of Surin province on Sunday. (Photo: Nopparat Kingkaew)

They were treated to two tonnes of fruits and vegetables laid out on an eight metre wide table.

With the absence of foreign tourists for a long time, the buffet and some visitors brought some joy to the heavyweights.

"Of course, they get bored because they get used to being with people. That's why you see our elephants are very friendly to everyone," said Kampon Tansacha, president of the garden.

"People enjoy seeing elephants, give them food, especially bananas that they like and they all look healthy and happy".

Animal rights groups have long been calling for elephant camps in Thailand to end animal shows and rides, branding the shows as a form of animal abuse.