Police give details of the arrest of three members of a gang selling fake Covid-19 test results and other forged official documents, at a media briefing at the Crime Suppression Division office on Wednesday. (Photo: Wassayos Ngamkham)

Three people have been arrested for selling fake Covid-19 test results, education certificates and other documents to people wanting to travel or apply for jobs.

Police allege the three suspects, two men and a woman, are part of a large network.

Phloi Techaphan, 24, the woman, Veeraphol “Matoom’’ Promsaensod, 26, and Munee ‘’Nid’’ Bueraheng, 22,  were detained during raids in Bangkok and Phuket by police executing  arrest warrants issued by the Criminal Court.

The charges against them include colluding in using fake documents, misleading people to believe they were specialists in fields of medical technology and colluding in providing or offering services through use of fake documents.

Details were released by police and health officials at a media briefing on Wednesday.

Pol Col Thanakorn Lerdporncharoen, deputy commander of the Consumer Protection Division (CPD), said his agency acted on complaints from the Department of Health Service Support about people selling fake Covid-19 test results to job seekers and people wanting to travel abroad who did not want to go through coronavirus testing.

Investigators focused on a website, https://covid-lab.airsite.co, which offered to provide Covid-19 testing documents for 890 baht. Customers could get the documents within an hour without the need for Covid-19 testing.

An officer posing as a customer contacted the website via the given Line app address, PCR TEST 890.  He was required to give a name, birthdate and a date to put on the lab test result.

Investigators said the test result was fake and took 15 minutes. The result bore the name PCT Laboratory Service Co, but that firm denied issuing the document and subsequently filed a police complaint against those involved, Pol Col Thanakorn said.

During questioning, Ms Phloi denied any involvement, but the two men allegedly admitted to having falsified documents, according to police.

Mr Munee told police that he had had contacted a man identified only as "Pangpond" via Twitter to get a fake Covid-19 result before he travelled to Turkey in mid-2021.

Mr Munee said he later hired a company to set up a website which he then used to provide Covid-19 test documents and generate advertising. When customers contacted him, he would send their names and other details to Pangpond, who would make the fake Covid-19 documents. (continues below) 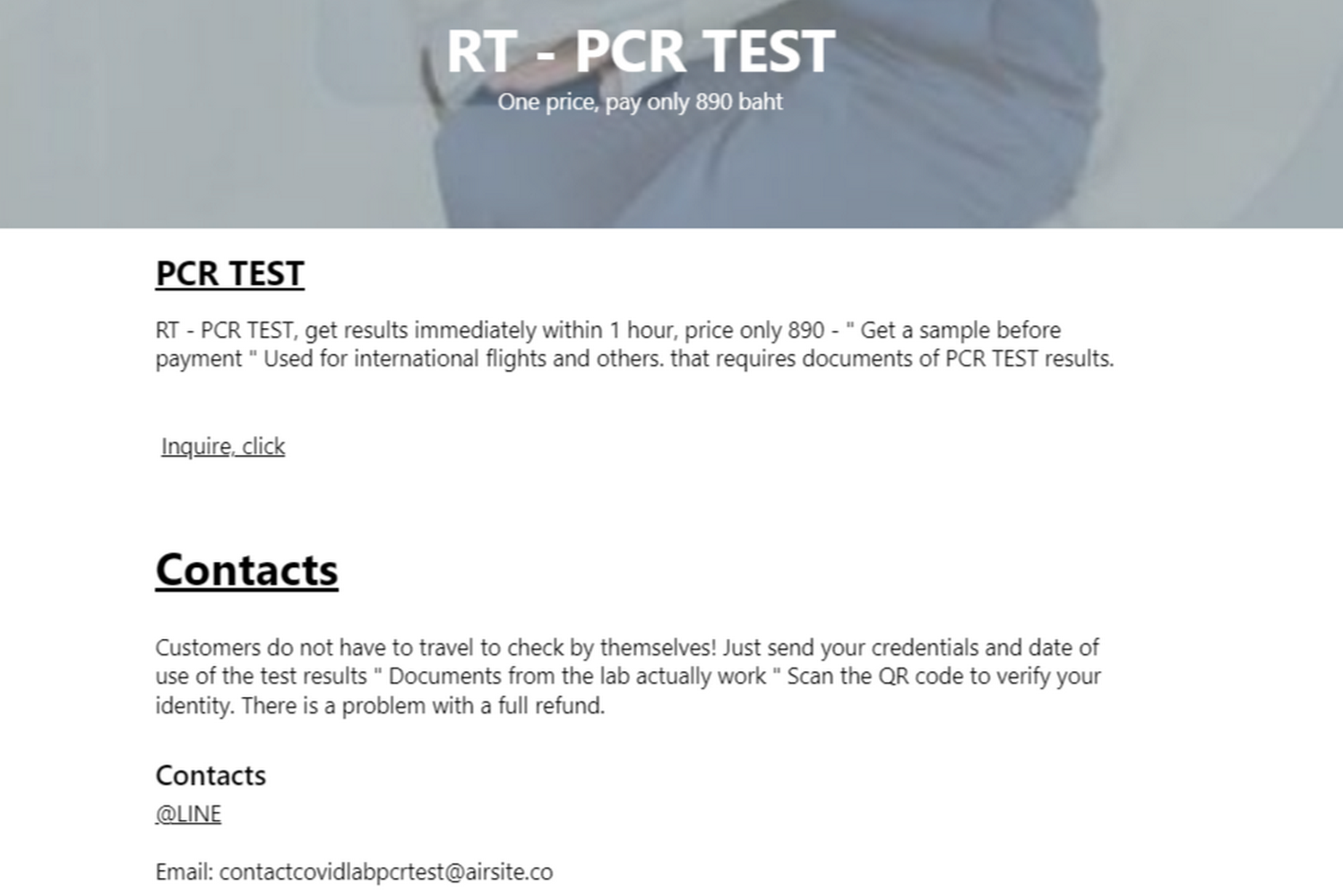 Mr Munee said that from November last year to January, his gang earned 300,000 baht from selling fake test results, according to police.

From November to January, the gang earned 5 million baht from selling those fake documents, according to police.

The trio were handed over to the CPD sub-division 4 for legal action. The investigation was being extended with the aim to arrest the mysterious "Pangpond" and any other people involved.