Thailand logged 25,456 new Covid-19 cases during the previous 24 hours, the most ever save for the 25,615 announced on Feb 26th, the Public Health Ministry announced on Thursday morning. There were 77 more fatalities, a record high in the latest wave.

Thursday's new caseload was 1,511 higher than the 23,945 new cases reported on Wednesday morning, while the death toll rose by seven.

The figures did not include 21,244 positive results from antigen tests over the past 24 hours. This would raise the total to 46,700.

Only 39 of the 25,456 new cases were detected in arrivals from other countries, with a further 54 among prison inmates. The rest were local transmissions in the general population - 24,889 confirmed at hospitals and 474 via mass testing.

The 39 imported cases came from 15 countries and included five each from Myanmar, Germany and the United Kingdom, four each from Russia and France and three each from Israel and Cambodia.

On Wednesday, 22,217 Covid-19 patients were discharged from hospitals after recovering from the coronavirus while 225,134 others were receiving treatment (up from 221,972 on the previous day). 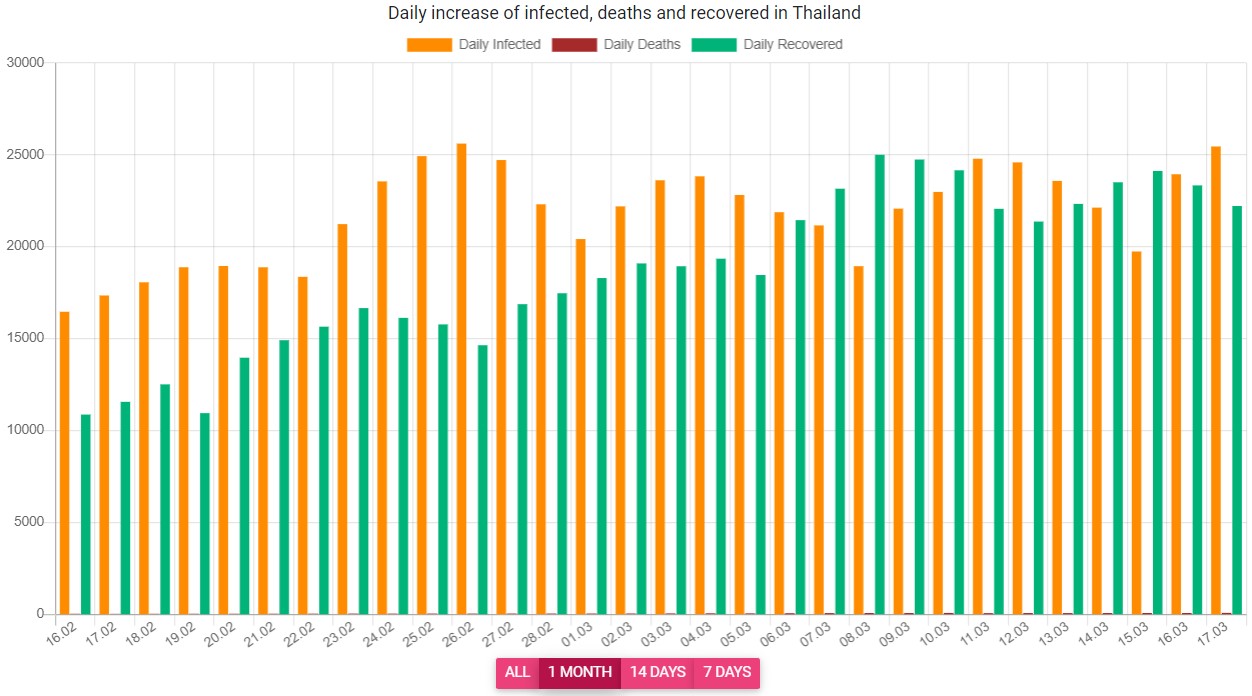 The 77 new fatalities were between the ages of 49 and 98 years old.

Bangkok had 19 new deaths while another 10 were reported in the adjacent provinces of Pathum Thani (4), Samut Prakan (4), Samut Songkhram (1) and Samut Sakhon (1).

Other central plain provinces further from the capital recorded 13 deaths - three each in Chon Buri and Lop Buri, two each in Kanchanaburi and Nakhon Sawan and one each in Prachin Buri, Rayong and Saraburi.

The Northeast had 12 fatalities - three each in Nakhon Ratchasima and Maha Sarakham, two in Udon Thani and one each in Nakhon Phanom, Bung Kan, Sakon Nakhon and Nong Bua Lam Phu.

The South reported 15 deaths - three in Surat Thani, two each in Krabi, Narathiwat, Phatthalung and Yala, and one each in Chumphon, Trang, Nakhon Si Thammarat and Pattani.

The accumulated death toll stood at 23,995 since the beginning of the pandemic, including 2,297 so far this year. 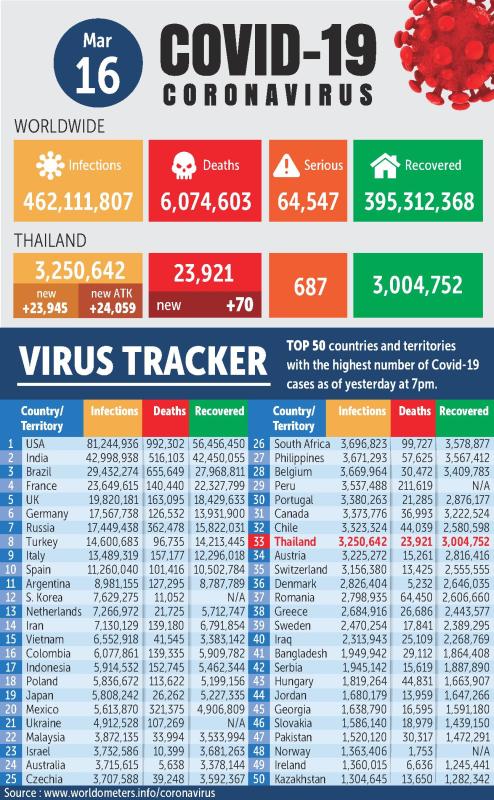