There are no Thai citizens in Ukraine serving as military volunteers in the fight against invading Russian troops, a senior Ukrainian diplomat said on Friday.

Chargé d'affaires Oleksandr Lysak was responding at a press conference on Friday to previous reports of Thais responding to President Volodymyr Zelensky's call for  "international brigade" to help defend his country against Russian forces.

Mr Lysak said there were no Thai volunteers in Ukraine serving with the military.

"I would like to thank the Royal Thai Government and Thai people for their significant and substantial support for Ukraine,” he said.

The embassy had received about 7 million baht in donations from Thai people. It  would be spent on humanitarian aid in his war-ravaged country. Five million baht had already been transferred to the national bank of Ukraine, he said.

Mr Lysak declined to comment on Prime Minister Prayut Chan-o-cha's statement that Thailand will maintain its neutrality in the Russian war on Ukraine.

He also declined to explain why the embassy was told to remove the national flag of Thailand that was on display prior to the press conference starting.

He said more than 3,000 Ukrainians were in Thailand and could not return to their country at this time due to flight cancellations, with most airports in Ukraine having been destroyed. Some people had also travelled from Ukraine to seek shelter in Thailand.

The Ukrainians coming to Thailand should be called temporarily displaced persons, not refugees, he said.

All people understood that this war was not in the interests of the Russian people. It was initiated by Russian President Vladimir Putin, he said.

"They (Russians) tell us that we're like family, but if you're killing us, how can you ask us to be your friend?" he concluded.

On Tuesday, Russian ambassador Evgeny Tomikhin insisted Russia was not pursuing all-out war and that its forces were only targeting military infrastructure while making every effort to avoid civilian casualties.

"We would like to see a peaceful, friendly Ukraine, not a Nato springboard against Russia," Mr Tomikhin said.

That has not been born out by news reports from ground in Ukraine.

On Wednesday, the Ukrainian chargé d'affaires said, "Whatever the Russian authorities say, the Russian troops continue to attack Ukraine."

According to the World Health Organization, as of March 14  1,761 civilian casualties had been confirmed, including 636 deaths (46 children) and 1,125 injured (62 children), but the real toll is likely higher.

Up to March 15, about 3 million people had left Ukraine, fleeing the continuing onslaught. 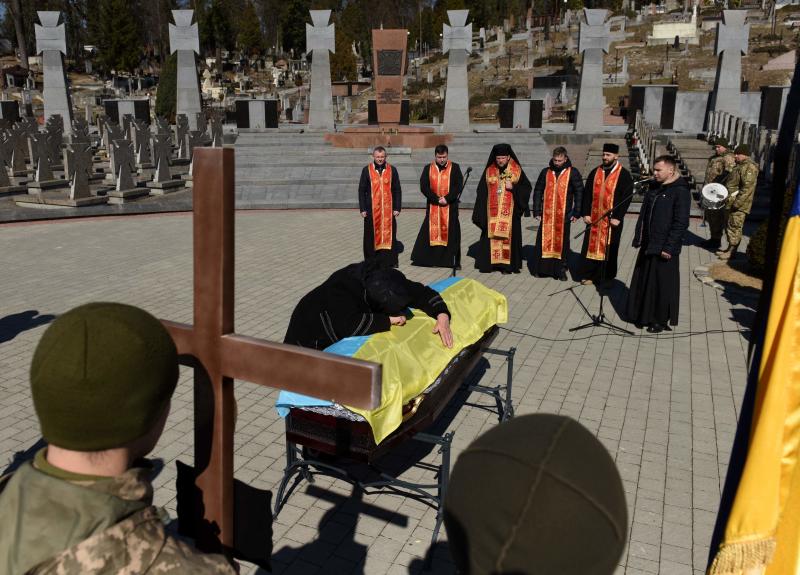 The mother of major Ivan Skrypnyk, who was killed during Russia's invasion of Ukraine, mourns over his flag-draped coffin at Lychakiv cemetery in the western Ukrainian city of Lviv on Thursday. (Photo: AFP)