New Covid cases back below 25,000, deaths at 84
Thailand
General

Daily Covid-19 cases fell for the third successive day from the peak of 27,071 on Friday and were back below 25,000, the Public Health Ministry announced on Sunday morning.

The youngest fatality was only one year old, while the oldest was 98. Two Myanmar nationals and one Kuwaiti were among those died of the virus on Saturday.

Bangkok continued to log the most new deaths -- 14 -- while a further five were reported in Samut Prakan and Nakhon Si Thammarat. The remaining fatalities occurred in 37 other provinces across the country.

Only 31 of the 24,996 new cases were found in arrivals from other countries. The remainder were all transmissions inside Thailand.

The imported cases came from 14 countries led by seven air travellers -- one of them Thai – who flew in from Germany and five arrivals from France. 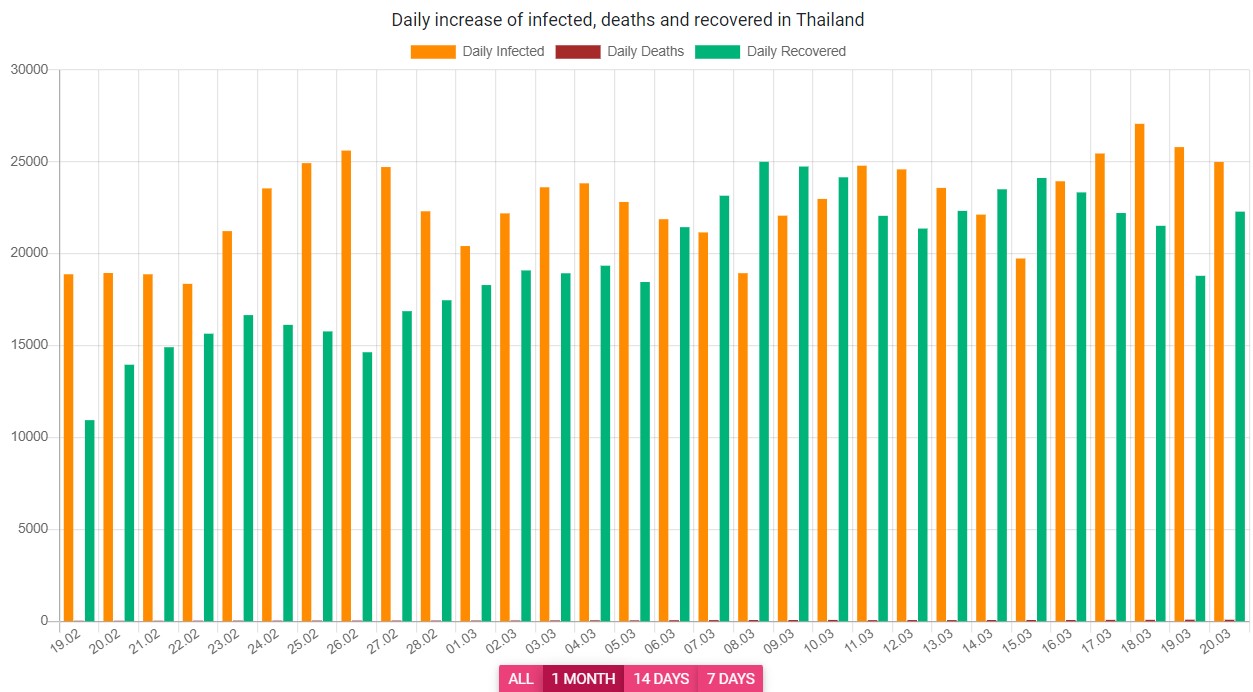 A nationwide campaign to vaccinate the elderly with a booster shot before Songkran is advancing slowly.

Figures from the Centre for Covid-19 Situation Administration (CCSA) on Sunday afternoon showed 4.2 million out of 12.7 million people aged 60 and above – about 33% - have so far received a third jab.

On March 10, the CCSA announced a campaign from Monday (March 21) to the end of the month to administer a booster shot to at least 70% of seniors. The vaccination rate for this demographic advanced only two percentage points from March 10 through Sunday.

Health officials are concerned about more fatalities among seniors after home visits by their families to celebrate the traditional New Year festival starting on April 13.

People aged 60 or older comprised 82% of the deaths reported on Sunday.

On Saturday, 22,292 Covid-19 patients were discharged from hospitals after recovering from the coronavirus, while 240,139 people received treatment at hospitals --  including 1,432 seriously ill patients and 521 dependent on ventilators.

The accumulated death toll stood at 24,246 since the beginning of the pandemic.

Thailand ranked 16th globally. The country with the most new infections is now South Korea, which logged 2.8 million cases over the last week alone.