Paetongtarn Shinawatra, the youngest daughter of former prime minister Thaksin Shinawatra, yesterday vowed to lead the opposition Pheu Thai Party to a landslide victory in the next general election.

However, she quickly denied this meant she had been confirmed as the party's candidate at the next poll.

She was speaking before a gathering of Pheu Thai key figures and party members at a party event on Sunday in Udon Thani in the Northeast, one of the party's main political strongholds.

Her remark came amid buzz that a snap election is on the horizon.

"We'd like as many people as possible to apply for party membership and fight to achieve our goal in the next election, winning a landslide victory," said Ms Paetongtarn, who serves as Pheu Thai Party's chief adviser on participation and innovation. 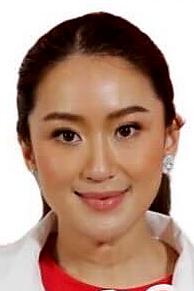 "It's now time to fight again in a new race and we are aiming to recruit as many as 14 million people like we used to have in the past," she said, referring to the 14 million members of the now-defunct Thai Rak Thai Party, one of the party's antecedents.

However, in an interview later after her speech, Ms Paetongtarn avoided saying whether she will definitely become Pheu Thai's prime ministerial candidate at the election.

She said the event was actually intended for her to declare herself as the leader of what she termed the "Pheu Thai family".

She also added the decision whether she will be the party's prime ministerial candidate is not hers alone to make, as she works as part of a team.

"Whether I will become the prime ministerial candidate will be known after parliament is dissolved," she said.

Referring to the present government as a dictatorship, she said the best way forward is to restore democracy. The next government, she said, must come from a free and fair election.

Asked how many seats the party expects to win, Ms Paetongtarn said she still had no idea, but the more the better.

And when asked about her father's oft-stated wish to soon return to Thailand, she said he wants to come home to be with his grandchildren, not to get involved with the Pheu Thai Party as some believe.

Thaksin has been living in self-imposed exile while facing a number of misconduct and corruption cases, some of which have already led to a prison sentence handed down to him in his absence.

In the past election, Pheu Thai actually won with 237 MPs but its victory was "stolen" with the help of a constitution written with the aim of getting rid of party, says party and opposition leader Cholnan Srikaew.

He was confident Pheu Thai would gain support from voters and its membership would soon reach 15 million.

"We're proud to announce that the leader of the Pheu Thai family is the blood and DNA of the person who is determined to build up the nation on behalf of Thai Rak Thai," he said in introductory remarks at the event.

Thai Rak Thai under Thaksin's leadership won the 2001 general election with a majority of 248 seats in parliament, and Thaksin became the prime minister.

Sutin Klungsang, chief opposition whip and deputy leader of Pheu Thai, said that four years after that, Thaksin led Thai Rak Thai in a new election and won a landslide victory with 377 seats.

The Thaksin administration was ousted by a military coup on Sept 19, 2006 and the party dissolved on May 30, 2007. Despite that, the party is once again rekindling hope it can storm the polls and help voters cope with bread-and-butter issues.