People wait for their turn to be vaccinated at a mobile vaccination unit in the Rama VIII Bridge area on Monday. City Hall has dispatched the units under the so-called BMV Night programme to offer Covid-19 vaccine jabs to up to 400 people a day during the evening on a first-come-first-served basis. (Photo: Wichan Charoenkiatpakul)

The new caseload declined for the fourth consecutive day from Friday's all-time high of 27,071, and was 2,059 lower than the 23,441 cases reported on Monday morning.

However, the figures did not include 13,220 positive results from antigen tests over the previous 24 hours. This would raise the total to 34,544.

All but 58 of the 21,382 new infections were transmitted inside Thailand, Forty-four of the new domestic cases were prisoners, and 109 were detected via mass testing; all the others were diagnosed at hospitals.

The 58 imported cases came from 20 countries and included 11 from the United Kingdom, eight from Cambodia, six each from Singapore and Germany, four from Malaysia and three each from Iran and Myanmar. 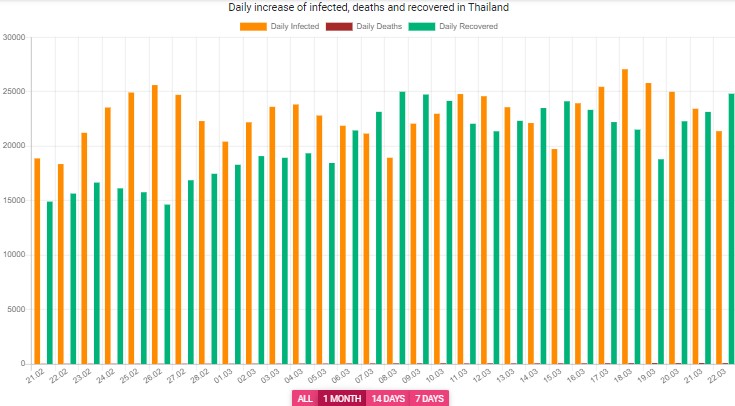 The 83 new fatalities were between the ages of 3 and 95 years old and included one Japanese.

Bangkok had 11 new deaths while there were four in adjacent provinces - in Nakhon Pathom (1), Samut Prakan (1), and Pathum Thani (2).

Other central plain provinces further from the capital recorded 16 deaths - three each in Rayong and Lop Buri, two in Chon Buri and one each in Samut Songkhram, Ang Thong, Chai Nat, Chanthaburi, Trat, Kanchanaburi, Ratchaburi and Phetchaburi.

The South reported 21 deaths - four each in Surat Thani and Phatthalung, three each in Phuket and Pattani and one each in Chumphon, Krabi, Nakhon Si Thammarat, Trang, Songkhla, Yala and Narathiwat.

The North saw nine more coronavirus-related fatalities - three in Phitsanulok, two in Phetchabun and one each in Tak, Lampang, Chiang Mai and Uttaradit.

The accumulated death toll stood at 24,417 since the beginning of the pandemic, including 2,719 so far this year. 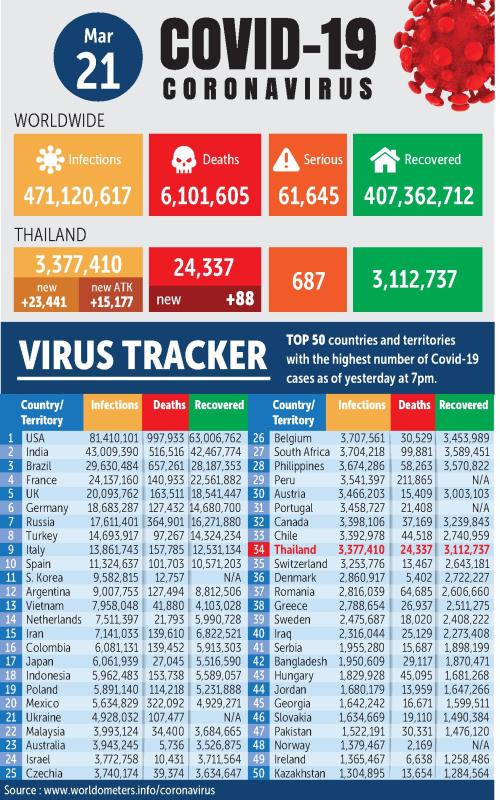