People wait for their turn to be vaccinated against Covid-19 in the Rama VIII Bridge area, Bangkok, on Monday. (Photo: Wichan Charoenkiatpakul)

Daily confirmed Covid-19 cases hit 27,024, a 24-hour increase of 1,860 and just 47 below the all-time high set on March 18, the Public Health Ministry announced on Thursday morning.

The figures did not include 26,768 positive results from antigen tests over the previous 24 hours. This would raise the total to 53,792.

Coronavirus-related fatalities rose by two to 82.

Just 46 of the new infections were detected in new arrivals from other countries, with the rest transmitted inside Thailand's borders, including 54 among prison inmates.

Of the new infections in the general population, 26,740 were confirmed at hospitals and 184 via mass testing.

“Officials are concerned about clusters among medical personnel including those at Siriraj, Bangkok Christian and Praram 9 hospitals. Meanwhile, clusters are shrinking noticeably at schools and factories,” Dr Apisamai said.

The 46 imported cases came from 14 countries and included 17 from Cambodia, six from the United Kingdom, five from France and three each from Switzerland and Germany. 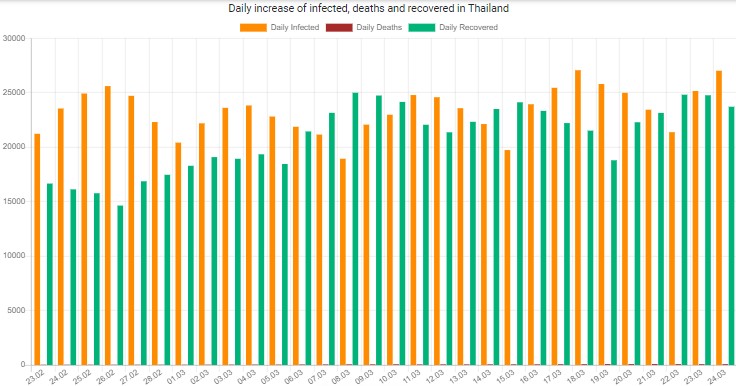 The 82 new fatalities were between the ages of one month and 95, and included one Briton and five Myanmar nationals.

“Of the 82 fatalities, as many as 46 had not received even the first vaccine shot. Six others got their first jab just before becoming infected, and developed severe symptoms. Sixteen received two shots but no booster. Six others just had their third and booster shot,” said Apisamai Srirangson, spokeswoman for the Centre for Covid-19 Situation Administration, in the afternoon briefing.

Bangkok had four new deaths while there were five in adjacent provinces - in Pathum Thani (3), Samut Prakan (1) and Nakhon Pathom (1).

Other central plain provinces further from the capital recorded 28 deaths - four in Kanchanaburi, three each in Chon Buri, Ayutthaya and Lop Buri, two each in Phetchaburi, Prachuap Khiri Khan, Ratchaburi and Trat, and one each in Saraburi, Ang Thong, Samut Songkhram, Suphan Buri, Chachoengsao, Prachin Buri and Rayong.

The Northeast had 21 fatalities - five in Si Sa Ket, four in Khon Kaen, three in Kalasin, two in Surin and Udon Thani and one each in Yasothon, Ubon Ratchathani, Nong Bua Lam Phu, Sakon Nakhon and Chaiyaphum.

The South reported 21 deaths - five in Surat Thani, three each in Krabi, Pattani and Nakhon Si Thammarat, two each in Phuket, Songkhla and Satun and one in Trang.

On Wednesday, 23,721 Covid-19 patients were discharged from hospitals after recovering from the coronavirus while 240,349 others were receiving treatment (up from 237,128 on the previous day).

The accumulated death toll stood at 24,579 since the beginning of the pandemic, including 2,881 so far this year.

Over the past seven days, South Korea had the most cases of 2.79 million, followed by Germany with 1.59 million cases, Vietnam with 1.07 million cases and France with 729,229 cases. 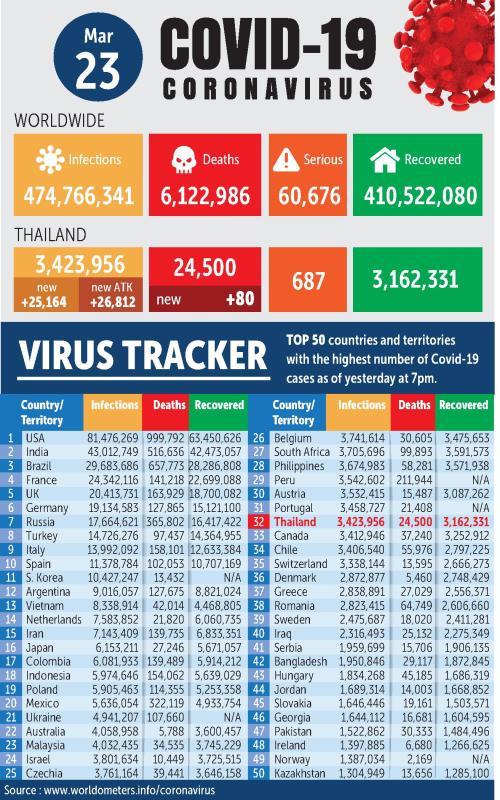