New Covid cases leap back up to 25,389, deaths rise to 87
Thailand
General

After three days of declines, daily Covid-19 cases shot back up to 25,389, the Public Health Ministry reported on Wednesday. Coronavirus-related deaths in the previous 24 hours rose nine to 87.

This compared with the 78 coronavirus-related fatalities and 21,678 new cases reported on Tuesday.

The 87 new fatalities were between the ages of seven months and 102 years old and included two Chinese and one Myanmar.

Bangkok had seven more deaths and there were 11 in adjacent provinces - in Samut Sakhon (5), Samut Prakan (4) and Pathum Thani (2).

Other central plain provinces further from the capital recorded 25 deaths - four in Lop Buri, three each in Chon Buri and Prachin Buri, two each in Samut Songkhram, Saraburi, Rayong, Chachoengsao and Sa Kaeo and one each in Nakhon Sawan, Sing Buri, Suphan Buri, Ratchaburi and Prachuap Khiri Khan.

The Northeast had 18 fatalities - four in Roi Et, three in Ubon Ratchathani, two each in Surin, Khon Kaen, Nong Khai and Amnat Charoen and one each in Loei, Kalasin and Sakon Nakhon.

The South reported nine deaths - three in Phatthalung, two in Songkhla and one each in Chumphon, Krabi, Yala and Pattani.

The North saw 17 more coronavirus-related fatalities - four in Sukhothai, three each in Kamphaeng Phet, Tak and Phayao, two in Phetchabun and one each in Lampang and Chiang Rai.

There were 25,298 new cases in the general population, 44 among prison inmates and 47 imported cases.

Of the new infections in the general population, 25,081 were confirmed at hospitals and 217 via mass testing.

The 24-hour period also saw 26,084 Covid-19 patients discharged from hospitals after recovering from the coronavirus.

The death toll stood at 25,045 since the beginning of the pandemic, including 3,347 so far this year. 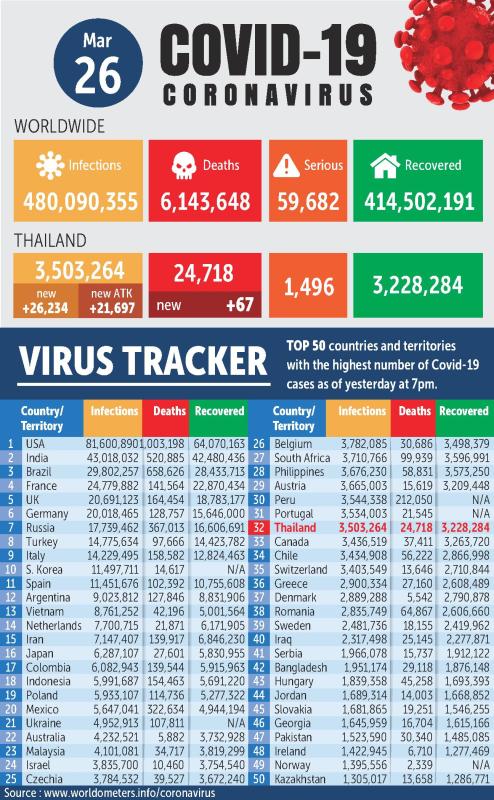