Protesters hold banners and placards during a demonstration against the surge in prices and shortage of fuel and other essential commodities in Colombo on Friday night. (AFP Photo)

COLOMBO: Troops armed with sweeping powers were deployed in Sri Lanka on Saturday with the near-bankrupt country on edge after the president declared a state of emergency to quell escalating protests against him.

Gotabaya Rajapaksa invoked special powers on Friday night, a day after hundreds of people tried to storm his house in anger over unprecedented shortages of food, fuel and medicine.

The state of emergency was for the “protection of public order and the maintenance of supplies and services essential to the life of the community”, Rajapaksa said in a proclamation.

Soldiers armed with automatic assault rifles had already been deployed for crowd control at fuel stations and elsewhere when the emergency was declared. More were seen on Saturday.

In normal times, Sri Lanka’s military can only play a supporting role to police, but the state of emergency gives them authority to act alone, including to detain civilians.

The country of 22 million people is battling severe shortages of essentials, sharp price rises and crippling power cuts in its most painful downturn since independence from Britain in 1948.

The coronavirus pandemic has torpedoed tourism and remittances, both vital to the economy, and authorities have imposed a broad import ban in an attempt to save foreign currency.

Many economists also say the crisis has been exacerbated by government mismanagement — much of it by members of the powerful Rajapaksa clan — years of accumulated borrowing, and ill-advised tax cuts.

The emergency laws came ahead of planned anti-government protests on Sunday, when activists on social media have urged people to demonstrate outside their homes.

“Do not be deterred by tear gas, very soon they will run out of dollars to restock,” said one post encouraging people to demonstrate even if police attempt to break up gatherings.

“I am watching the situation closely, and hope the coming days bring restraint from all sides, as well as much needed economic stability and relief for those suffering,” she said in a tweet.

Travel trade specialists say the state of emergency could be a new blow to hopes of a tourism revival as insurance rates usually rise when a country declares a security emergency.

A police official said authorities were considering a nationwide curfew to prevent an escalation of protests that have blocked traffic in many towns.

“There are reports of sporadic attacks on the homes of government politicians,” a security official told AFP, adding that a ruling party legislator was hit with eggs at a public event in the central district of Badulla on Friday.

A curfew imposed for a second night on Friday was relaxed at dawn Saturday.

The unrest on Thursday night outside the president’s private home saw hundreds of people demand he step down.

The crowd turned violent, setting ablaze two military buses, a police jeep and other vehicles, and threw bricks at officers.

Police arrested 53 protesters, before 21 of them were released on bail Friday night, court officials said. Others were still being detained but had yet to be charged.

Rajapaksa’s office said on Friday that the protesters wanted to create an “Arab Spring” — a reference to anti-government protests in response to corruption and economic stagnation that gripped the Middle East more than a decade ago.

Around $6.9 billion of Colombo’s debt needs to be serviced this year but its foreign currency reserves stood at about $2.3 billion at the end of February.

The country earlier this year asked China, one of its main creditors, to help put off debt payments but there has been no official response yet from Beijing.

The China-backed Hambantota International Port was promoted by former president Mahinda Rajapaksa, the elder brother of the incumbent, to spur economic development in his home district, and against the advice of critics who warned against heavy borrowing to build it. The site had few users in its first few years of operation.

Struggling to pay back over $8 billion in Chinese loans and investments, the government in 2017 handed over an 85% stake in the port complex to a Chinese state-owned company on a 99-year lease to raise $1.2 billion.

Work is now nearly complete on expanded facilities that are expected to start attracting more business later this year. 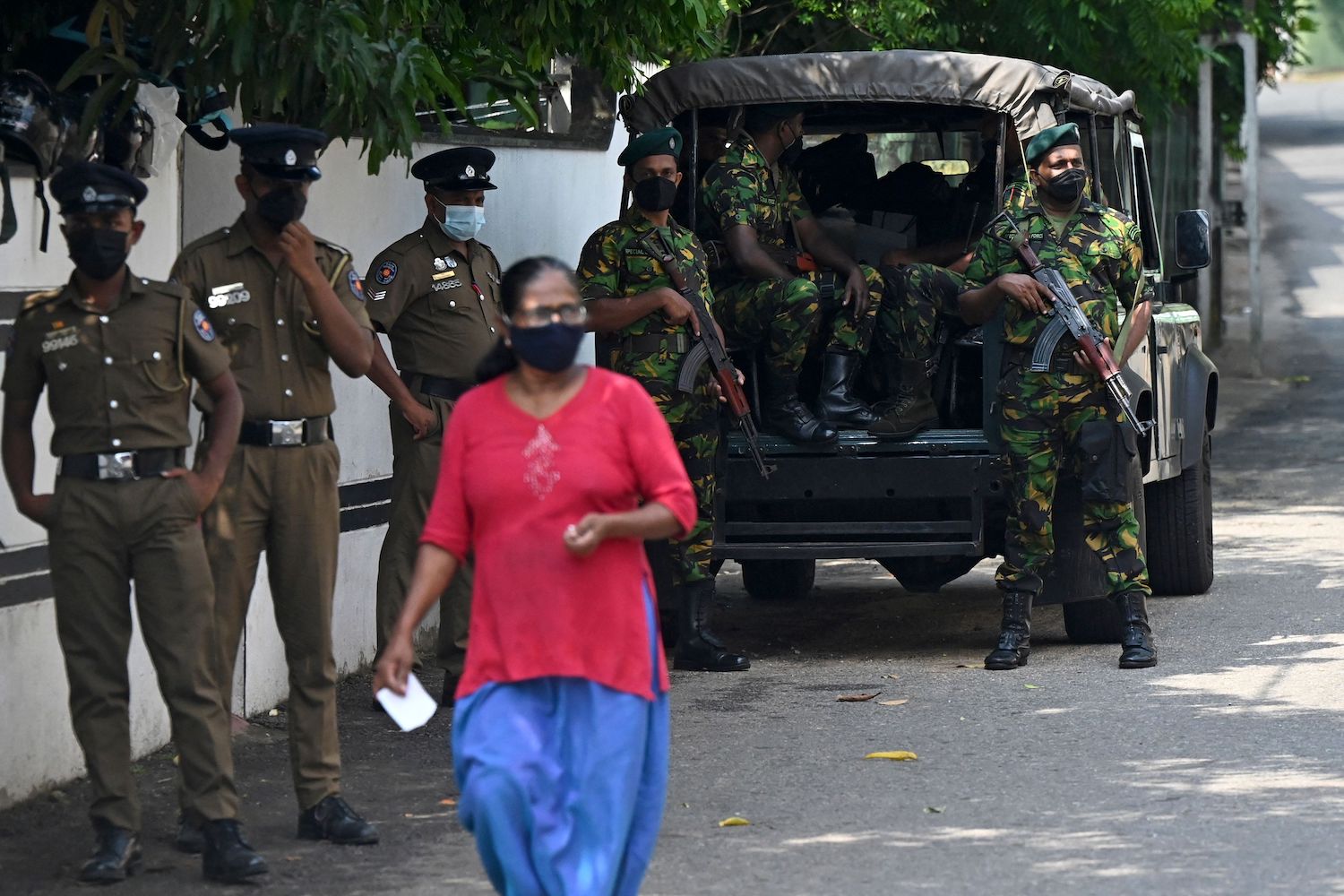 A pedestrian walks past Special Task Force and police personnel standing guard along a street in Colombo on Saturday. (AFP Photo)