Chilly rain forecast for much of the country
Thailand
General

Chilly rain forecast for much of the country

Falling temperatures, gusty winds and thunderstorms are expected in most parts of the country until Monday, the Meteorological Department warned on Sunday.

The weather service said temperatures in the northern, northeastern and central regions and Greater Bangkok would fall by 1-4°C due to a high pressure system from China that blankets the area.

Strong winds and rain were expected in areas in those three regions and some parts of the capital. Rain is also forecast for southern provinces on both the Andaman coast and the Gulf of Thailand.

Torrential rain and summer storms hit some provinces on Friday and Saturday. Muang district of Chiang Mai and Nang Rong district of Buri Ram were hit the hardest by heavy rainfall on Saturday, according to the report by the Disaster Prevention and Mitigation Department issued on Sunday. (continues below) 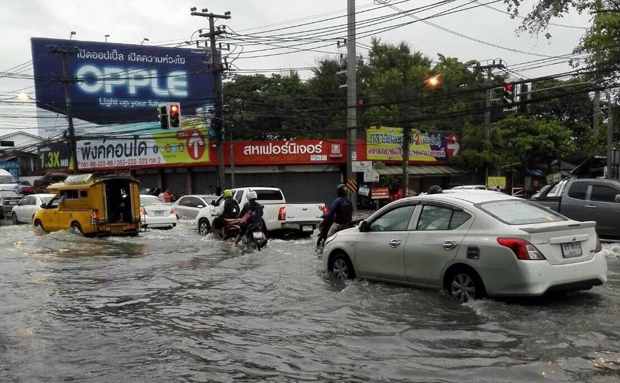 A road in Muang district of Chiang Mai is flooded after heavy rain on Saturday. (Photo: Panumet Tanraksa)

In Samut Prakan, monks were helping with repairs to Wat Kalong School in Bang Bo district after a summer storm on Friday severely damaged two buildings, with strong winds stripping away both roofs.

Phra Khru Palad Sawatsilakul on Saturday handed over coins donated by worshippers at  Wat Bang Phli Yai Klang in Bang Phli district to help the primary school fix the buildings in time for all 78 students return to classrooms for the new school year, which starts on May 15.

The abbot said the temple would continue to seek donations to cover the cost of repairs. He  did not expected state monetary assistance would arrive quickly, because of all the red tape in the bureaucracy.

Boonpetch Wanna, the director of the Primary Educational Service Area 2 Office, said all the school's electrical equipment, including computers, was damaged by the storm.

He expected only one of the two buildings could be fixed in time for the new school term.