Police and forensic officers inspect the body of a woman, 73, found dead on a fruit crop plantation in Nakhon Thai district of Phitsanulok on Tuesday. (Photo: Chinnawat Singha)

PHITSANULOK: A 73-year-old woman was found dead with knife wounds on her face on a fruit plantation in Nakhon Thai district on Tuesday morning.

The body of the elderly woman was covered with branches and banana leaves on the plantation, covering about 40 rai, at Khek Yai village in tambon Ban Yaeng when police, a doctor and rescue workers arrived at the scene after being alerted at around 10pm on Tuesday, said Pol Capt Boontham Saenrat, investigation officer at Ban Yaeng police station in Nakhon Thai.

The woman, identified as Win Aoonak, 73, had multiple knife wounds to her face and her forehead. Her left eye had been hit by a hard object, said police.

Her empty wallet and a farm knife were found nearby. Rescue workers later took her body to Buddhachinaraj Hospital for a post-mortem examination.

According to the police investigation, Mrs Win had been hired to care of the fruit plantation for about 20 years. The owner was a Bangkok resident.

The elderly woman came to the plantation every day from her house, about 3 kilometres away. On Monday, she went to work there as normal, and when she did not return home in the evening, relatives went to the plantation but were unable to find her. They then sought help from local police, rescue workers and forestry officials.

Her four-wheel ATV vehicle was found overturned in a pond inside the plantation, about 200 metres away from a makeshift shelter at the plantation. However, there were no traces of her whereabouts on Monday night.

On Tuesday morning, her relatives resumed the search and found her body, covered with banana leaves and branches, about 100 metres away from the makeshift shelter. They then alerted police.

Police on Tuesday detained a worker hired to cut grass at the plantation for questioning. 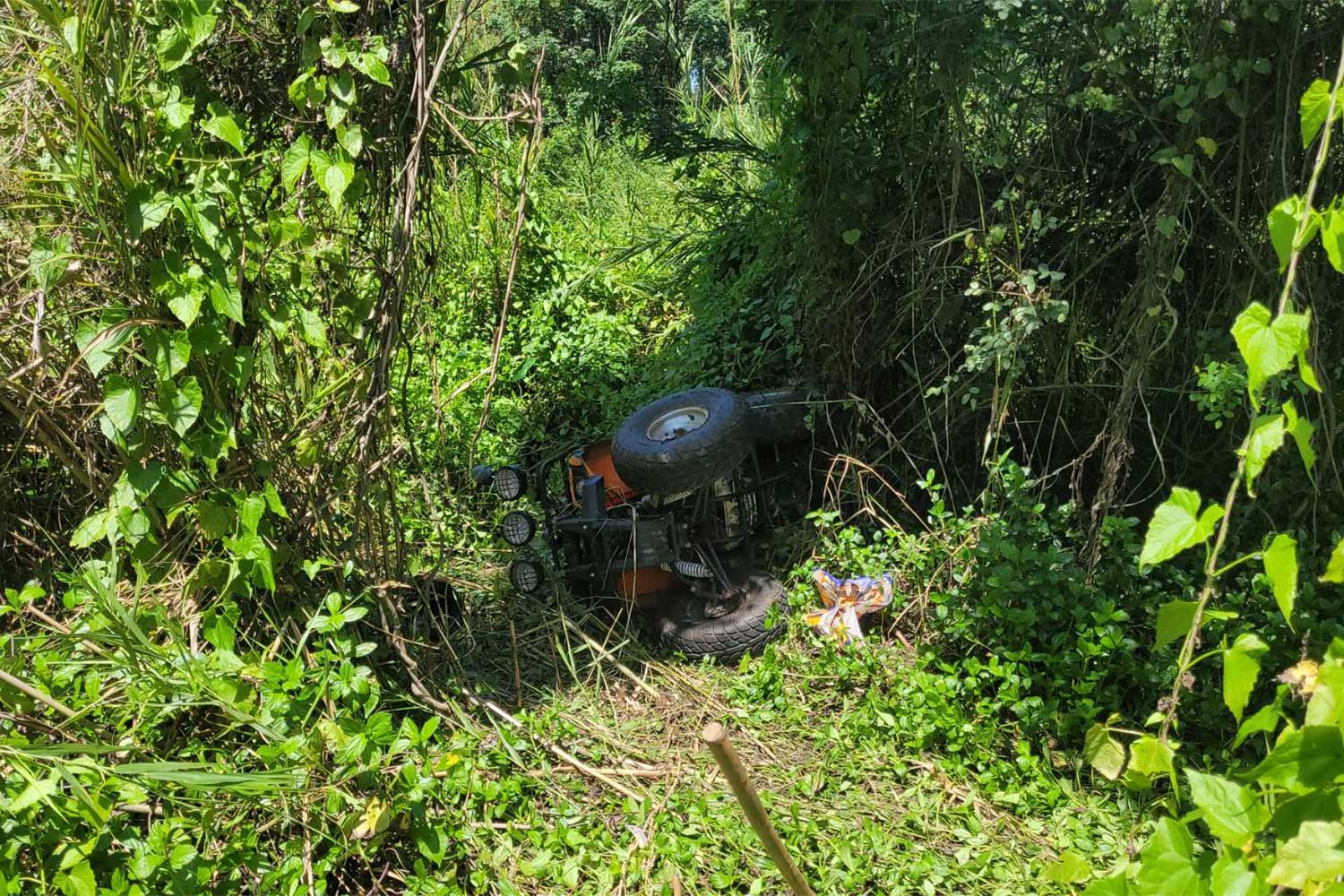 An ATV vehicle is found overturned in a pond on the fruit tree plantation where the 73-year-old woman was found dead with knife wounds to her face. (Photo: Chinnawat Singha)