People wait for buses to their home provinces ahead of the Songkran festival, at the Bangkok Bus Terminal on Friday. (Photo: Pattarapong Chatpattarasill)

Saturday’s figures did not include 22,431 positive results from antigen tests over the past 24 hours. This would raise the total to 47,729.

This compared with the 89 coronavirus-related fatalities and 25,140 new cases reported on Friday morning.

Of those in hospital, 1,936 were seriously ill patients with lung inflammation and 821 dependent on ventilators.

Of the seriously ill patients, Bangkok had the most cases at 234, followed by 83 in Samut Prakan, 80 in Nakhon Ratchasima, 60 in Chon Buri and 59 in Kanchanaburi, the Centre for Covid-19 Situation Administration (CCSA) reported on Saturday afternoon.

According to the CCSA, the 98 people who died were aged from 20 to 97 with the average age of 75. One was from Myanmar and the rest were Thais.

Bangkok logged 10 new deaths and there were seven in adjacent provinces — two each in Samut Prakan and Nakhon Pathom and one each in Pathum Thani, Samut Sakhon and Nonthaburi.

Other central plains provinces further from the capital had 38 deaths — six in Ratchaburi, four each in Kanchanaburi, Samut Songkhram and Suphan Buri, three in Chon Buri, two each in Trat, Sa Kaeo, Uthai Thani, Nakhon Sawan, Prachuap Khiri Khan and Lop Buri and one each in Phetchaburi, Sing Buri, Saraburi, Rayong and Chanthaburi.

The North reported 19 deaths — four in Phichit, three each in Chiang Mai, Tak and Kamphaeng Phet, two each in Sukhothai and Phetchabun and one each in Phrae and Mae Hong Son.

The Northeast saw 18 new fatalities — three each in Roi Et, Si Sa Ket, Nakhon Ratchasima and Ubon Ratchathani, two each in Buri Ram and Sakhon Nakhon and one each in Chaiyaphum and Maha Sarakham.

The South had six deaths — three in Songkhla and one each in Chumphon, Nakhon Si Thammarat and Trang. 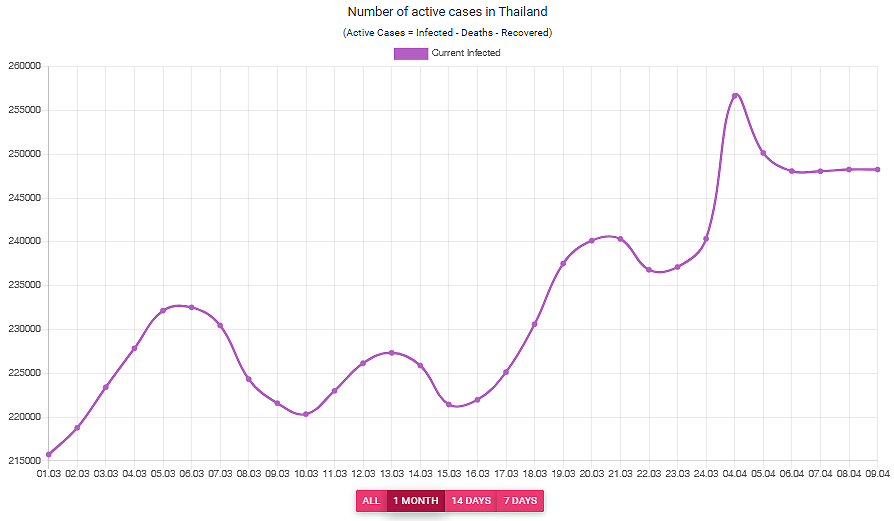 There were 25,170 new cases in the general population, 50 among prison inmates and 78 imported ones.

Of the new infections in the general population, 24,983 were confirmed at hospitals and 187 via mass testing.

The 78 imported cases came from 20 countries. They included 18 from Cambodia, 11 from the United Kingdom, eight from Australia, seven from Singapore and four each from Norway, Saudi Arabia and Malaysia.

Vaccinations continued to progress, with 130.86 million doses administered as of Friday. 80.3% of the population have now received one dose of the vaccine and 72.6% have received two shots, while 35.2% have got a booster shot.

The accumulated death toll stood at 25,975 since the beginning of the pandemic, including 4,277 so far this year.