People board an interprovincial bus on Saturday to head home for the Songkran long weekend from April 13 to 17. The government expects a Covid-19 case surge after the holiday period. (Photo: Nutthawat Wicheanbut)

The latest numbers did not include 23,199 positive results from antigen tests over the prevous 24 hours. This would raise the total to 48,338.

On Saturday, 25,509 Covid-19 patients were discharged from hospitals after recovering from the coronavirus - slightly more than the number of new infections confirmed by PCR tests.

The remainder were in hospitel facilities (65,057), in home/community isolation (121,752) or in unspecified treatment locations (676), according to the daily update posted by the Department of Disease Control.

Of those in hospital, 1,993 were seriously ill patients with lung inflammation and 848 dependent on ventilators.

Of the seriously ill patients, Bangkok had the most cases at 245, followed by 82 in Samut Prakan, 76 in Nakhon Ratchasima, 60 in Chon Buri and 55 in Kanchanaburi, the Centre for Covid-19 Situation Administration (CCSA) reported on Sunday afternoon.

Vaccinations continued to progress, with 131.15 million doses administered as of Saturday, marking at least one dose for 80.4% of the population, at least two for 72.7% and at least one booster shot for 35.2%.

According to the CCSA, the 98 people who died were aged from 20 to 97 with an average age of 75. One was from Myanmar and the rest were Thais.

Bangkok logged 17 new deaths and there were 13 in adjacent provinces — five in Pathum Thani, three each in Samut Sakhon and Samut Prakan, and two in Nakhon Pathom.

Other central plain provinces further from the capital had 26 deaths — eight in Chon Buri, four in Phetchaburi, two each in Chachoengsai, Nakhon Sawan and Saraburi, and one each in Lop Buri, Rayong, Trat, Suphan Buri and Ratchaburi.

The North reported 10 deaths — three each in Chiang Rai and Lampang, two in Chiang Mai and one each in Uttaradit and Phitsanulok.

The Northeast saw 31 new fatalities — five each in Ubon Ratchathani and Nong Khai, four each in Roi Et, Si Sa Ket and Kalasin, three in Nakhon Ratchasima, two in Udon Thani, and one each in Loei, Buri Ram, Nakhon Phanom and Nong Bua Lam Phu.

The South had 11 deaths — two each in Nakhon Si Thammarat, Phangnga and Yala and one each in Phuket, Surat Thani, Trang, Satun and Pattani. 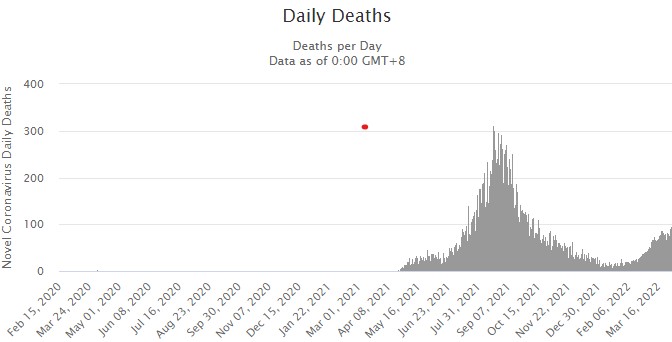 The 25,139 new infections announced on Sunday included 24,992 in the general population and 80 among prison inmates.

The remaining 67 were detected in new arrivals from other countries, including nine from Australia, seven each from Germany, France and the United Kingdom, and five each from Myanmar and Singapore.

Of the new infections in the general population, 24,746 were confirmed at hospitals and 246 via mass testing.

The accumulated death toll stood at 26,083 since the beginning of the pandemic, including 4,385 so far this year. 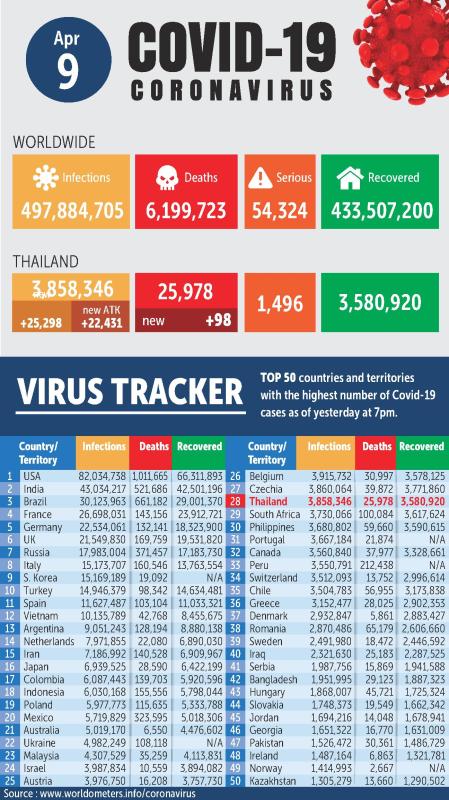