A woman uses a ladle with an extra-long handle to pour scented water on the hands of an elderly woman during a demonstration of a Covid-safe ‘rod nam dam hua’ ceremony at The Mall Ngamwongwan shopping centre on Monday. (Photo: Pattarapong Chatpattarasill)

The country registered 19,982 more Covid-19 cases in the previous 24 hours, significantly fewer than the 22,387 the day before, the Public Health Ministry announced on Tuesday morning.

Daily coronavirus-related fatalities dropped from 105 to 101.

Tuesday’s new case numbers did not include 10,977 positive results from antigen tests over the previous 24 hours. This would raise the total to 30,959.

Of those in hospital, 2,056 were seriously ill patients with lung inflammation and 885 dependent on ventilators.

Of the seriously ill patients, Bangkok had the most cases at 225, followed by 90 in Nakhon Ratchasima, 80 in Samut Prakan, 68 in Chon Buri and 63 in Suphan Buri, the CCSA reported on Tuesday afternoon.

According to the CCSA, the 101 people who died were aged from three months to 100 years old with an average age of 75. One was a British national and the rest were Thais.

Bangkok logged 11 new deaths and there were seven in adjacent provinces — two each in Samut Prakan, Samut Prakan and Nonthaburi, and one in Nakhon Pathom.

Other central plains provinces further from the capital had 28 deaths — five in Nakhon Sawan, three each in Chon Buri, Kanchanaburi and Suphan Buri, two each in Lop Buri, Saraburi, Chachoengsao and Trat, and one each in Uthai Thani, Prachuap Khiri Khan, Phetchaburi and Nakhon Nayok.

The North reported 18 deaths — six in Sukhothai, three each in Chiang Mai and Lampang, two in Phichit, and one in each of Uttaradit, Phitsanulok, Tak and Mae Hong Son.

The Northeast saw 28 new fatalities — five each in Nakhon Ratchasima and Ubon Ratchathani, three each in Kalasin, Surin and Khon Kaen, two each in Bung Kan and Nakhon Phanom, and one each in Buri Ram, Nong Bua Lam Phu, Si Sa Ket, Roi Et and Mukdahan.

The South had nine deaths — two in Phuket, and one each in Krabi, Satun, Trang, Chumphon, Nakhon Si Thammarat, Yala and Songkhla.

The 19,982 new cases reported Tuesday included 19,930 transmitted inside Thailand. The remaining 52 were detected in arrivals from 18 countries, led by 21 from the United Kingdom, four from Australia and four from Singapore.

Vaccinations continued to progress, with 131.32 million doses administered as of Monday; 80.3% of the population have received at least one dose of the vaccine, 72.8% two shots and 35.6% at least one booster shot.

On Monday, 28,057 Covid-19 patients were discharged from hospitals after recovering from the coronavirus.

The accumulated death toll stood at 26,289 since the beginning of the pandemic, including 4,591 so far this year. 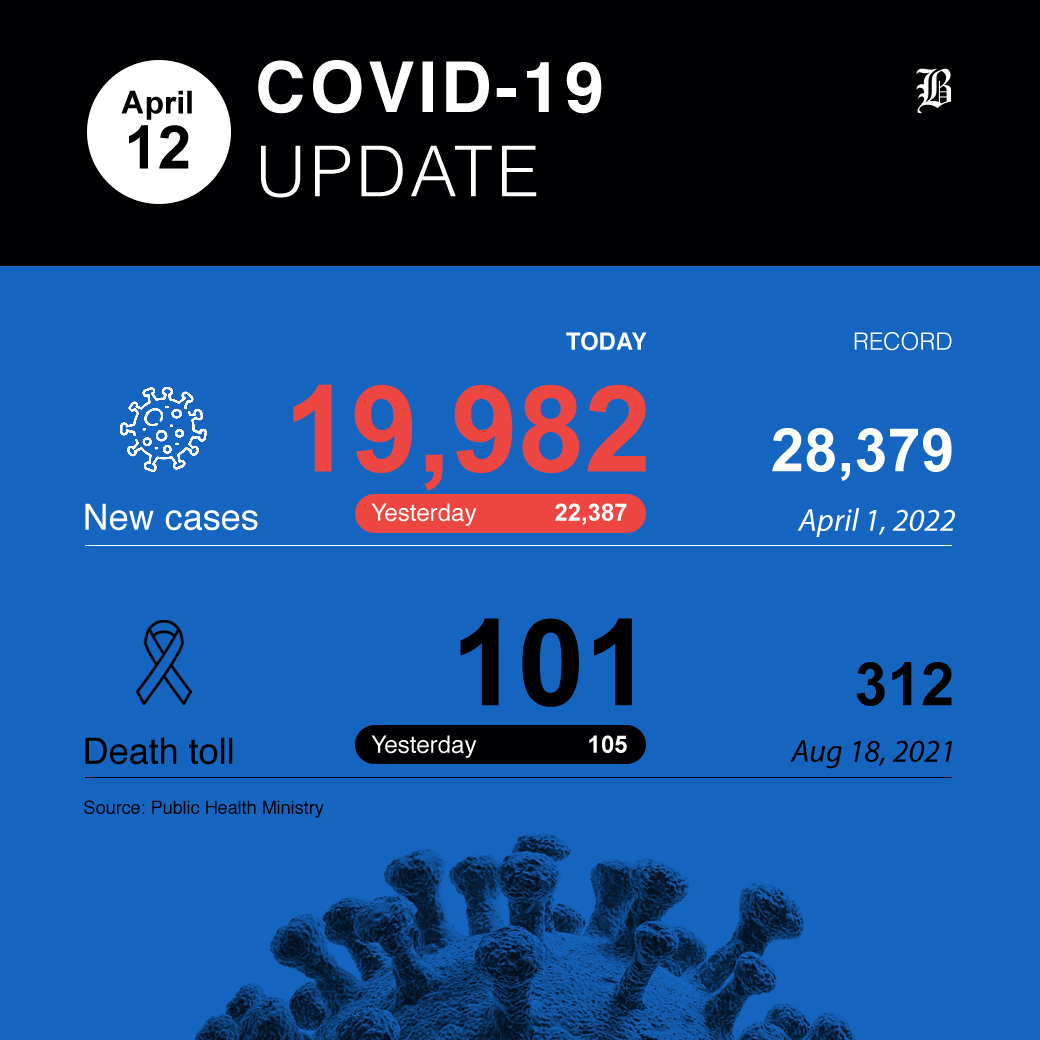