Locals and tourists celebrate the Songkran festival on Khaosan Road, Bangkok, on Thursday. The government has banned water-splashing during Songkran to help limit the spread of Covid-19. (Photo: Arnun Chonmahatrakool)

Friday’s figures did not include 9,313 positive results from antigen tests over the past 24 hours. This would raise the total to 29,602.

This compared with the 115 coronavirus-related deaths and 24,134 new cases reported on Thursday morning.

As of Thursday, a total of 224,905 people were receiving Covid-19 treatment, including 65,240 in hospitals, 54,491 in hospitel facilities and 109,063 in home/community isolation, according to the daily update posted by the Department of Disease Control.

Of those in hospital, 2,024 were seriously ill patients with lung inflammation and 872 dependent on ventilators.

Of the seriously ill patients, Bangkok had the most cases at 206, followed by 94 in Samut Prakan, 76 in Chon Buri, 75 in Nakhon Ratchasima and 67 in Buri Ram, the Centre for Covid-19 Situation Administration (CCSA) reported on Friday afternoon.

According to the CCSA, the 119 people who died were aged from two to 99 with the average age of 74. Two were from Myanmar and the rest were Thais.

Bangkok logged 14 new deaths and there were 11 in adjacent provinces.

Other central plains provinces further from the capital had 31 deaths in 13 provinces.

There were 20,179 new cases in the general population, 42 among prison inmates and 68 imported ones.

Of the new infections in the general population, 20,105 were confirmed at hospitals and 74 via mass testing.

The 68 imported cases came from 22 countries, led by 13 Thai returnees from Saudi Arabia. 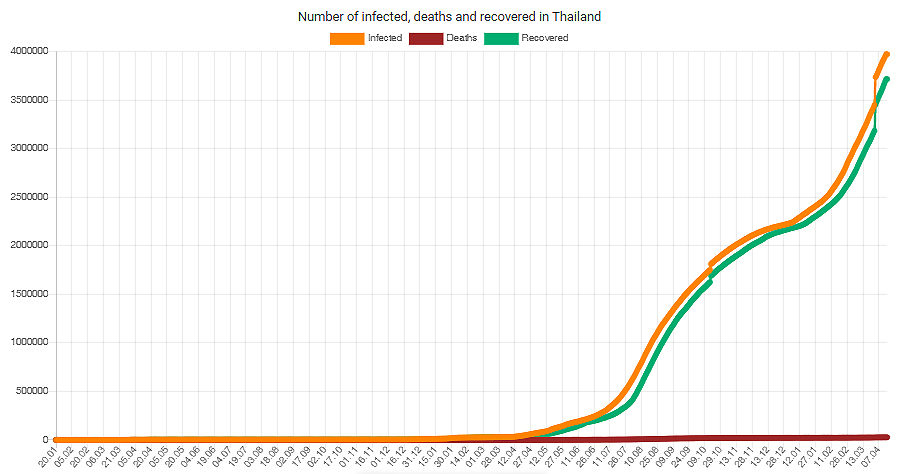 Vaccinations continued to progress, with 131.63 million doses administered as of Thursday. The CCSA said 80.5% of the population have now received one dose of the vaccine, 72.8% have received two shots and 35.9% have got a booster shot.

The accumulated death toll stood at 26,629 since the beginning of the pandemic, including 4,931 so far this year.