Police arrest Kittipong Phaethaisong, a suspect in the lone gold heist at a shop in Nakhon Ratchasima on Tuesday, in Pattaya on Friday. (Photo: Prasit Tangprasert)

A gold robber who made off with gold necklaces worth around 4.5 million baht in Nakhon Ratchasima on Tuesday was apprehended in Pattaya, Chon Buri, on Friday.

Kittipong Phaethaisong, 28, was arrested in the holiday resort city and was taken back to the northeastern province for questioning, said Pol Lt Gen Somprasong Yenthuam, commander of the Provincial Police Region 3.

The suspect's motive behind the gold heist was that he was jobless and ran out of money, the officer said.

Authorities confiscated some stolen necklaces and were searching for the rest.

On Tuesday, Mr Kittipong held up Yaowarat Krungthep gold shop at Lotus's hypermarket in Nakhon Ratchasima's Muang district and ran away with 51 gold necklaces each of 3-baht weight, or 153-baht weight in total, worth about 4.5 million baht.

The items were stolen in a matter of 20 seconds. 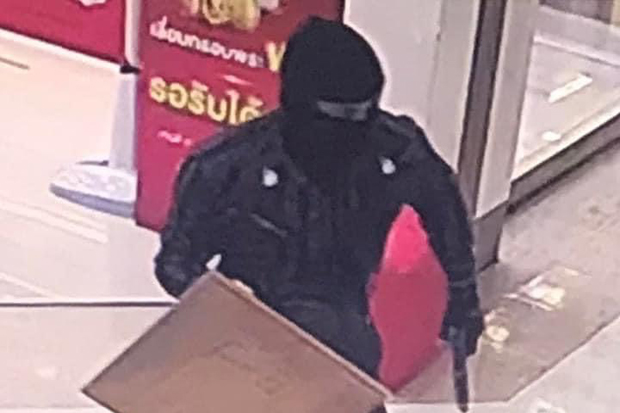 A picture captured from a security camera shows Kittipong Phaethaisong fleeing after the gold heist.

Police tracked the suspect using footage of security cameras at the hypermarket and closed-circuit television cameras installed along the routes where he fled on a motorcycle without a licence plate.

Police did not say the reason he escaped to Pattaya.