A mother takes her child under the belly of an elephant statue during a visit to Wat Sakhla in Samut Prakan’s Phra Samut Chedi district on Saturday. They wear face masks due to the Covid-19 outbreak in the country. (Photo: Somchai Poomlard)

Daily Covid-19 cases fell by more than a thousand to 17,775, the government said on Sunday, but new fatalities rose to 128, a record during the Omicron phase of the pandemic.

On Saturday, 24,545 Covid-19 patients were discharged from hospitals after recovering from the coronavirus, while a total of 214,554 people were receiving Covid-19 treatment, including 57,729 in hospitals.

The remainder included 51,446 in hospitel facilities and 104,689 in home/community isolation, according to the daily update posted by the Department of Disease Control.

Of those in hospital, 2,079 were seriously ill patients with lung inflammation, with 911 dependent on ventilators.

Of the seriously ill patients, Bangkok had the most cases at 215, followed by 92 in Samut Prakan, 81 in Nakhon Ratchasima, 80 in Chon Buri and 68 in Kanchanaburi, the Centre for Covid-19 Situation Administration (CCSA) reported on Sunday afternoon.

According to the CCSA, the 128 people who died were aged from three to 95 with an average age of 78. One was from Myanmar, another’s nationality was unknown and the rest were Thais.

Bangkok logged 15 new deaths and there were 11 in adjacent provinces, led by four each in Samut Prakan and Nonthaburi.

Other central plains provinces further from the capital had 37 deaths across 16 provinces, led by seven in Nakhon Sawan and six in Lop Buri.

The North reported 25 deaths in nine provinces, led by six each in Sukhothai and Tak.

The Northeast saw 29 new fatalities in 13 provinces, led b by four each in Nakhon Ratchasima, Kalasin and Si Sa Ket.

The South had 11 deaths, led by four in Songkhla. 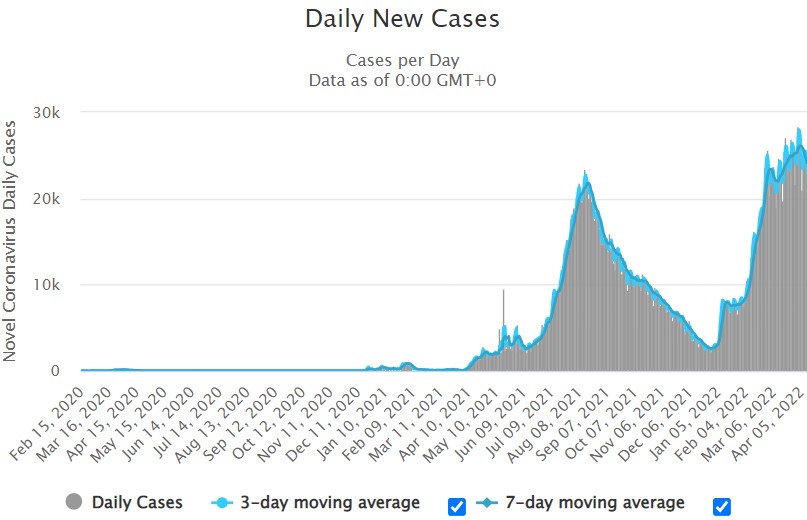 All but 82 of the 17,775 new cases announced Sunday were transmitted inside the country's borders. The imported cases came from 19 countries, led by 35 Thais from Saudi Arabia.

Vaccinations continued, with 131.67 million doses administered to date. As of Saturday, 80.5% of the population have now received at least one dose of the vaccine, 72.9% at least two shots and 35.9% at least one booster shot.

The accumulated death toll stood at 26,882 since the beginning of the pandemic, including 5,181 so far this year.

Global Covid-19 cases rose by 556,924 in 24 hours to 504.33 million. The worldwide death toll reportedly went up by 1,593 to 6.22 million, but since that increase was less than half that of the previous day, the figure is likely inaccurate. 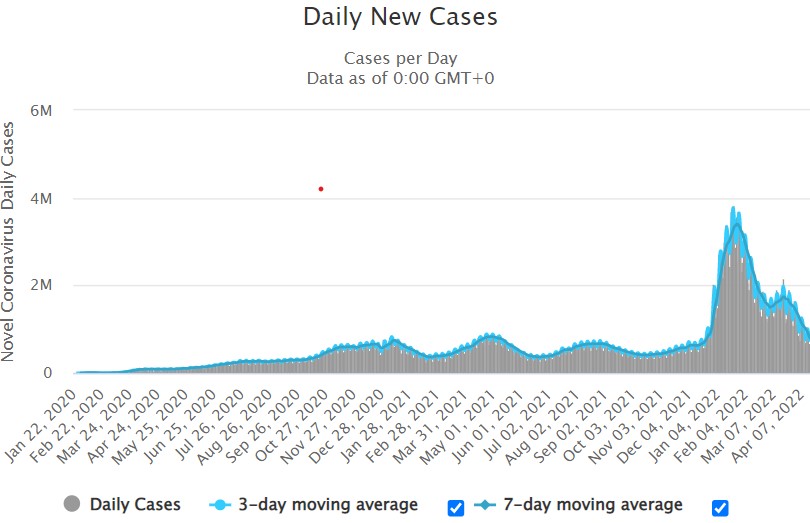 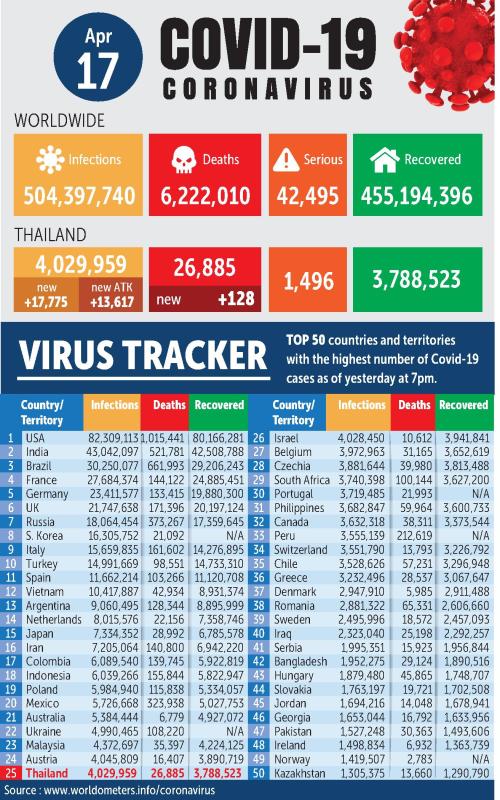