People wait to get Covid-19 vaccinations in Bang Sue Grand Station. The service resumed after the end of the long Songkran holiday on Monday. Anyone living or working in Thailand can walk in and receive their first, second, third or fourth shot. (Photo: Varuth Hirunyatheb)

The country registered 129 daily Covid-19 fatalities, an increase of five and a record during the current wave of the epidemic, the Public Health Ministry announced on Tuesday morning.

During the same 24-hour period, 24,927 Covid-19 patients were discharged from hospitals after recovering from the coronavirus

Of the seriously ill patients, Bangkok had the most cases at 207, followed by 93 in Nakhon Ratchasima, 89 in Samut Prakan, 87 in Chon Buri and 64 in Suphan Buri, the Centre for Covid-19 Situation Administration (CCSA) reported.

Bangkok logged 27 new deaths and there were 13 in adjacent provinces - five in Pathum Thani, four in Samut Prakan, two in Nonthaburi and once each in Samut Sakhon and Nakhon Pathom.

Other central plains provinces further from the capital had 27 deaths, including four in Kanchanaburi; three each in Sing Buri, Saraburi, Chachoengsao and Phetchaburi, and two each in Rayong, Ayutthaya and Prachuap Khiri Khan.

The North reported 15 deaths - four in Kamphaeng Phet, three in Sukhothai, two each in Tak, Chiang Rai and Phitsanulok, and one each in Uttaradit and Lampang.

The Northeast saw 34 new fatalities - six in Nakhon Ratchasima, five each in Ubon Ratchathani and Maha Sarakham, four in Loei, three each in Surin and Udon Thani, two each in Mukdahan, Sakon Nakhon and Khon Kaen, and one each in Chaiyaphum and Nong Khai.

The South had 13 deaths - four each in Nakhon Si Thammarat and Chumphon, two in Songkhla and one each in Satun, Pattani and Yala.

The accumulated death toll stood at 27,135 since the beginning of the pandemic, including 5,437 so far this year. The 16,891 new cases announced on Tuesday consisted of 16,787 in the general population, 19 among prison inmates and 85 new arrivals from other countries.

The imported cases came from 28 countries, including 12 from Australia, 10 from Germany, eight from South Africa and seven from the United Kingdom.

Of the new infections in the general population, 16,769 were confirmed at hospitals and 18 via mass testing. 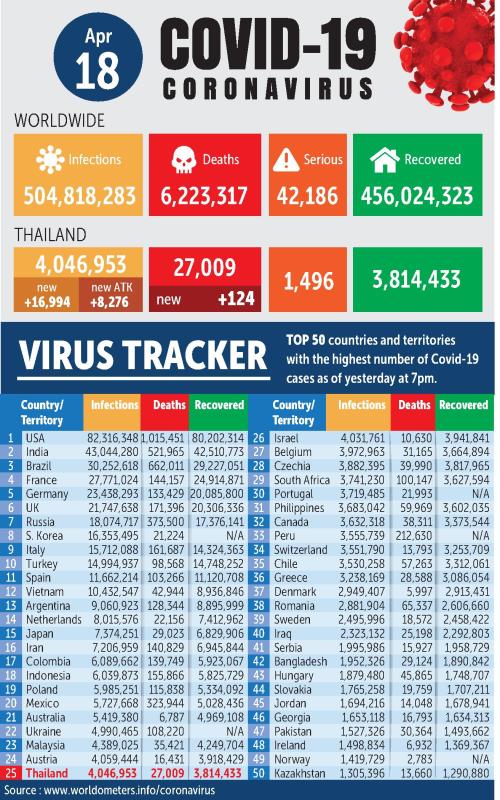