Covid-19-infected people with mild symptoms receive medicines at a newly-opened Drive Thru service at a public van station in Pathum Thani’s Thanyaburi district on April 18, 2022. The service is operated by the Public Health office and is open from 10am to 6pm daily. (Photo: Apichit Jinakul)

Friday’s figures did not include 19,936 positive results from antigen tests over the past 24 hours. This would raise the total to 39,988.

This compared with 21,808 new cases and 128 coronavirus-related fatalities reported on Friday morning.

As of Friday, a total of 188,342 people received Covid-19 treatment, including 45,847 in hospitals (down from 49,711 the previous day). The remainder were in hospitel facilities or in home/community isolation, according to the daily update posted by the Department of Disease Control.

According to the Centre for Covid-19 Situation Administration (CCSA), the 129 new fatalities were aged from one to 102 years , with the average age of 75. There were 70 men and 59 women. Two were from Myanmar and the rest were Thais.

There were 19,972 new cases in the general population, 32 among prison inmates and 48 imported ones.

Of the new infections in the general population, 19,878 were confirmed at hospitals and 94 via mass testing. 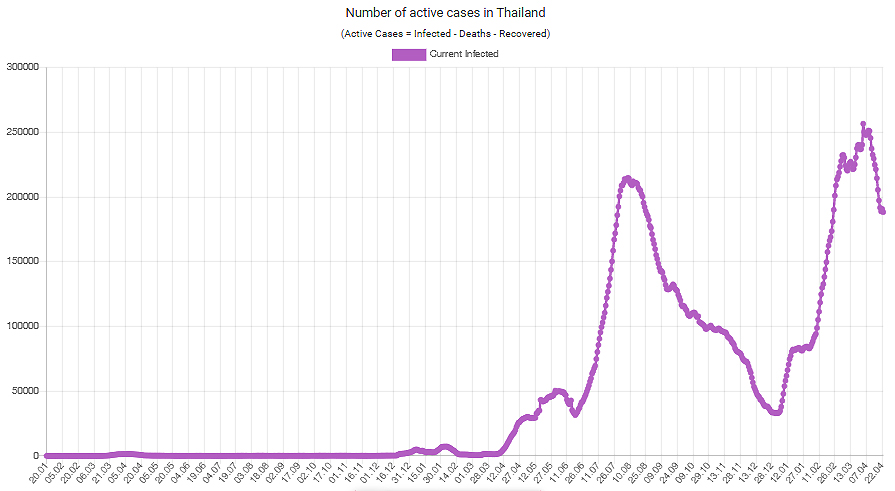 Bangkok reported 21 more deaths, and there were five in adjacent provinces.

Other provinces in the Central Plains logged 35 new deaths. The Northeast reported 44 deaths, the North saw 16 fatalities, and the South had eight deaths.

The 48 imported cases came from 21 countries, including eight arrivals from France, six from the United Kingdom, five from Singapore and four each from Switzerland and Australia.

Vaccination continued, with 132.27 million doses administered. As of Friday, 80.7% of the population had received one dose of the vaccine, and 73.2% had received two shots, and 36.4% had got a booster shot.

The accumulated death toll stood at 27,649 since the beginning of the pandemic, including 5,951 so far this year. 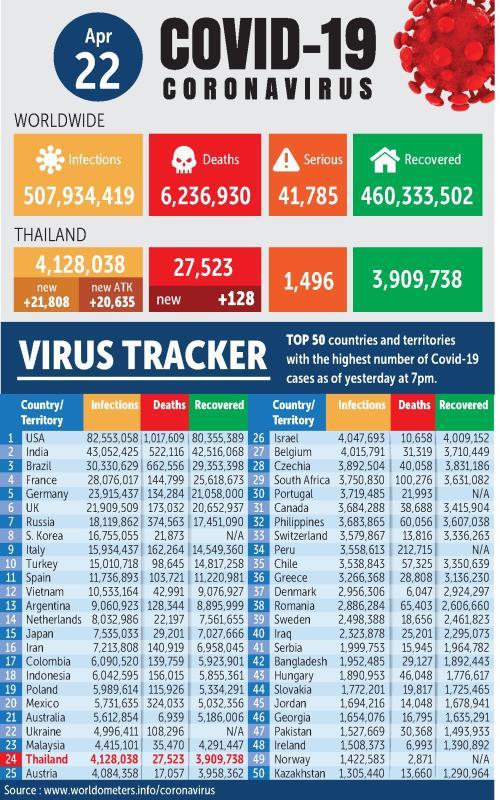