Health workers provide Covid-19-infected people who are asymptomatic or have mild symptoms with relevant medicines in a drive-through clinic in Pathum Thani province on April 18. (Photo: Apichit Jinakul)

The country registered 13,816 new Covid-19 cases during the previous 24 hours, 1,178 fewer than the previous day and the fifth straight daily decline, the Centre for Covid-19 Situation Administration (CCSA) announced on Tuesday morning. Daily fatalities fell by four to 120.

The new case figures did not include 7,009 positive results from antigen tests over the past 24 hours. This would raise the total to 20,825.

Of the seriously ill patients, Bangkok had the most cases at 169, followed by 89 in Nakhon Ratchasima, 73 in Kanchanaburi, 64 in Suphan Buri and 62 in Khon Kaen.

On Monday, 21,072 Covid-19 patients were discharged from hospitals after recovering from the coronavirus while 167,124 others were receiving treatment (down from 174,500 on the previous day).

Recoveries have outpaced confirmed new infections every day but one since April 9. 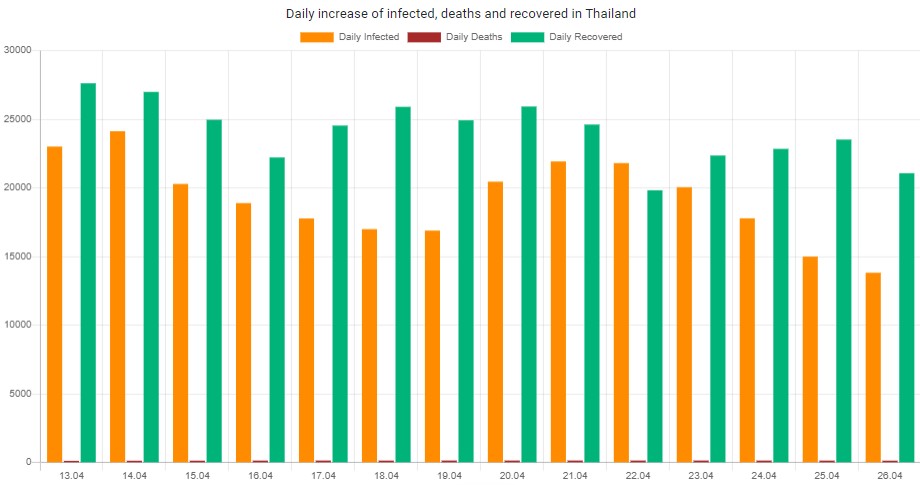 The 13,816 new cases comprised 13,758 in the general population, one prison inmate and 57 arrivals from other countries.

Of the new infections in the general population, 13,691 were confirmed at hospitals and 67 via mass testing.

The 57 imported cases came from 17 countries. They included 14 from Laos, seven from the United Kingdom, six from Germany and four from Singapore.

According to the CCSA, the 120 people who died were aged from two to 106 years and included two Myanmar nationals and one Chinese.

Bangkok logged eight new deaths and there were seven fatalities in adjacent provinces - three each in Pathum Thani and Nakhon Pathom and one in Samut Prakan.

Other central plains provinces further from the capital had 40 deaths - five in Uthai Thani, four each in Nakhon Nayok and Kanchanaburi, three each in Ratchaburi, Prachuap Khiri Khan, Prachin Buri, Sing Buri and Saraburi, two each in Lop Buri, Ayutthaya, Rayong and Chon Buri and one each in Chanthaburi, Ang Thong, Nakhon Sawan and Phetchaburi.

The North reported 18 deaths - six in Chiang Mai, four in Phichit, three in Phitsanulok and one each in Lampang, Sukhothai, Chiang Rai, Uttaradit and Nan.

The South had 12 deaths - three in Nakhon Si Thammarat, two each in Chumphon, Yala and Krabi and one each in Phuket, Songkhla and Satun.

The accumulated death toll stood at 28,019 since the beginning of the pandemic, including 6,321 so far this year. 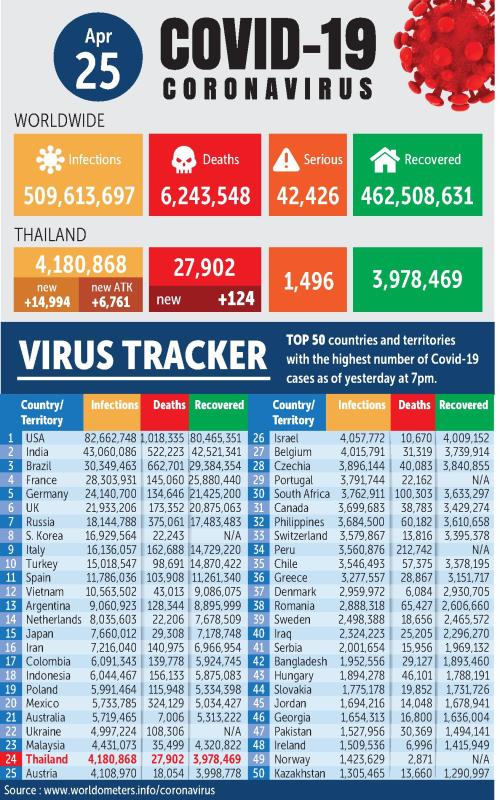