A child shows a V sign during his Covid-19 vaccination at the Bang Sue Grand Station in Bangkok. (Photo: Varuth Hirunyatheb)

This compared with the 125 coronavirus-related fatalities and 14,887 new cases reported on Wednesday morning.

The new case numbers did not include 11,396 positive results from antigen tests over the previous 24 hours, which would raise the total to 25,833.

Of those in hospital, 1,827 were seriously ill patients with lung inflammation (up from 1,822) including 850 dependent on ventilators (unchanged).

Of the seriously ill patients, Bangkok had the most cases at 160, followed by 87 in Nakhon Ratchasima, 77 in Khon Kaen, 71 in Kanchanaburi and 59 in Samut Prakan.

“The bed occupancy rate among yellow and red-coded patients drops from 30% in past weeks to 24.1%,” said Centre for Covid-19 Situation Administration (CCSA) spokesperson Sumanee Wacharasin.

Bangkok logged 11 new deaths and there were five fatalities in adjacent provinces - two each in Nakhon Pathom and Nonthaburi and one in Samut Prakan.

Other central plains provinces further from the capital had 39 deaths - nine in Chon Buri, four each in Prachin Buri and Suphan Buri, three each in Ratchaburi, Phetchaburi and Nakhon Sawan, two each in Lop Buri, Kanchanaburi, Ayutthaya and Saraburi and one each in Uthai Thani, Sing Buri, Nakhon Nayok, Rayong and Trat.

The North reported 12 deaths - three in Chiang Rai, two each in Chiang Mai, Phichit, Sukhothai and Phayao and one in Kamphaeng Phet.

The Northeast saw 51 new fatalities - 10 in Sakon Nakhon, eight in Roi Et, seven in Udon Thani, six in Maha Sarakham, four in Si Sa Ket, three each in Kalasin and Nong Khai, two each in Loei, Nong Bua Lam Phu and Khon Kaen and one each in Nakhon Ratchasima, Buri Ram, Nakhon Phanom and Amnat Charoen.

The South had nine deaths - two each in Surat Thani, Songkhla and Nakhon Si Thammarat and one each in Ranong, Satun and Pattani. 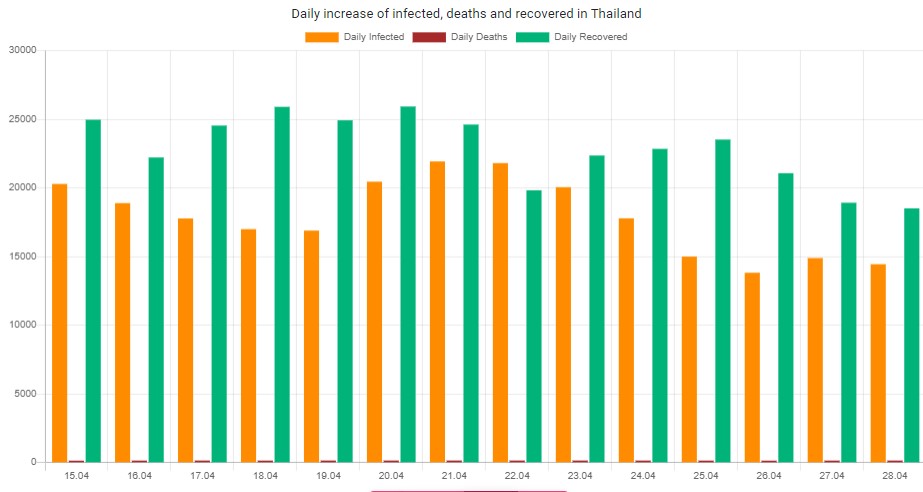 The 14,437 new infections announced Thursday comprised 14,336 in the general population, 24 among prison inmates and 77 in arrivals from other countries.

“New cases in the country are declining, contrary to our earlier expectation they would rise after the Songkran festival,” Dr Sumanee said.

Of the new infections in the general population, 14,229 were confirmed at hospitals and 107 via mass testing.

The 77 imported cases came from 20 countries. They included 18 from Laos, 11 from the United Kingdom, seven each from Australia and Cambodia, six from France and five from Singapore.

The accumulated death toll stood at 28,271 since the beginning of the pandemic, including 6,573 so far this year.

In the CCSA briefing on Thursday, Dr Sumanee also reiterated the centre’s recent resolutions to ease Covid-19 controls in the country and restrictions on arrivals which will take effect this Sunday. 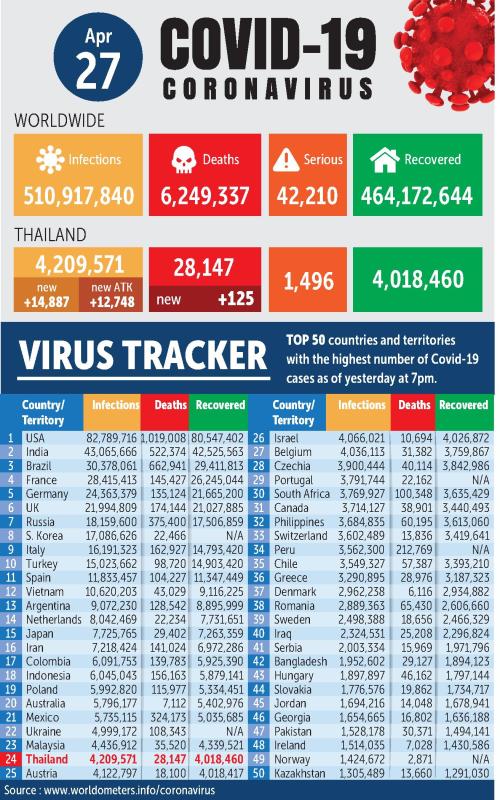