Nightspots still have to wait to reopen

As the overall Covid-19 situation in the country has significantly improved, the Ministry of Public Health on Monday resolved to lower its Covid-19 alert level from Level 4 to Level 3, allowing most members of the public to resume their daily activities with fewer restrictions.

However, those over the age of 60, those suffering from an underlying medical condition which could be exacerbated by Covid-19, and those who have yet to be fully vaccinated will still have to avoid doing certain activities which could increase their infection risk, said Dr Opas Karnkawinpong, director-general of the Department of Disease Control.

A fully vaccinated individual, he said, should have received at least three Covid-19 vaccine shots.

The adjustment from Level 4 to Level 3 was approved by the ministry's committee tasked with directing its medical and public health operations.

This committee works separately from the government's Centre for Covid-19 Situation Administration (CCSA).

Under the Level 3 Covid-19 alert, most people are advised to only avoid visiting entertainment venues or crowded places. All other activities that were previously prohibited and/or discouraged under the Level 4 alert are now permitted, Dr Opas said. 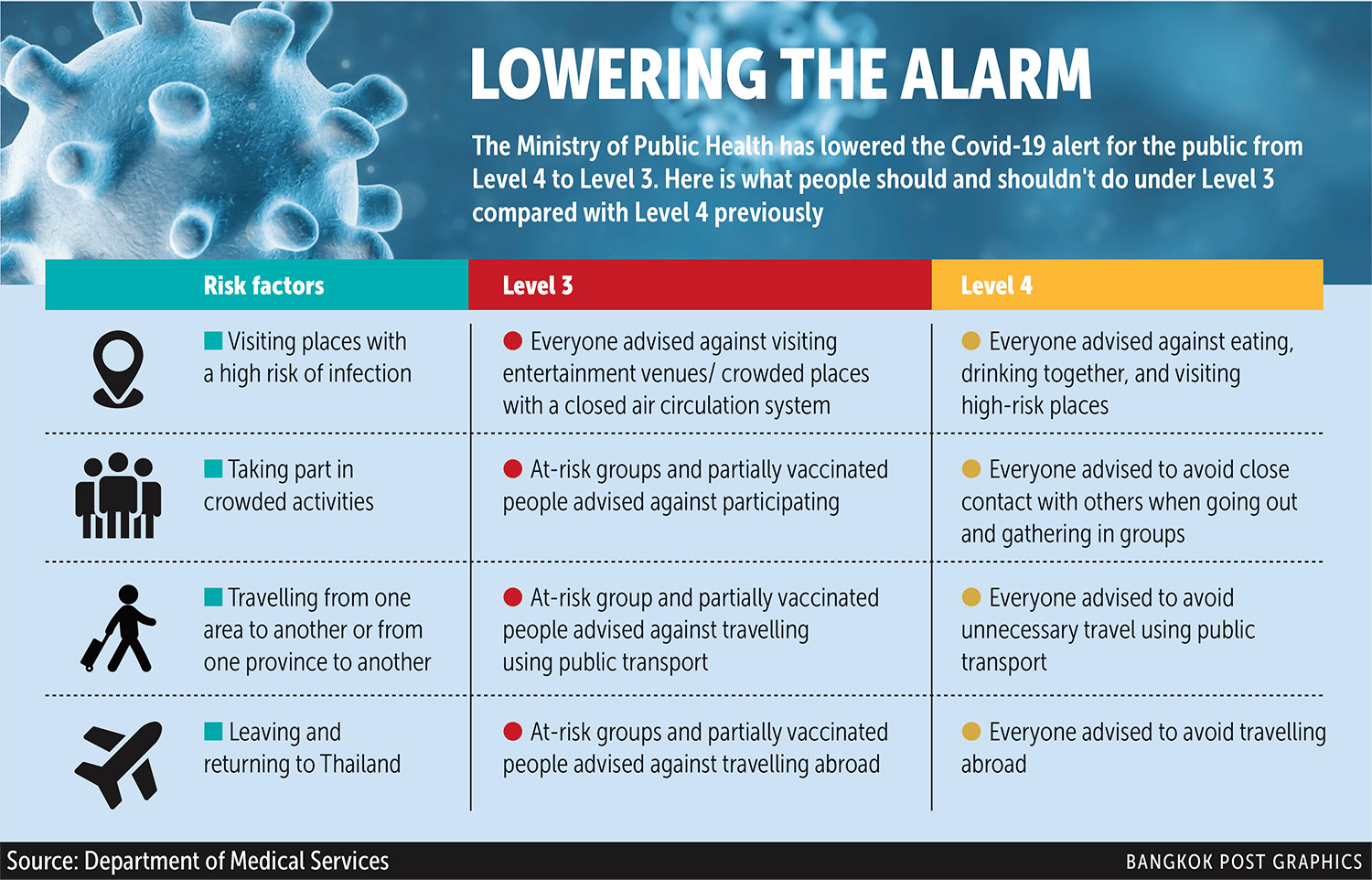 That said, people in the aforementioned risk group are still advised to avoid unnecessary travel from one province to another, as well as abroad.

Infections have stabilised across 23 provinces, while the remaining 54 provinces are seeing continuous improvements in their outbreak situation, which altogether indicates that the country is heading to the post-pandemic stage where Covid-19 will be officially declared an endemic disease, he said.

That said, infections may rise again when the new school term begins later in the month.

To avoid another mass outbreak, the Public Health Ministry wants to make sure over 90% of teachers, other staff and students aged 12-17 are fully vaxxed and boosted before they return to school, Dr Opas said.

When asked about the growing pressure on the government to allow night entertainment venues to reopen, he said the matter will be discussed by the CCSA at its next meeting.

"Although the Covid-19 situation has improved significantly, the risk of a sudden change is still there," he said.

In order to allow all people to resume their daily activities as soon as possible, all provinces are now encouraged to pay extra attention to at-risk groups and speed up the provision of Covid-19 booster shots.

"It's believed the CCSA will ease the rest of the restrictions when at least 60% of the risk groups have been fully vaccinated," he said, before noting that authorities are pleased with the progress of vaccinations in Bangkok and its surrounding provinces.

Separately, a group of tourism, restaurant and night entertainment business operators on Monday petitioned the government to speed up the easing of the remaining Covid-19 restrictions.

They urged authorities to allow pubs, bars and karaoke parlours to partially resume operations starting next month and to fully reopen on July 1, when the government plans to declare Covid-19 an endemic disease.

"Covid-19 shutdowns and restrictions have cost businesses more than a hundred billion baht in losses," said Sa-nga Ruangwatthanakul, president of the association of business operators on Khao San Road.

Along with the reopening of night entertainment venues, the group also called for the termination of the Thailand Pass registration system for foreign visitors.

Prime Minister Prayut Chan-o-cha said he was pleased by the fact that over 300,000 visitors have entered Thailand since the government scrapped the Test & Go programme, said government spokesman Thanakorn Wangboonkongchana.

The PM expects at least 300,000 visitors to arrive each month until September, the start of the tourism high season which runs until December, he said.